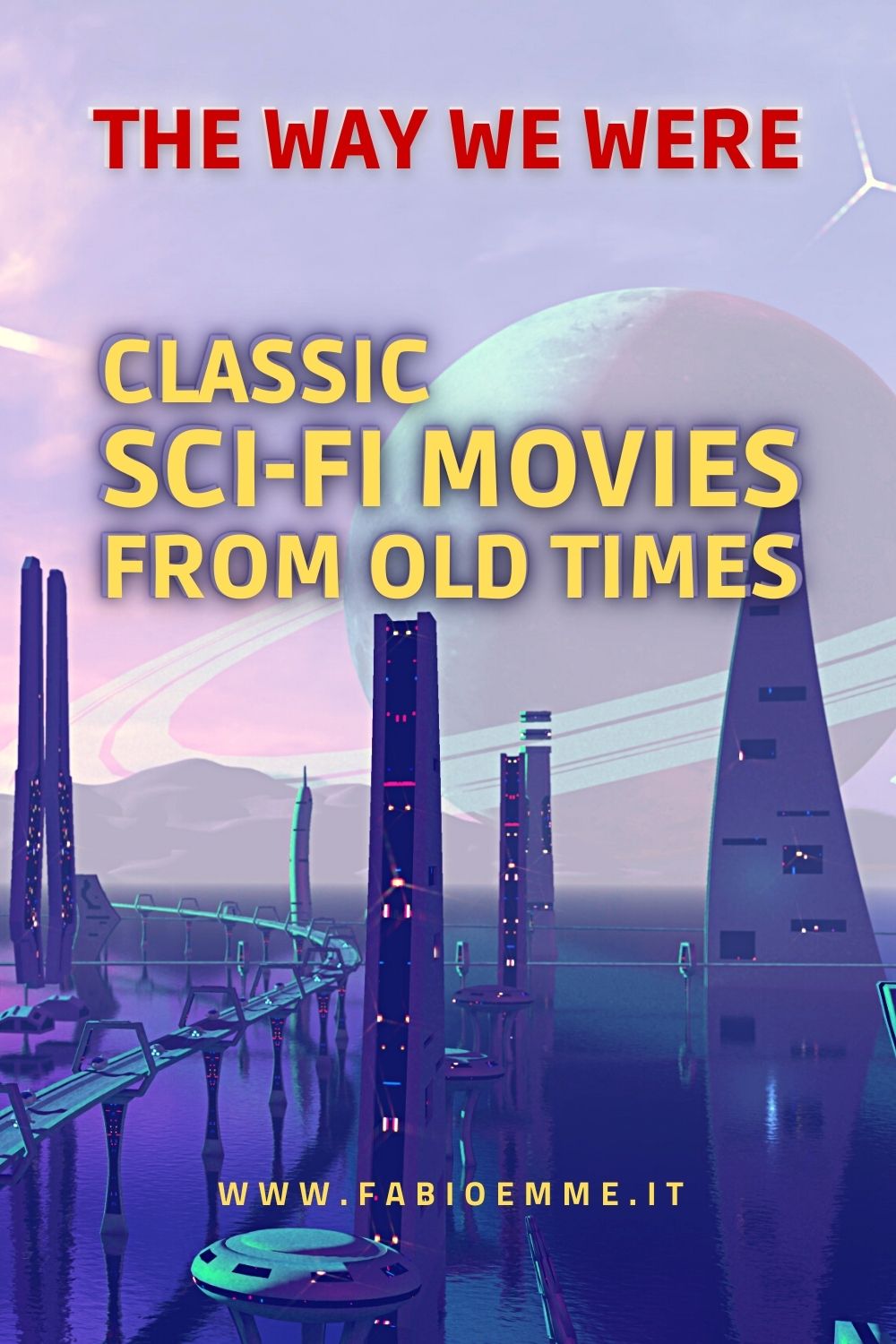 Everything new and modern needs the classic to grow and thrive, like anything in life, even in sci-fi movies.

This post does not mean criticizing the younger generation since it is no one’s fault to be born before or after a particular period in history.

Indeed, all movies I’m going to talk about today are probably unknown to my generation brothers from the late 70s.

Some people are not curious enough about cinema or have much free time, so they only watch the latest releases.

It is different for other people, although I don’t understand why those who have no interest in black and white cinema consider it a waste of time.

I can understand how some special effects can be ridiculous compared to modern digital computer post-production.

Also, old horror movies lack contemporary gore and violence due to the severe censorship in those days and not by the filmmakers’ choice.

However, if we can go beyond these prejudices, we may discover an immense filmography of imaginative and creative creations.

Back then, when they couldn’t achieve with technical means, they overcame these lacks with narrative ideas and directorial choices.

With all that said, let’s take a closer look at three classic sci-fi movies that I discovered and appreciated only as an adult.

Let’s start with a movie from one of the greatest sci-fi writers of all time, H. G. Wells.

This story prophetically hypothesizes for the distant 1936, the beginning of a second terrible worldwide conflict.

It’s a war whose citizens don’t even know why seeing only warplanes raining down bombs devastating their cities.

After decades of these brutal bombings, the situation seems to be returning to normal.

People are starting to live again from the ruins of civilization, facing new diseases and famines.

But having most of the past knowledge, the society returns to a rough condition where a few small military groups are in charge.

One of these commanders is determined to repair a fleet of planes, not realizing that he doesn’t even have the fuel to fly them.

Nonetheless, he continues to harass a young mechanic and his family to get them to fix that pile of junk.

Until one day, a perfectly working airplane lands near their town, and a black-clad man comes out.

The man claims to be part of a scientific community that intends to rebuild civilization.

But this time without a government or an army, but with a world of peace, science and culture.

Obviously, fearing losing power, the military boss will not agree with this project and prepares his men for the final battle.

A world war where everyone loses

After many years of practicing as a co-director, William Cameron Menzies is directing a movie on his own for the first time.

During the production of Things to Come, his extensive experience in set design and special effects paid off.

H. G. Wells supervised his work day after day, advising him on the most effective way to shoot the various scenes.

This collaboration has a huge impact on the atmosphere of the entire story.

An epic that starts in the ’70s arriving at the far future of underground metropolis and space travel.

Fascinating is the beginning with the war sequences, so well done that they almost seem the ending of Stanley Kubrick‘s Dr. Strangelove.

The pacifist soul of this film is evident, such as the general distrust towards humankind always willing to use violence.

It is no coincidence that rebels still emerge ready to subvert the social order even in the future.

In a world where everyone has resources and wealth, someone will always exist ready to destroy everything for their whims.

Wells, therefore, admires the genius and resourcefulness of the individuals capable of creating beautiful inventions for everyone’s benefit.

At the same time, however, he cannot understand how rough and ignorant individuals can often gain power.

This dualism of love and madness is perhaps in our nature and will never change, written in the depths of our DNA.

But fortunately, along with dictators, there will always be someone willing to fight for reason and justice.

We now turn to another pacifist sci-fi movie, an absolute classic cult directly from the 1950s.

The story begins in the United States capital, on an ordinary day like any American citizen.

Suddenly a mysterious spacecraft descends from the skies, immediately setting off panic for the city.

The army surrounds the area believing it to be an alien invasion and preparing to counterattack.

However, a well-dressed man gets out and politely demands to talk to government representatives from all over the world.

The authorities refuse any dialogue and try to take him prisoner, but he escapes by blending in with the city crowd.

Not knowing what to do, they seize his spaceship and the colossal robot that seems to stand guard menacingly.

The alien takes refuge at a house where a woman rents him a room, taking time before deciding what to do.

Indeed, his orders are to talk to governments to make them understand to stop ruining the planet.

But if the primary objective should fail, he must activate the deadly robot that will mercilessly exterminate humanity.

Nevertheless, while spending time alongside humans, he realizes that politicians may not represent the best of humanity.

At that point, he must make a final choice for our planet while the police and the army continue to hunt him relentlessly.

The aliens’ ultimatum towards human madness

The Day the Earth Stood Still is another of the masterpieces of Robert Wise, one of the most influential American filmmakers.

He created numerous cult movies such as the first Star Trek, The Andromeda Strain, or Somebody Up There Likes Me.

A career where he is not afraid to try different genres, always leaving his unique and recognizable authorial imprint.

This sci-fi masterpiece of his marks a turning point in the usual canons of the alien invasion.

This invasion could lead to the extinction of humankind, but this time only for our stubborn inability to change.

Indeed, the aliens just want us to stop polluting the planet, threatening us only when we refuse to listen.

Among the many scenes, I want to remember the ending with the iconic Klaatu, Barada, Nikto! with which you can command the killer robot.

The great Sam Raimi takes this phrase, word for word, for his brilliant and entertaining Army of Darkness.

A quote that comically veers into parody when the legendary Bruce Campbell uses it badly as a spell to fight zombies.

Of this movie, they made a remake in 2008 starring Keanu Reeves, unfortunately absolutely to forget.

This 1951 movie, however, is absolutely to remember, along with the entire filmography of Robert Wise’s immense generational talent.

Finally, we talk about a movie from one of my favorite sci-fi horror novels of all time, the great classic I Am Legend by Richard Matheson.

Hollywood tried several times to bring this story into theaters, but I believe only this Italian-American production achieved it.

We talk about a dystopian future where vampires have entirely wiped out humanity for the few who did not know the story.

The only survivor lives utterly alone in the house of his family, who also died during the apocalypse.

He just aims to survive day after day, killing all the vampires he can before sunset and then taking shelter at night.

However, he doesn’t lose heart and holds on, assault after assault, enduring against the monster army besieging his home relentlessly.

Slowly he begins to study medicine, eventually discovering what virus is the origin of the human mutation in these bloodthirsty beasts.

But soon, he discovers this virus is mutating, changing the vampires into wiser beings who are rebuilding a new society.

At that point, he becomes public enemy number one in this new social order.

Indeed, he killed so many vampires that he became a monster for them, like the vampires before were a legend toward us humans.

A novel with countless influences over the future

I Am Legend is undoubtedly one of the novels that have most influenced cinema.

It is no coincidence that George Romero took its structure and transformed it into his debut, the famous Night of the Living Dead.

Or we can also mention two great cult films by John Carpenter, such as Assault on Precinct 13 and The Thing, which owe a lot to Matheson’s novel.

All of these movies have protagonists trapped by or with monsters, obviously adding their own ideas and style.

Returning to The Last Man on Earth and the literary origin of the movie, we also have a great lead actor, Vincent Price.

A true monster of cinema, if you’ll pardon the irony, capable of holding much of the time alone on the scene.

His acting is as solid and crazy as the role deserves. Without neglecting, of course, the fundamental weakness of an increasingly psychologically unstable character.

It is an immense performance that surpasses Charlton Heston and Will Smith in the following cinematic versions of this novel.

Finally, directors Sidney Salkow and Ubaldo Ragona made the best use of a modest budget.

The set design and costumes are effective between light and shadow, creating a bleak and oppressive atmosphere.

In short, you may have guessed I have a slight glow about this movie. So, without hesitation, I passionately suggest it as an unforgettable, timeless masterpiece.