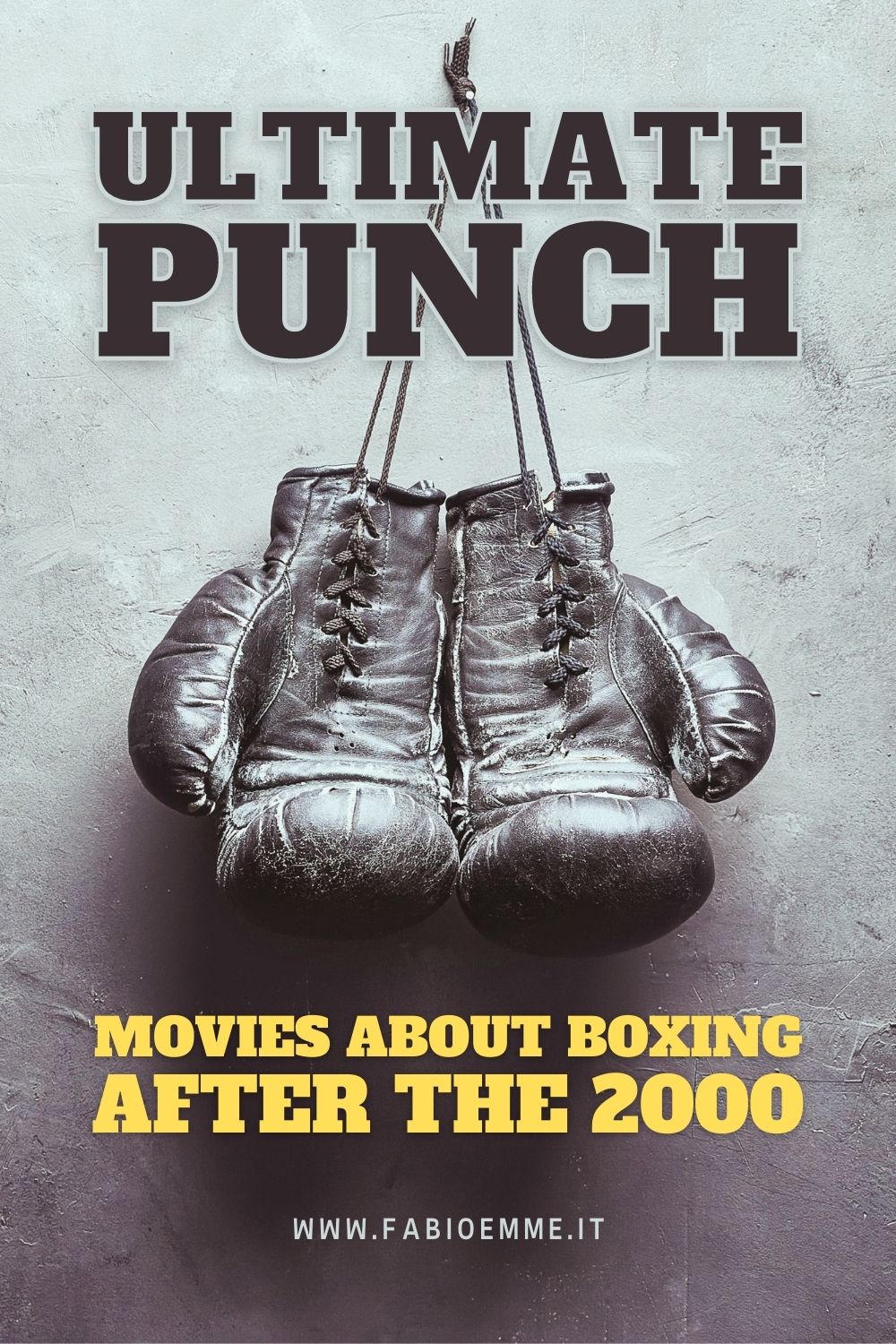 The boxing world provides countless ideas to the movie industry, which has responded through many cults over time.

The first that probably occurs to everyone from my generation, between the 70s and 80s, is Rocky by Sylvester Stallone.

The film is one of the most iconic of the sports genre, beloved around the world, and an Oscar winner.

Moreover, it marked the career debut of the famous actor/director and a long sequel and spinoff saga.

A few years later came the exceptional Raging Bull, placing another milestone in the history of cinema.

Even better than Rocky, it was the creation of a master like Martin Scorsese and starring a monster like Robert De Niro.

Going back even further in time, among my absolute favorite boxing movies, I must mention Somebody Up There Likes Me.

I’ve talked about it before and because, generally, I have a poor memory, and I’ll definitely talk about it again in the future.

I remember one of the best performances of Paul Newman, an actor who’ a myth crossing all generations.

But in recent years, let’s say from 2000 onwards, what exciting movies about boxers and boxing have hit theaters?

Let’s find out together looking closely at three different stories, yet bound together by their protagonists’ fighting gloves.

If the title wasn’t already clear enough, this movie focuses on one of the most well-known boxers of all time, Muhammad Ali.

More specifically, we take a close look at the most critical and challenging years of his entire career.

The story starts from his conquest of the world’s heavyweight champion’s title after defeating the reigning champion, Sonny Liston.

Because of his notoriety and the large audience that loves him, the Nation of Islam welcomes him into its ranks.

In recognition of his talents, they allow him to change his name from Cassius Marcellus Clay Jr to Muhammad Ali.

While his man and boxer life seem to proceed at peak, bad news comes for him from the American justice system.

Indeed, refusing to serve in the army, they arrest, convict, and deprive him of the champion title.

From that point on, the boxer will face a long standstill period, during which he cannot legally enter a ring anymore.

Meanwhile, there was a civil war for black rights across the nation, culminating in the murder of his close friend Malcolm X.

Although suffering from his situation and America’s general problems, Ali doesn’t lose heart, continuing to train.

Finally, the Supreme Court rewards his patience and overturns the verdict, giving him a new opportunity to arise.

This epic match will occur in Zaire against the gigantic George Foreman, younger and stronger, to become a champion again.

The best Fresh Prince of Bel-Air you’ve ever seen

Ali isn’t just a great boxing movie, and it’s one of my favorite movies of the last 20 years ever.

Will Smith, an actor that everyone universally loves, reaches the highest point of his career with a mind-blowing performance.

It’s a complete catharsis that he achieves through hard training, physical and mental, side by side with the boxer for months.

Putting muscles on his shoulders and studying closely the mimicry and behavior of the grand champion, his transformation is impressive.

At the direction, the marvelous Michael Mann perfectly recreates the violent revolutionary atmosphere of the 60s and 70s.

In addition, the fights are perfect, closely shot with style and elegance, feeling the blows and the hard sweat of the boxers.

We then mention the magnificent supporting cast, starting with Jamie Foxx playing Bundini, a passionate friend and motivator.

The trainer role includes the veteran Ron Silver, who is always faithful and close to the boxer throughout joy and difficulties.

Another important character in Ali’s life was the journalist Howard Cosell, with the great actor Jon Voight.

They often pretended to fight for the amusement of the audience on his TV show, but they were close friends.

He may not be on the level of Denzel Washington in Spike Lee‘s film, but it’s still a performance to remember.

In short, it is an unforgettable sports movie, where boxing is only a part of the great drama.

Here we go with another movie and another boxer to draw inspiration from for a boxing story.

In this case, the main character is a boxer who, like Mike Tyson, ends up in jail on a rape charge.

A sentence that brutally interrupts his career after he just succeeded in winning the title of world champion.

In prison, he immediately clarifies to everyone that they better not piss him off by savagely beating some inmates.

Unfortunately for him, the head of the guards and a powerful underworld boss have different plans for him.

Indeed, inside the cell, another boxer often fights clandestinely with inmates from other prisons.

After many years and many opponents, however, no one has defeated him yet.

So everyone is eager to know who is the stronger of the two champions, in and out of prison.

Initially, the boxer is not interested, trying to work things out with his lawyers and manager.

But he eventually accepts the challenge, especially when the crime boss makes it clear that he could reduce his incarceration.

At that point, there is great interest around the match, triggering millions of dollars of illegal betting.

The boss, however, demands that both men fight according to a particular regulation, with longer rounds and more dangerous gloves.

Finally, the whole prison waits patiently for the big day of the fight, watching these two athletes train.

Only one of these warriors will be the real champion, in a match the outside world will never know happened.

A movie about the harsh nature of boxing

Undisputed is the last 2002 work of Walter Hill, legendary director of unforgettable cult films like The Warriors and The Driver.

This boxing movie will mark a 10-year long break, finally interrupted in 2012 with the entertaining Bullet to the head starring Sylvester Stallone.

I do not understand why back then and even today, people do not talk much about this movie, in which I can not find any flaw.

The pace of the story travels without interruption, creating an environment of stereotypical but hilarious characters.

The action scenes with fights work great, almost not worth mentioning considering the director’s cinematic skills.

Moreover, the actors’ casting is perfect, bringing charisma to a script that is sometimes naive but certainly doesn’t lack personality.

The confrontation between the boxers is outstanding, featuring two stars like Ving Rhames and Wesley Snipes brutally facing each other.

The newcomer is pompous and selfish, meaning what the prisoner realizes he could have become without prison.

So their challenge is not just a fight between two boxers, but literally a war between the free world and the world behind bars.

We then have two old actors perfect in their parts who close the group with great class and irony.

Michael Rooker is the rough but savvy guards chief boxing enthusiast that works against his employers to organize everything.

Finally, the fabulous Peter Falk is the former crime boss, now prisoner, completely devastating in his irony and wisdom towards everything and everyone.

In short, I repeat, a boxing movie I do not understand how it can not like, recommending from years to anyone to watch it.

Coming to the last film, we talk about a boxer on his way down who gets one previous comeback upsetting the boxing world.

His name was James J. Braddock, a solid heavyweight who sadly ends working on the docks after a lousy hand fracture.

Indeed, he had invested all his wealth in a cab company when the Great Depression suddenly took all his money.

At that point, the man had to accept all kinds of menial jobs to support his family through many difficulties.

One day, his agent miraculously manages to arrange a fight for him.

The challenger is a great boxer of national fame, whose opponent is injured at the last moment.

Although without training, Braddock succeeds in winning over the general amazement of the journalists and the public.

From that moment on, he climbs the rankings fighting and bravely defeating other great boxers such as John Henry Lewis.

The people praise him for every victory, looking at him as the unfortunate ordinary man who finally gets a second chance.

This series of fights finally brings him face to face with the crazy Max Baer, obviously the favorite of the odds.

All over America awaits the final fight at Madison Square Garden, where Braddock will get his last chance in life to win the final prize.

Cinderella Man is the most romantic of these three boxing movies, led by dreamy American filmmaker Ron Howard.

We must admit that the story emphasizes perhaps a little too much, sometimes, on the feelings and misfortune of the protagonist.

But I forgive this somewhat childish naivety because the director stages a great period spectacle.

During that difficult time of economic recession, unfortunately, many people were starving and freezing in the streets.

As the main face of this pain is Russell Crowe, in this case, a gladiator with gloves who thought his career was over.

The brilliant actor portrays the boxer’s humility perfectly, along with his strength of mind and resistance against his opponents.

Next to him, equally dignified and brave is the beautiful and sweet Renée Zellweger.

Just as she fears the fate of her children, she is equally concerned about her husband’s physical integrity.

I believe the best of the entire cast is Paul Giamatti, absolutely irresistible as a manager looking for a deal at any cost.

But in reality, he is also the boxer’s friend and living the same financial dramas, albeit pretending otherwise.

Finally, there’s the big final enemy, perhaps a bit exaggeratedly arrogant and evil, with the face of Craig Bierko.

The actor only appears halfway through the film, but he convincingly plays Max Baer’s crazy glee and murderous violence.

In conclusion, this is a perfect boxing film for the American dream.

A dream that many idolize and others insult, but I think it sometimes brings hope on the hardest darkest days.