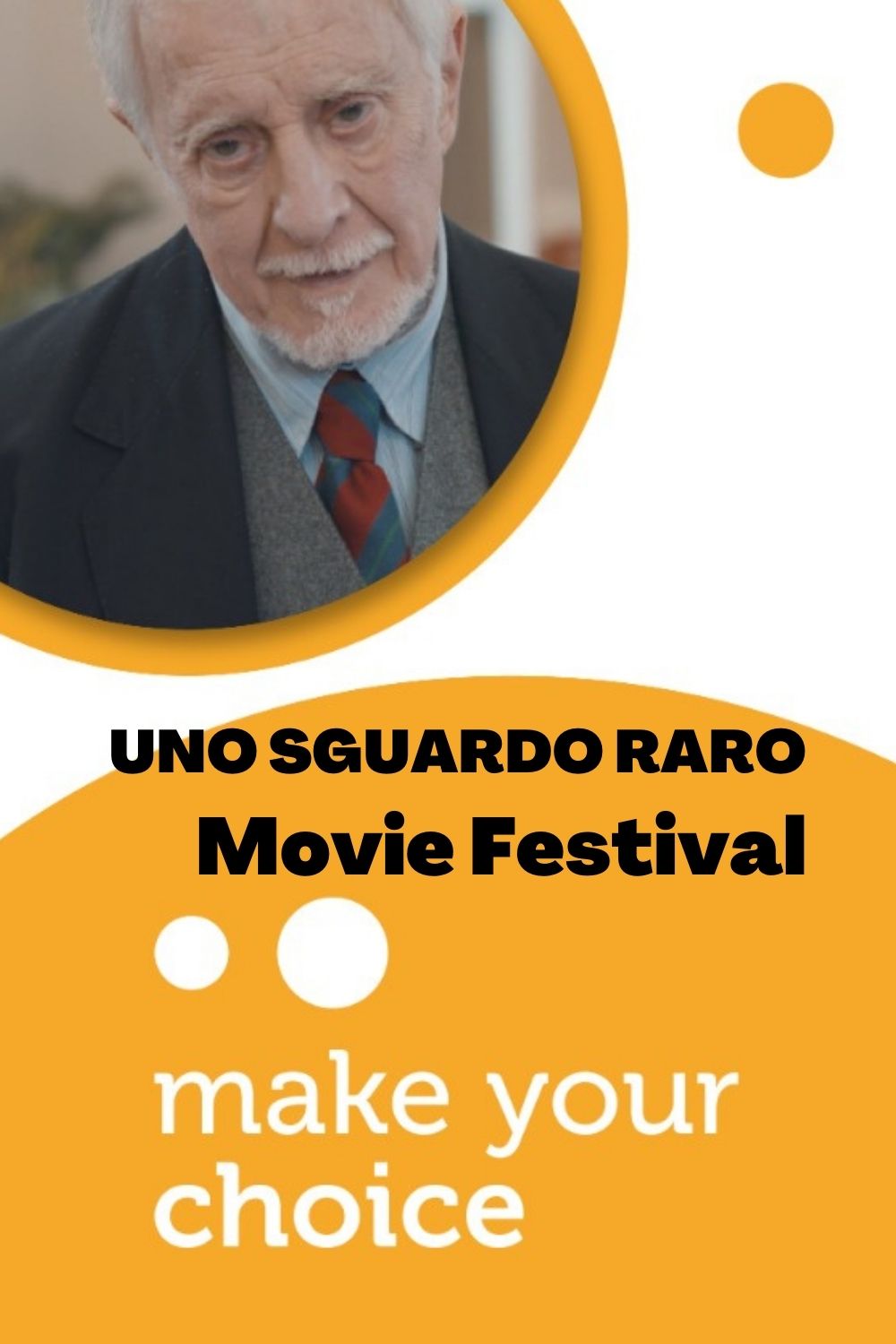 In short, these are three sliding door stories in which every choice makes a difference for yourself and others.

The presentations of the awareness campaign #MakeYourChoice continue.

Last in order of time, at the sixth edition of Uno Sguardo Raro, Rare Disease International Film Festival, held at the Casa del Cinema in Rome.

The festival arose to break the isolation that surrounds people with rare diseases through the language of cinema.

Subsequently, the promoters also established the Make Your Choice Award in collaboration with Sobi Italia.

During the award ceremony of the festival, Neri Marcorè and the Lega del Filo d’Oro earn the solidarity prize with the following motivations:

“The tenacity and enthusiasm of the Lega del Filo d’Oro have been woven are already characteristics to be rewarded. But the Jury selected it for the courageous choice to give hope even to those who have none. We want to open a window on the world of deaf-blind people when disability still lived with many taboos”.

The Make Your Choice Award, in its first edition, is dedicated to associations, caregivers, protagonists of the world of cinema, entertainment, culture, art, science, entrepreneurship.

Summing it up simply, all those have made a difference in the world of solidarity thanks to their choices.

“#MakeYourChoice is a sliding doors solidarity key reversing the perspective, inviting users to play the role of the protagonists and decide for them. It engages for the authenticity of the content and the ability to activate the audience. Characteristics that we also find in the Awardees of this first edition of Make Your Choice, whom we thank for their commitment to the deafblind community”.

“The idea of this award comes from the awareness that there are so many people in our country who choose to commit themselves to help others. We believe that it is important to make known those who, by choosing not to look the other way, change the course of things”.

The Award takes its cue from a campaign of UNIAMO FIMR Onlus, the Italian Federation of Rare Diseases, and Uno Sguardo Raro Rare Disease International Film Festival realized with the support of Sobi.

Through social media and a dedicated website (www.make-your-choice.), the Campaign tells patients’ points of view, stories, and testimonies.

A set of useful information to deepen the knowledge of rare diseases, starting from hemophilia, the first disease represented.

MakeYourChoice – The intertwining of different lives

The core of the MakeYourChoice campaign is a solidarity short movie with three protagonists very different in age, interests, passions, lifestyles.

But these characters are united by the dilemma of a choice that can change their lives: choose to give up their dreams or take charge of their destiny and free their lives.

The video intersects and binds the fates of the three characters in an emotionally engaging way.

Not only and not so much because all three experience their respective dilemmas in the lobby of the same hotel.

All this because the effects of the decisions made by each of them are potentially crucial to the others.

Moreover, the story of each – in itself separate – can become the engine of the choice of others.

Therefore, different figures join the dilemma of choice, which becomes a call to action for the viewer.

The multiple-choice short film allows viewers not only to follow the fate of each of the protagonists.

But it also allows each of them to choose the ending of their personal story.

It is an invitation to step inside someone suffering a rare disease, making every day a choice for their life.

The VII MonitoRare Report on the condition of people with rare diseases in Italy, drawn up by Uniamo – Federazione Italiana Malattie Rare Onlus, provided the framework on epidemiology.

Therefore, there has been a steady growth in the number of rare diseases tested in Italian clinical laboratories.

All results come into the Orphanet database in the last five years, which have increased by almost 1,000.

One person with a rare disease out of five of those included in the RRMRs is under 18 years old.

At the beginning of 2020, UNIAMO Federazione Italiana Malattie Rare Onlus had about 130 affiliated associations, increasing nearly 12% compared to the previous year and almost 30% compared to 2018.

The constant increase in affiliations demonstrates the goodness of the solidarity federative action, perceived at all levels.

The number of Italian associations of people with rare diseases rises to 650.

At the end of 2020, 15 Regions have included the topic of rare diseases within the general health planning tools (in force or the process of approval in 2020) or that have defined a Regional Rare Disease Plan.

The limit established in Europe is one affected person per 2,000. A disease can be rare in one region but frequent in another.

There are approximately more than 6 thousand rare diseases, featuring a great diversity of disorders and symptoms.

These symptoms vary from one disease to another and between patients with the same condition.

Rare diseases currently affect 3.5% to 5.9% of the world’s population.

72% of rare diseases are genetic, while others result from infections (bacterial or viral), allergies, and environmental causes or are degenerative and proliferative.

70% of rare genetic diseases begin in childhood, and while it is true that almost all genetic disorders are rare.

It is not equally valid that all rare diseases have a genetic origin; there are sporadic infectious diseases, autoimmune diseases, and rare carcinomas.

The cause of many rare diseases is still unknown today. Rare diseases are severe, often chronic, and sometimes progressive.

They can occur as early as birth or childhood or appear in adulthood.

Due to the degenerative aspects of these diseases, patients may not have or lose autonomy with severe deterioration of quality of life or even risk losing it.

Only by expanding knowledge and raising public awareness can we exchange good practices, stimulate efforts in social solidarity, and, why not, even in research.

[CREDITS – The short film is written and produced by Save the Cut].

UNIAMO – Federazione Italiana Malattie Rare Onlus is the Federation of Associations of People with Rare Diseases of Italy.

With the mission of improving the quality of life of people affected and their families, it conducts advocacy activities to protect and promote rights in research, bioethics, health, and social welfare policies.

These activities take place also at the European level as the National Alliance of EURORDIS-Rare Disease Europe.

UNIAMO was founded in 1999 by twenty associations that felt the need to unite efforts for this problem.

A choice that has allowed us to share solutions to alleviate the condition of disorientation, loneliness, and pain.

It represents the whole Italian community of people with Rare Diseases, which includes about 1,200,000 individuals.

We carry out this work through advocacy actions and recognition at an institutional level in specific working groups.

Uno sguardo raro (www.unosguardoraro.org) was born in 2016 to Claudia Crisafio, author and actress, and Serena Bartezzati, a rare disease sufferer and communication professional.

They embraced a widely held solidarity belief by Ingmar Bergman:

“There is no art form like cinema to strike the conscience, shake the emotions and reach the secret rooms of the soul.”

In 2018 it became the first and only international film festival on the topic.

Through an international call for entries, we promote the best short films, documentaries, and awareness spots.

The organizing machine of the festival is the association Nove Produzioni, founded by the president Claudia Crisafio with the support of members belonging to the world of cinema and the community of rare patients, to organize the film event Uno Sguardo Raro.

At SOBI, we have made research in rare diseases our mission.

We’ve called ourselves solidarity pioneers, and every day we refuse to accept the status quo.

Because having witnessed the challenges faced by the many people with rare diseases has taught us to find new ways to help them and make their lives better.

Each year, we invest 12% of our revenue in research and development to bring innovation to hematology, immunology, and specialty care studies.

We were among the first to clone DNA to produce a recombinant treatment for hemophilia.

In addition, we made treatments for previously hopeless diseases, such as hereditary tyrosinemia type 1, available.

We bring something rare to rare diseases with the power of our focus and new life chances for people.

These are patients we serve through our 1500+ employees in Europe, North America, the Middle East, Russia, and North Africa.

This is a strength we are proud to call rare, encapsulating it in our logo: Sobi rare strength.

While our headquarters are in Stockholm, we work in 25 countries in Europe and in North America, the Middle East, Russia, and North Africa.

In addition, we distribute medicines in more than 70 countries worldwide.

We have been present in Italy since 2008.

For more information about MakeYourChoice:

It Follows – The Strange Nightmare...