Easy Rider – The way of freedom for the American Bikers 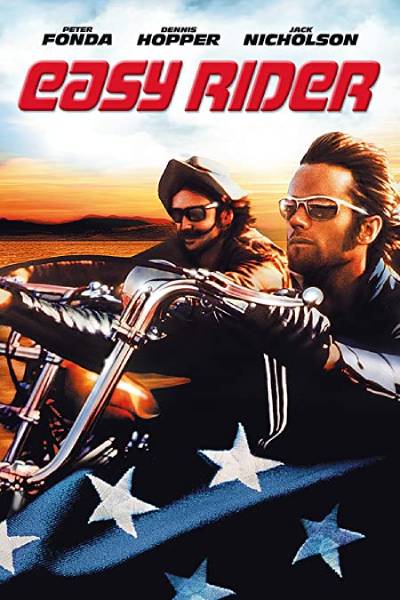 Easy Rider is a movie that was out in theaters well before I was born, narrating American 1968 through some bikers’ eyes.

We certainly can’t describe them as the good guys in the traditional sense of the word.

On the contrary, at the very beginning, we see them smuggling drugs across the border, doing business with traffickers.

However, the two friends are certainly not violent, loving to live each day as a challenge to find new adventures.

Having just earned a large sum of money, they have every intention of relaxing and partying.

Therefore, they take two Harley-Davidson choppers to go to New Orleans, hoping to arrive in time for the carnival.

For them, it will be a long journey full of personal and philosophical encounters and experiences.

Many of these experiences will be interesting pleasures, such as meeting small hippie communities living in the desert.

Along the way, though, they’ll also encounter the hostility of many other people.

One example is when they ride their bikes through a city parade, without scaring anyone but still getting into trouble.

Indeed, the local police hate the guys looking like they are, arresting and putting them into jail with little thought.

Fortunately, behind bars, they meet a young lawyer with whom they immediately bond.

The boy, as the son of a well-known local politician, manages to convince the tough local cops to release them.

Thus, they decide to continue their journey to New Orleans with their friend, who really appreciates their American bikers lifestyle.

Unfortunately, along the way, ordinary people will still have a lot of hatred towards them.

As well as they reject violence in any form, in the end, it will be violence finding them.

Talking about freedom is not living free

Easy Rider is one of the most significant on-the-road films ever, marking a huge step forward in independent cinema.

During the two bikers’ journey, we admire the wide and wonderful range of American landscapes and never-ending roads.

However, along with this beauty, we also find the contrasting aspects of the stars and stripes culture.

Paradoxically, the outsiders live peacefully and quietly, while the inhabitants of small towns are vulgar and ignorant.

In particular, perhaps this is an overstatement of cliché that this narrative forces to lead to exactly what it meant.

Yet this exaggeration explains freedom’s meaning, especially the difference between the one who talks about it and who lives it.

The protagonists are far from ordinary people’s lifestyles, those spending their whole time between work and family.

They prefer an unattached existence, with no permanent home or salary, opting to travel perpetually from one place to another.

This way of life may or may not be liked, everyone has their own personal opinion about it.

But it is undeniable that such people are mostly peaceful with no desire to oppress others.

Likewise, we can discuss their constant use of all kinds of drugs that we see in every scene of the movie.

It is a personal choice that is criticizable all you want, again, but it is harmless against any other person.

What is dangerous is the people’s attitude, who knows nothing and judge them only by their appearance.

Unfortunately, these are topics about which you can hardly discuss peacefully with anyone, most of the time.

This is an ignorance that politicians exploit to gain influence and power, not caring about other people’s freedoms as always.

The brilliant sunrise of the new Hollywood

Dennis Hopper directs one of the films that will make the so-called New Hollywood a legend meant to upset everything.

Easy Rider was only a small, independent production eventually becoming a popular flag and leading to a fundamental cultural transformation.

This movement started from the widespread youth discomfort in the USA during the war in Vietnam and Nixon’s presidency.

It soon expanded on a large scale, involving all kinds of artists and cultures throughout the rest of the world.

Among the various different artistic movements, music and cinematography were the most striking examples.

Out of this period, a great number of brilliant directors emerged, with a radically different style than before.

Just to name a few, we owe directors like Steven Spielberg, Woody Allen, or Sam Peckinpah to this period.

Dennis Hopper does not only direct but also plays one of these bikers, along with his American friend Peter Fonda.

What they interpret as these free spirits riding their choppers will forever shock the international imagination.

Their journey becomes an unforgettable epic, shaping the minds of many men and women of tomorrow.

This is a timeless adventure with the magnificent rhythm of the soundtracks that accompany us mile after mile.

Just to name one, the memorable beginning with the amazing Born to Be Wild by the Steppenwolf would be enough.

Moreover, the friend they will find along the way is the notable and sneering Jack Nicholson, so crazy as irresistible.

In short, Easy Rider is a movie that nobody can miss in their culture, least of all any cinema enthusiast.

Even though I was born in 1978, I feel this masterpiece belongs to me just as it belongs to my parents back in their days.

Love or hate – Movies about...

Adrenalin – A Deadly Challenge In...