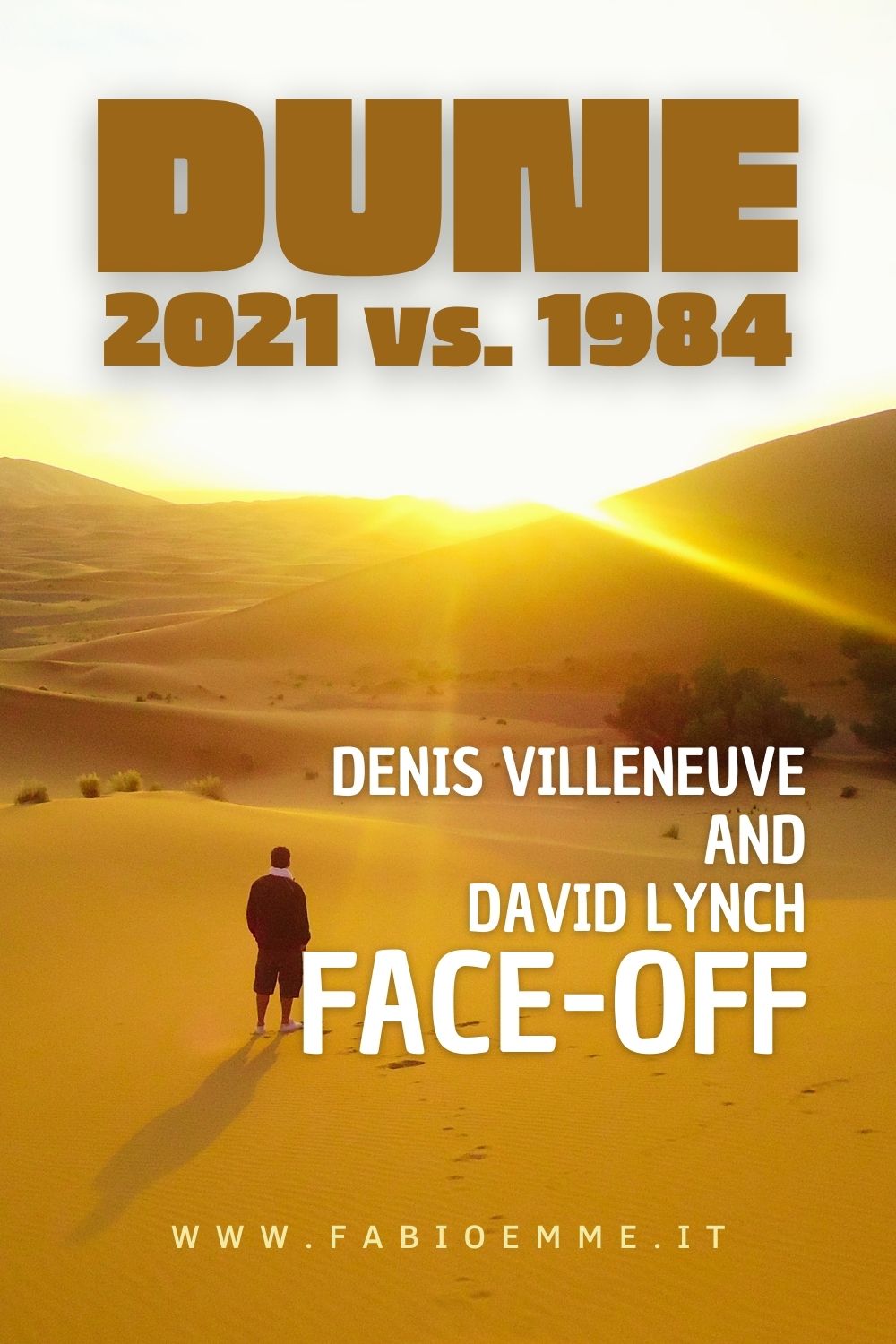 In a comparison between Dune of 2021 and 1984, we immediately make an intro that both Denis Villeneuve and David Lynch‘s movies are terrific.

The Atreides family epic on planet Arrakis is about magic and love, betrayal and revenge within an interstellar political scenario.

In short, Emperor Shaddam IV wants to destroy their lineage’s legacy without alienating the whole nobility of the galaxy.

Therefore, it lures this family into a trap at the edge of the universe, far from any help.

Giving them the lands of their ancient rivals, the Harkonnen, he provoked a war that the Atreides could not win.

However, fate awaits the only male child of this family, who will join the rebels of the Arrakis desert.

Indeed, the boy is the culmination of a prophecy that Bene Gesserit religionists have waited for centuries.

Through descent from his mother, a sorceress who introduces him to psychic powers, he will become the incredible Kwisatz Haderach.

He shall bend space and time to his will, gaining control of the Spice, the universe’s most precious substance.

Denis Villeneuve and David Lynch‘s Dune casts include some of the best actors and actresses from 2021 and 1984.

Let’s start with the main protagonists of the story, the members of the Atreides family.

As the son, I prefer Kyle MacLachlan, more believable and vulnerable in his performance. He was a fine actor, with the years, unfortunately, less and less present.

However, the new protagonist Timothée Chalamet gives a good catharsis to the subject, though without reaching the 1984’s Paul Atreides.

Rebecca Ferguson is better, more engaging, and more passionate as a runaway mother among the Lady Jessicas.

Francesca Annis was just as beautiful and sensual back then but felt colder with a less depth narrative background.

It is more difficult to talk about the two actors playing the father, Duke Leto Atreides. They are, respectively, Jürgen Prochnow for the old and Oscar Isaac for the new film.

I would establish a draw between them. Indeed, neither of the two actors is better, with an acting performance more or less of the same level.

Both have the stern regal poise that the role requires, equally bold as leaders and caring parents.

Last but not least, the confrontation between the two interpreters of the story’s villain was a must. We are, of course, talking about the cruel and oppressive Vladimir Harkonnen.

In this case, the significantly crazier and out-of-control Baron from 1984, Kenneth McMillan, wins.

A judgment I regret, as I adore the great Stellan Skarsgård, who defends the role properly in this new Dune.

As you can see, no cast outshines the other, with substantial equality of skill in both movies.

What is the air on the planet Arrakis in these two films?

Here the comparison gets exciting, and we see the fundamental differences between these two prominent productions.

The 1984 Dune boasts elegant and impeccable costumes than 2021, especially for the members of the great galactic aristocracy.

However, this elegance in no way detracts from the characters’ violence, such as the fluttering, sneering Duke Harkonnen.

The new film has the advantage of wide-field scenes, as the latest digital effects didn’t exist at the time.

Nevertheless, even the old desert scenes return the magnitude of the work and the fearsome power of the giant sandworms.

The 2021 movie has a sci-fi spirit much fresh and new, with a modern design for costumes, buildings, and spaceships.

It is no coincidence that this remake has more action soul than the previous one, with lots of fights and exciting desert chases.

But this action doesn’t distort the saga’s legendary epic, unleashing an enviable weapons arsenal and bio-tech fighters from the next future.

On the other hand, costumes and generally the staging of the sumptuous royal apartments seem more spartan and bare, although rather respectful.

In short, we have two distinct moods where I prefer the new film’s more Sci-Fi look while still appreciating the massive work on the 84 costumes and sets.

Finally, we get to the most critical comparison of any movie, the director’s work.

2021 and 1984 Dune movies both involve two imaginative filmmakers willing to think outside the box.

Unfortunately, 1984’s financiers didn’t help David Lynch much, holding him back entirely to complete the three-plus hour play he was planning.

As a result, the director must cut and re-edit the original footage without saying his opinion about the final cut.

In 2021 Denis Villeneuve is more fortunate, finding an audience already familiar with longer films and allowing him to split his work into two chapters.

However, we can measure the difference between these directors for what we have, comparing their ways and times in storytelling.

David Lynch once again is at a disadvantage, altering his usual crazy and visionary style to create a more classic work.

Nevertheless, some narrative ideas are remarkable, such as using characters’ thoughts as voice-overs, often contradicting their beliefs.

Unfortunately, the editing cuts make the final part extremely quick, thus failing to stage the warriors’ rebellion from the desert.

A part that we will get to in the next chapter of Denis Villeneuve, who so far brings in theaters much better this epic science fiction story.

In conclusion, in 84, it was a chance missed for the great master, while in 2021, here comes the half consecration of the Canadian director of Sicario and Blade Runner 2049.

Then, after so many words, which of these two excellent movies is ultimately the best?

Although we have yet to see the end of this 2021 remake, I would say it has the edge right now.

Maybe it will be because of the production problems I have told you about, castrating the grand cinematic vision project early on.

Perhaps, among the two challengers, Denis Villeneuve is more likely to be in the sci-fi genre.

I say this, of course, with all due respect to David Lynch‘s unquestionable talent, which movie lovers have known so well for decades.

On the contrary, I generally consider him a more original and avant-garde director, even though Villeneuve is one of the leading contemporary filmmakers.

However, today we are talking about Dune 2021, which, quite frankly, is much more impressive than the 1984 version.

Magic in the air is more tangible, political intrigue is much straightforward, and characters and narrative, in general, are much more straightforward compelling.

For whoever among you will be lucky enough to see it at the cinema, this is an explosion of pure joy to behold you not quickly forgotten.

Arrakis’ melancholic atmosphere of abandonment will enter your soul and never leave, becoming part of you.

Unless, as always (unfortunately) is possible, they do not screw everything up in the second chapter.

Easy Rider – The way of freedom for the American Bikers