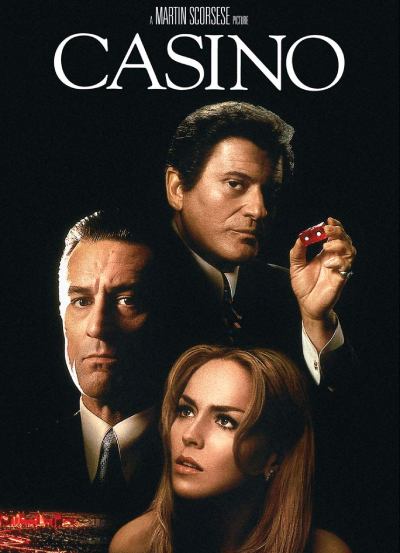 Casino is one of the best portraits, by a master like Martin Scorsese, about the criminal background behind the glittering lights of Las Vegas.

This story begins in the early 1980s when the city was still relatively peaceful and quiet.

The powerful Italian-American mafia, after a lot of investment, sends one of their trusty men to run a large casino.

The boy was famous as an infallible professional gambler who had never lost a bet in his life.

Shortly thereafter, a close friend joins him, helping to impose with force the gang domination of the city.

The man is a violent criminal who provides protection on their business, by mercilessly killing and torturing every rival.

In the beginning, business is booming, and the two friends even succeed in double that money-making machine’s value.

However, disputes with some local authorities threaten to ruin the business because of some silly arguments.

In addition, the ongoing police investigation about the violent friend exposes the gang to undesirable media attention.

In addition, the player marries a famous Las Vegas player, known by all for her intelligence and talent.

Their relationship soon deteriorates into a marriage full of hatred and resentment, with the woman only dreaming of running away.

In the end, this supposedly wealthy paradise turns into a nest crawling with old friends ready to kill each other.

What Happens in Vegas, Stays in Vegas

Martin Scorsese always loved talking about the crime world, achieving with Casino the ultimate maturation of his career.

The director gives an incredible rhythm flowing from the first to the last moment with his inimitable and unique style.

The characters’ years flow before our eyes with a perfect montage, which the soundtrack underlines gorgeously.

As usual, Scorsese alternates relaxed moments, almost like a comedy, with explosions of sudden violence and cruelty.

This world, where everyone seems to be friends and brothers, collapses miserably as legal and financial problems arise.

Therefore, the members of this so-called family of the Las Vegas casinos quickly escalate into murder and revenge.

Nobody is safe, including the bosses getting prosecuted because of a naive criminal talking too much at the FBI microphones.

As an Italian, I found these characters’ daily routines amusing, so close to the ancient culture of my country.

From dipping bread in tomato sauce to playing cards at the bar, some days it felt like home.

Even better, many of these elderly mob leaders remind me of the older people I know as my pleasant grandparents.

Unfortunately, along with Italy’s many admirable traits, we have also successfully exported abroad our way to lead a criminal life.

Gambling with a roundup of absolute stars

Obviously, you can’t gamble like in Las Vegas with a film like Casino, so Martin Scorsese plays it safe by choosing the best possible cast.

As the narrator and main protagonist of the story, Robert De Niro gives one of his best performances ever.

In comparison to other over-the-top roles, the actor plays a calmer, tighter character who never personally resorts to violence.

His main quality is the intelligence with which he foresees the enemy’s moves, always winning with patience.

Unfortunately, he will also later succumb to the general madness and ruin everything.

The gunman of the band is Joe Pesci, a ruthless and psychopathic criminal constantly willing to engage in fighting.

He starts out as a simple thug, later trying to dominate everything and everyone in the casinos of Las Vegas.

Initially necessary to take control of the city, it then became the beginning of the overall downfall.

The bewitching Sharon Stone, queen of gambling that divides and conquers for the thirst for money, between the two criminal friends.

She makes anyone fall in love with her at first sight, seeming to be a woman entirely in control of her life and her destiny.

However, she has a weakness, too, with a man she craves to help, although he’s a slimy, unscrupulous pimp.

James Woods plays this coward and evil man, with a great interpretation even in a small supporting role like this.

In conclusion, Casino is one of the cinema Bible’s essential pages, absolutely unmissable and unforgettable.

Therefore, the actual crime would be not to have seen it at least once in your life.