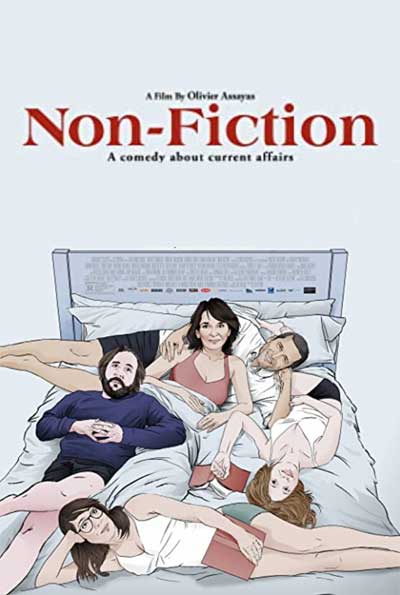 Non-Fiction is a comedy closely following the life of some Parisian couples working in the modern publishing world.

The story begins with the husbands discussing a new book, which is the author and the publisher.

Their publishing house, once famous throughout France, is now going through a wrong financial moment.

Most of their writers, bound to the old publishing system, cannot keep up with day’s modern internet world.

In this new world, stories and novels are now almost entirely on the digital marketplace.

However, the novel they discuss seems promising, combining good fiction with a measure of gossip to appeal to the audience.

Unbelievably, the publisher categorically refuses to publish it, and the writer can not accept the decision, even threatening to quit.

Then, there is a growing detachment between the two Parisian couples, whose relationship becomes increasingly cold and distant.

Until the publisher’s wife realizes the real reason for the rejection, getting angry but also shameful about her infidelity.

Within this new book’s pages, sexual details look pretty similar to her relationship with the writer long ago.

Fearing her husband understood everything, she, therefore, begins to worry that besides her job, she may lose her family forever.

Nothing really ever ends, yet everything always changes

Non-Fiction is a bitter, funny, and intelligent reflection on the digital evolution of reading and writing.

The two Parisian couples featured are both intellectual, creative, and cultured men and women.

But that doesn’t stop them from behaving childishly and impulsively, often acting like stupid, jealous kids.

In the same way, the new writers and editors cannot accept the change in modern publishing from paper to digital.

No one is saying that one thing is better or worse than the other because that would be presumptuous.

Ultimately, we all have to grow up and accept the reality of the situation, whether we like it or not.

Technology is constantly advancing, from the Stone Age to metal or from beasts of burden to motor vehicles.

In the internet world, the reality today is that many bloggers and content creators earn immensely more than most writers.

So it’s up to us to choose our options for our destiny and happiness.

We can mourn over a past that will never return or embrace and adapt our work to new media.

The dialogue in this film is neutral, exposing only the hard truth and then letting us decide.

We find the nostalgia and poetry of these characters no longer young but not so old, still searching for something.

In conclusion, the plot interweaves human experiences around every generation’s common love, understanding, and money problems.

An eclectic filmmaker with a clean and elegant style

Olivier Assayas has been a director around for over thirty years, but only recently has he won the attention of international audiences with the brilliant Personal Shopper.

I loved immensely the movie, exposing Kristen Stewart‘s natural talent and finally stripping her teen actress fame away after the Twilight saga.

Although there are severe and sometimes even dramatic themes, the movie constantly keeps a light comedy tone within everyday life scenes.

The director mixes private and personal relationships in the manner of the best Woody Allen, even though maintaining a European style.

Opening the events are the two friends, of whom Guillaume Canet is the more serious and professional in the role of publisher.

He is a man who fails in his duties when jealousy threatens the welfare of his publishing house, risking ruining everything.

Vincent Macaigne instead plays the writer who experiences the refusal, initially surprised and angry at his friend.

The man is a lazy, lying traitor to his friend and his wife, yet he is perhaps the most honest and consistent character in the whole story.

Indeed, every secret affair must also have a cheating woman, and this time it is Juliette Binoche‘s turn.

The actress is older but still beautiful, playing herself a well-known actress for a french crime TV series.

Finally, there’s Nora Hamzawi, wife unaware of the whole situation, while living on her naive but optimistic selflessness political commitment.

To sum up, Non-Fiction is a tale where there are no absolute good or bad guys, just good and bad moments for each character.

A European comedy that may open your eyes to a faraway reality, which I recommend to fans of intelligent and tight writing.