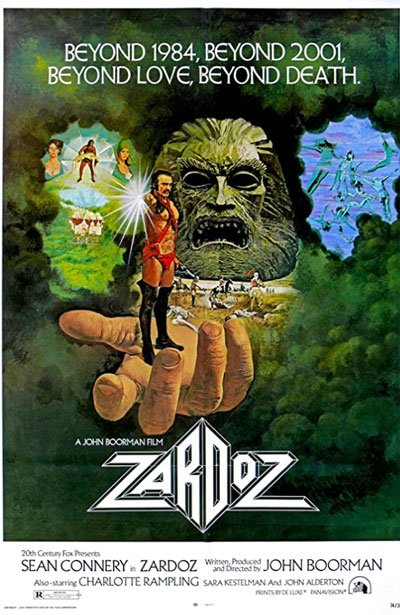 Zardoz was one of the finest 70’s Sci-Fi movies, starring the late old and great Sean Connery.

The story happens a long time after a mysterious catastrophe, which changes the face of our planet forever.

In this new world, humanity comprises only two social classes, living in a rigidly separate way.

Ordinary citizens live, fed and safe, inside communities that are apparently happy and efficient.

Outside, instead, there are the hunters, exterminating hordes of barbarians every day and taking care of the harvest.

They hope that their work will be rewarded with access to the community, where they will finally live in luxury and affluence.

A mysterious idol named Zardoz, whom they worship as a god, is their only contact with that world.

However, one of the hunters succeeds in reaching the safe nest where the citizens of privilege reside.

That’s when he discovers that even the lives of these citizens are not the paradise they seemed.

Indeed, their community no longer feels human sensations and emotions, slave to logic and restrictive rules of society.

His quest for the truth will run together with destroying these men’s deep beliefs, starting a revolution with no return.

A fake world of beauty and deception

The first time I saw Zardoz, I was very young and therefore did not comprehend this Sci-Fi movie in full immediately.

However, I remember being fascinated at first sight by the post-apocalyptic fantasy atmosphere.

Besides, of course, I immediately liked the rebel protagonist with the face of the old Sean Connery.

It’s no accident that I recommended this a year ago, at the tragic news of the great Scottish actor’s death.

Initially, this character seems the typical savage who accidentally falls into a world of elegance and culture.

However, as the story progresses, we discover the truth along with him, and everything changes.

Then the privilege of culture and elegance becomes just another hypocritical lie that hides their prison.

They are equally slaves like the hunters, even worse since they never even concede to die in their immortality.

Only at the end do we understand how technological advancement, which humanity longs for, becomes their everlasting ruin.

As I said, the movie’s guise is a fantasy of yesteryear, in which the protagonists fight through their mind’s power.

But once that power becomes too great, the knowledge twists against them in an inhuman grip without compassion.

The brilliant cinema by an unconventional author

John Boorman is a director working since the late ’60s, still able to surprise and amaze today.

Indeed, his filmography includes terrific movies that differ significantly in genre and style, from Sci-Fi to fantasy and dramas.

These include movies such as the famous Deliverance and Excalibur, to name just two of my favorites.

More recently, there is the intriguing The Tailor of Panama, a story of deception in the shadow of revolution.

In Zardoz, the main topic is the revolution, changing social status, which always seems immutable before the collapse.

The old world begins to creak when the subversive Sean Connery arrives in his mini warrior costume.

Indeed, just his presence ethically, morally, and sexually shocks the behavior of a group that once believed it was sticking together.

One of his greatest enemies is Charlotte Rampling, an honorable wise-cracking council member who immediately hates him.

The sensual and impressive actress plays an ambiguous and outstanding role, shut in her mindset without concessions for anyone.

But the new wonderful feelings that everyone starts to feel will affect her more than anyone else by upsetting her way of thinking.

To sum up, Zardoz is a timeless Sci-Fi movie that everyone should like, because of the arguments and imagination of which it is complete.

Like our world, the absolute political control arising from myth, such as the deity’s exact name, is cruel deception towards men.

Beyond The Black Rainbow – The...