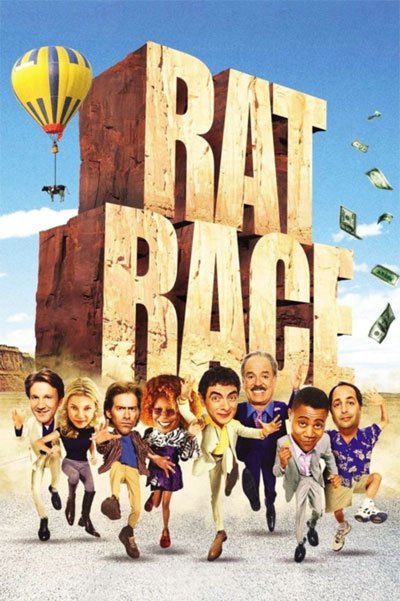 It’s eight people that never before have met that a foolish billionaire casino owner rounds up for a lifetime opportunity.

Traveling from Las Vegas to Silver City, New Mexico, they have no ethical or moral obligation to others.

What matters is their goal to finish first by any means possible to win a two million dollar prize.

The group is incredibly heterogeneous, but they quickly prove resourceful and badass to eliminate the competition.

However, they don’t know their adventure is all about a game the billionaire has set up for his client.

As a matter of fact, in the casino, there is an underground betting circle for a few but rich players.

These wild gamblers are willing to do anything to experience the thrill of betting on the real lives of others.

This game’s contestants do not disappoint them, causing one disaster after another in the craziest ways to win the race.

Along the way, these men and women steal cars, helicopters without any remorse, fleeing from rivals and police.

They even paralyze an airport to slow down their enemies by destroying its communication systems with a jeep.

Arriving at the end of this very long journey, fortunately, something changes in their consciousness.

With no more enemies to fight, even they realize that maybe the money isn’t worth all this chaos after all.

Yet before the conclusion, there will be endless laughter for everyone in the most incredible and unexpected manners.

A 570-mile crazy run track without any rules

Jerry Zucker kickstarts a new millennium with a raging comedy about American ( and beyond) obsession with money and competition.

Rat Race is a movie that brings back the craziness of his early work with his brothers David such as Top Secret, Police Squad, and Airplane.

Some running gags are as irresistible, hilarious, and absurd as the old cartoons with Wile E. Coyote and Road Runner.

The director builds a world in which characters are rubber-made, enduring any extreme comic invention makes us laugh.

Those demented scenes follow one after another without interruption, giving the viewer no respite until the end.

Despite being an entertainment movie, Zucker slips in some hilarious little attacks on American society.

The most evident is the petty billionaires club at the casino, ready to bet on almost anything at any moment.

Any opportunity to bet on some bucks is valid from the taste of pie to a hooker’s pay for crazy requests.

The director makes fun of some of the most horrible people in this world as children, almost more stupid than bad.

The most significant criticism is America, where supposedly everyone has a chance, as the crazy competitors in this long run.

These men and women take unreasonable risks, some even traveling with their children.

Something they never even thought possible before, racing toward the mirage of $2 million.

To sum up, this movie is a long, endless journey, where after every mile, a gag and a laugh are waiting for you.

An exceptional cast on the starting line

In comparison to other movie genres, one of the fundamental elements in a comedy is the cast.

That’s one of Rat Race‘s strengths, featuring a team of actors and actresses who are in great shape.

Leading the crew is the infallible John Cleese as the dollar maniac who owns the casino.

The former Monty Python member is the best, despite having relatively more minor time on the scene than everyone else.

Equally good is Rowan Atkinson, an actor who is perhaps a bit lost today.

However, he was great, as a mad Englishman drove to win but held back by his narcolepsy problem.

The famous Comedian from the UK TV series Mr. Bean acts slightly differently, relying on everything in his hilarious body and facial expressions.

Everyone else’s group characters include equally between internationally known actors, such as Whoopi Goldberg and Cuba Gooding Jr.

Especially the latter, usually used to more dramatic roles, here is a hapless referee hated by all of America.

Rat Race is a commercially successful movie, but not so much to allow the director to pursue his career.

Still, we can remember it affectionately, re-watching it today since it is as compelling and entertaining as twenty years ago.