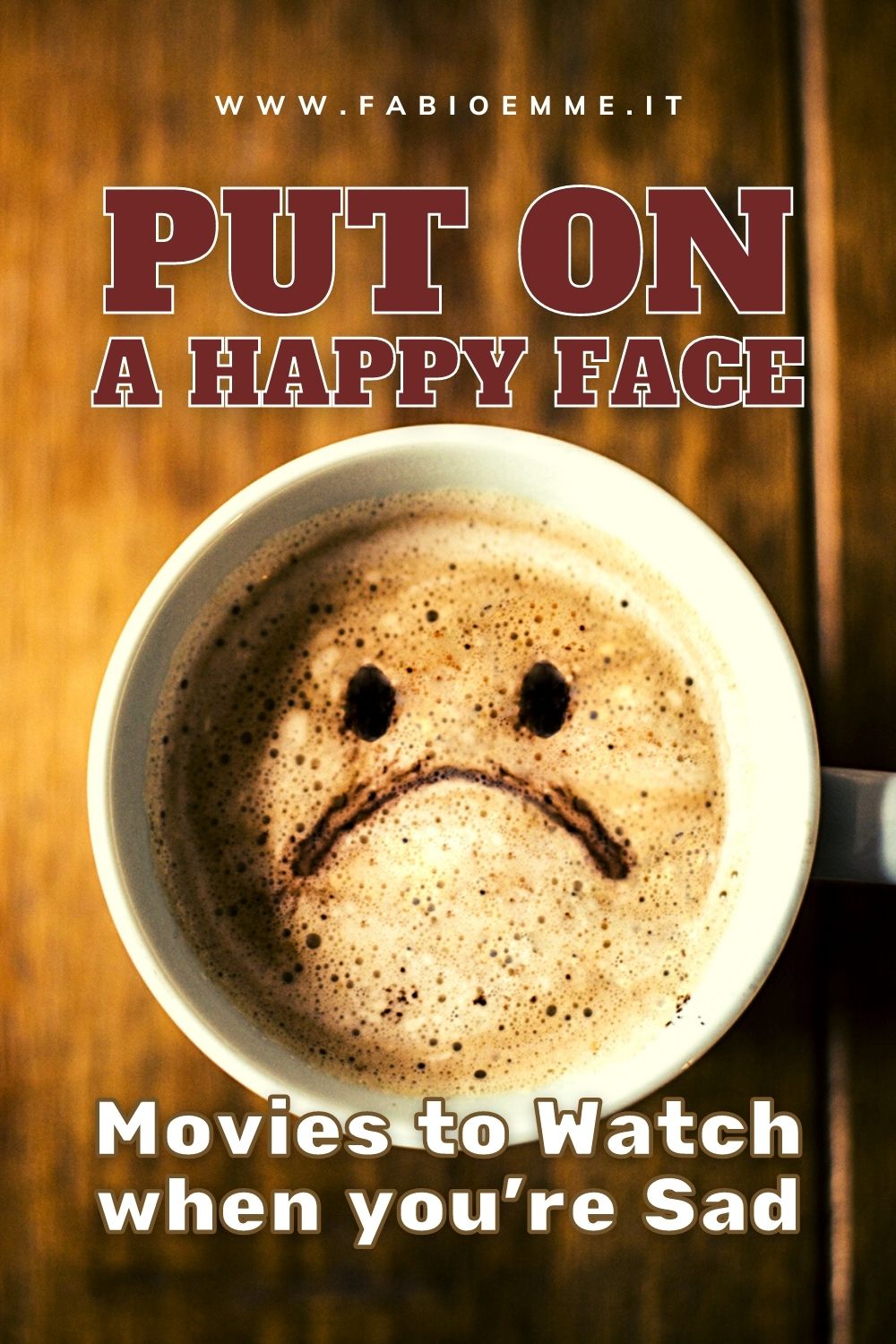 Sometimes we need a few movies to watch which help us put on a happy face when we feel sad and lonely.

We all have those moments when the joy of life is missing and our days crush us to the ground.

Obviously, there is nothing to feel ashamed of since nobody can be happy seven whole days a week.

Especially in these times of global pandemics, social and economic crises, it seems there is no peace for anyone.

Perhaps there is no pill to swallow to fix our problems, but there are always some remedies to cheer up.

One of my suggestions at all times is enjoying a well-made movie, either alone or together with friends and family.

For at least a couple of hours, let’s detach from the unpleasant reality we are currently in.

These precious moments will heal your mind, spreading a sweet mood in the air and reconciling us with the world.

So cutting to the chase, what should we expect to see on today’s cinematic menu?

Let’s start with a romantic comedy taking place in the chaotic London streets and the quiet French countryside.

Following that, we travel to the Canadian-U.S. border, where a lively bunch of cops is on border road patrol.

Finally, we step into an ordinary middle-class American family where two men compete for the love of their children.

Knowing the movies you are about to watch, silence the sad thoughts letting a flash of joy put on you a happy face.

He has lived in London throughout his life, only caring about his career, always aiming for more money and prestige.

The women desire him, and colleagues hate and admire him, but he has no respect for anyone or anything.

Until one day, a lawyer notifies him that his uncle, the only living relative he had, is recently dead.

Since he was a remarkably wealthy man, he has left him an inheritance of a domain in the French countryside.

He hadn’t thought about that place in years, able to put on him a happy face during the hard times of his childhood.

A time where he was still innocent and hopeful while his parents were ending their marriage one argument after another.

Taking some days away from his career, he flew to France to sell the property for the highest possible price.

When he arrives at the site, however, he realizes that the house is in a state of neglect and decay.

Furthermore, what was once his uncle’s well-known vineyard, is now yielding a dreadful quality of the wine.

An unexpected glitch in his plans since her possible cousin might impede him from selling his inheritance.

He, therefore, decides to stay further for a while to work things out before going back to London permanently.

However, something begins to change, sitting quietly without rushing to do business as usual.

After a long time in his life, he starts to look around the world from an entirely new perspective.

Finally, he meets a beautiful restaurant owner, and his heart again begins to beat faster with forgotten emotions.

A French kiss is the ultimate remedy against every disease

A Good Year is one of Ridley Scott‘s lesser-known works, in comparison with successful movies as Alien or Blade Runner.

Obviously, we’re not talking about one of his best or most original works, but I love its simplicity at heart.

Therefore, I consider it an excellent romantic comedy able to put on a happy face on anyone.

Russell Crowe is a likable and funny protagonist, playing a cynical city broker with a sudden existential turn.

He’s pretty different from the tough heroes like Gladiator, inside a remarkable relaxing feel-good tale like a vacation.

Now an international star, the actress plays a woman with a crazy and blunt attitude but equally charming and irresistible.

The charismatic Albert Finney rounds out the cast as a wise-cracking uncle constantly appearing in the protagonist’s flashbacks.

With his jokes and advice, his character unites the two lovers from the beginning without their awareness or memory.

I personally love the characters in this movie, perfect company when I happen to be feeling sad.

They are men and women who are full of the joy of life, despite their sometimes arrogant and unbearable natures.

Thus, for anyone looking for a temporary break from reality, this is the ideal world in which to escape and movies to watch when sad.

From the distant French love affairs, we now turn to the daily lives of some Vermont state police officers.

Their job is not the most exciting, mostly controlling traffic and speed limits on the highway.

So they do their best to overcome this boredom day after day with pranks and childish games.

Unfortunately, fate is waiting for them as the region’s budget cuts potentially close their station for good.

Having become familiar with losing their jobs, they try to keep their morale up until the last moment.

Until one day they inspect a trailer parked along the highway, finding the body of a young girl.

Initially, the local police try to obstruct them, even coming to a fistfight to get jurisdiction of the case.

Still, that doesn’t stop them from continuing the investigation, since they believe there’s more going on underneath.

After a truck full of drugs is seized, they suspect the murder relates to a contraband trade across the border.

Attempt to gather enough evidence before the governor’s official visit, which is awaiting the whole town.

Their plan is to show up at City Hall solving the case, making a good impression, and saving their jobs.

Yet the local police harass them to stay the only local law enforcers, putting them out of business for good.

So they have no choice but to move in the shadows, quietly solving the case before it’s too late.

To Protect and Serve… and have fun

Super Troopers is one of those comedies to watch on rainy days, whenever we’re lonely and sad in our misery.

It’s a chance to put on a happy face with an insane friends group amidst college pranks and hilarious gags.

Indeed, the film was initially the pilot for a television series, which ultimately the production never made.

The director also plays a cop, swinger who invites guests for a double date with his sweet wife.

The rest of the actors in the cast are also funny, united in the popular group Broken Lizard.

They are a community of comedians and friends who always work together, then raise enough money online for a sequel.

As usual, Brian Cox‘s performance rises above all the other, albeit likable and honest actors.

The old great actor plays the stern captain of the wicked police precinct close to being fired.

I fondly remember him as the first Hannibal Lecter in film history, whom Anthony Hopkins took over in subsequent movies.

Anyway, he ironically opens to the madness story’s atmosphere, revealing an unsuspected and irresistible sense of humor.

In conclusion, this is one of the funniest recent American comedies with a low-budget production that successfully hits the mark.

Most of all, I recommend this movie to those who have trouble with their jobs, like the funnier protagonist cops, to watch and feel less sad.

One married couple starts from scratch after the woman’s divorce, having custody of the children from the previous marriage.

The husband is an honest, shy worker who daily tries to earn the children’s trust with tenderness and affection.

Their lives go through ups and downs safely in their beautiful home, but slowly begin to function as a family.

Suddenly the stormy ex-husband returns, always like the same charming and swaggering rebel getting into trouble.

Initially, his presence appears just momentary; however, everything changes when he takes a job in the new husband’s company.

Despite he tries to put on a happy face, his anger toward what he considers a man who sits in his place is evident.

Just as evident is his intention to take back the love of his former children and his woman.

Therefore, between them begins a relentless struggle to overcome and look better than the other at any cost and circumstance.

Soon the situation gets heavy, and the atmosphere in the house becomes unbearable, reaching even to endanger the children.

So it becomes clear for everyone’s sake one of them will have to leave, giving up family forever.

The shy employee must discover a strength he thought possible, just as the rebel must control his wild attitude.

What you wouldn’t do for family

Daddy’s Home is another excellent movie starring Will Ferrell, a performer you can always rely on to watch when sad.

Whether as the lead in Anchorman or a supporting character in Zoolander, his performances are always awesome.

It’s hard to succeed in the clever way he does in appearing idiotic, avoiding grimaces or trivial and vulgar skits.

His child-like behavior is always fun, feeling as playing with a friend is always there in our time of need.

His unstoppable opponent is Mark Wahlberg, the tough, muscular alpha male who wants his puppies back.

Indeed, the actor is generally more familiar with action movie roles such as Four Brothers or The Italian Job.

They are always funny movies but triter, where he’s always the smiling badass ready to fight without a second thought.

Sometimes, however, does not disdain comedies such as Ted with the irreverent Seth MacFarlane.

Together with the author of the not very politically correct Family Guy put on a happy face in delirious movies.

Bringing together these diverse characters but with the same goal, the movie elicits laughs from every confrontation they have.

These two men are willing to do, tragicomically, anything for their family.

Willing to even, when they come to their senses, go away and suffer the pain of losing them, as long as they are happy.

I don’t have much to say regarding the director Sean Anders, except that he cleverly stands apart and leaves the scene unlocked for his protagonists.

In conclusion, it’s a great uplifting movie to watch when you’re sad, with a comedy plot that never goes down in tone.