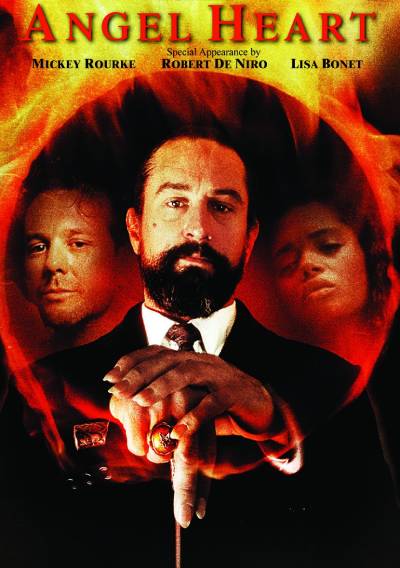 I was almost ten years old when I first saw Angel Heart, one of the cruelest stories about making a deal with the Devil.

For me, it became an instant classic, a movie to compare with others in the supernatural genre that I would see in the future.

The story is about a lawyer contacting a private detective to find a person who has been missing for years.

He works for a strange, elegant and refined individual, halfway between a wealthy entrepreneur and a religious guru.

The detective immediately accepts the job, which will be well paid, but quickly realizes that the case is not as simple as he thought.

The man he must look for indeed escaped from the hospital where he resided over ten years as a victim of a grenade explosion in Vietnam.

Because of the accident, he lost his memory, and his face is now completely different after a deep facial surgery.

The search begins with few clues, knowing not what he looks like and considering he doesn’t even remember who he was.

He only knows that the man was once a successful singer and came from Louisiana. And just there, he had presumably returned after his escape.

Therefore, the detective trips to the south to meet his musician friends and a fortune teller, the daughter of a wealthy family with whom he was having an affair.

However, the people he interrogates begin to die in the most horrible ways, one after another, like someone was on his tail.

At that point, he understands he doesn’t have a chance anymore, having to find this man before he becomes the last victim.

There’s always a price to pay, although we can’t remember why

Angel Heart was one of the rare instances I saw the movie before reading the homonymous book, appreciating them equally.

The story starts as a fantastic noir detective story, with the usual stereotypical characters of the genre.

So we have the cynical and charming detective, drawn into an inextricable mystery by a client whose intentions are ambiguous.

The plot is rich with love for old masterpieces from the 30s and 40s, such as the legendary movies with Humphrey Bogart.

But the supernatural twist is not long in coming, in the form of an invisible, murderous demonic presence.

The world of 1950’s America, both in the city and in the far south, is a perfect ground where the story takes place.

Those times’ racist and ignorant reality perfectly merges in the middle of the period’s great blues and jazz music.

The result is a movie challenging for our days, an intriguing noir inside a thick fog of black magic.

It is an exceptional horror thriller with the most challenging lesson about escaping after making a deal with the Devil.

Two myths of the 80s face to face

The excellent Alan Parker directs (before and after) prosperous movies such as Midnight Express, Fame, and Mississippi Burning.

As already said, the historical costumes and environments are impeccable, carrying us back to the world that once was.

Each scene imprints in our memories to stay there forever, with a pessimistic and romantic style at the same time.

Above all, however, this movie will become somewhat mythological because of the great actors in the lead roles.

But the actor is handsome and has enormous talent, as he will confirm in the years to come.

He exploits a talent to the last drop, sublimely interpreting the suffering and uncertain torment of his character.

Together and against him is a cinema myth like Robert De Niro. He plays the diabolical Louis Cyphre, whose name I think is self-explanatory.

To be honest, throughout the movie, we see him maybe ten minutes in total. But believe me: it’s enough to make you forget any intention of making a deal with the Devil.

Also, let’s not forget the female side of this story. It features two beautiful and capable actresses like Charlotte Rampling and Lisa Bonet.

These are two sexy and very different women, perfectly complementing the evil plot of tragedies leading to the inevitable ending.

In conclusion, I recommend Angel Heart to just about anyone, man or woman, young or old.

Whoever you are and wherever you live, I’m sure you will instantly love it as madly as I did.