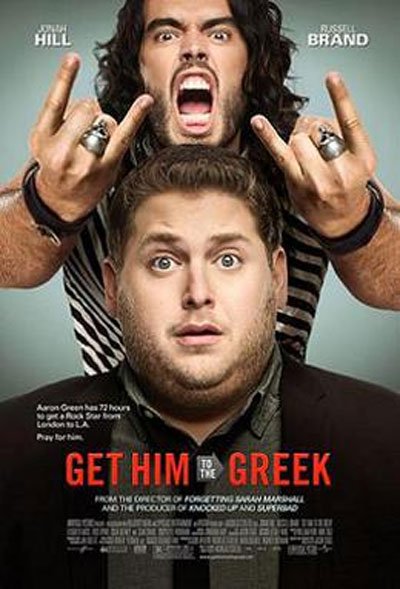 Get Him to the Greek is a 2010 on-the-road comedy that makes fun of the contemporary wild world of rock and pop music.

A once very successful record studio is in severe financial crisis, facing final bankruptcy and general dismissal of all employees.

Record sales are dramatic, and for years they have failed to discover a singer to turn into an international star.

While having an emergency meeting, a younger talent scout has an idea to give the company a bit of a break.

He plans to stage a vast old-school concert in Los Angeles, relying on the nostalgia effect to attract a crowd.

As the evening’s main attraction, he suggests inviting a glorious rock star who has begun a slow decline in recent years.

The scout travels to England to pick him up and accompany him to America as soon as possible.

Unfortunately for the guy, this trip will be interminable because the man is an incurable junkie getting in trouble at every opportunity.

However, knowing him closely, day after day, he starts to uncover his hidden side behind the superstar’s ever-smiling facade.

Indeed, after his latest tour and a new disastrous album, the wife has dumped him and taken away his child.

By the end of the trip, the scout learns that perhaps it’s better to care for his fiancée instead of focusing only on his work.

A life at the rhythm of music

Every year many films are released about the world of music, singing, and dancing, but few manage to leave a mark.

Get Him to the Greek may not be the 2010 outstanding gamechanger, let’s be clear.

Personally, however, I found it very sincere, open, and remember it from time to time to this day.

Since everything happens in the musical world, several stars cameos such as Pink and Christina Aguilera.

They all playing with humor in their parts, adding that bit of realism to the general madness.

Indeed, if we can go beyond the stupidity of the various characters, we can find something unexpected in every scene.

Amid the parties and fun, deep down, these characters also care about the future and well-being of their family.

First of all, sex for once has no shame and fear; instead, it is always with amusement and spontaneity.

For example, as soon the scout knows the famous singer, minutes later he’s already having sex with a hot fangirl.

Not to mention the constant need to be outside reality, through drugs and his nonsense arguments.

Arguments which, have an underlying logic, a broader sense of meaning many of us no longer see after our youth.

The hidden meaning that I like to see, perhaps, being truly free needs a little crazyness once in a while.

The decaying myth of rock stars

We can tell right off the bat; this comedy wholly bases its success on the skill of its leads.

Don’t get me wrong, the pairing of the out-of-control lunatic with the serious, responsible man is nothing new.

For example, we can cite Lethal Weapon with Mel Gibson and Danny Glover, though, of course, it’s an action movie.

Another important character is the singer’s wife, with the beautiful Rose Byrne playing the role.

The actress plays a stupid but also innocent woman who really can’t understand people’s resentment against her husband.

Although it’s a brief moment in the whole story, she impressed me because of the intimacy of this family scene.

Nicholas Stoller writes and directs with speed and confidence while balancing the journey’s steps with the right rhythm.

Wisely he doesn’t stopping in unnecessary turns of phrase to show what he wants to put across.

Sometimes the comicality is perhaps a bit vulgar, without ever reaching the excess of becoming annoying or stupid.

Not to mention, then, the excellent assortment of songs that make up the soundtrack, such as music by the same Russell Brand, singer in real life.

In conclusion, we can therefore consider Get Him to the Greek also as a family comedy, maybe the best of 2010.

But even though it had great success with audiences and box office receipts, today, there is not much talk about it despite still having its value.

So let’s rediscover it all together, watching it with our friends and family for an evening of crazy and rowdy entertainment.