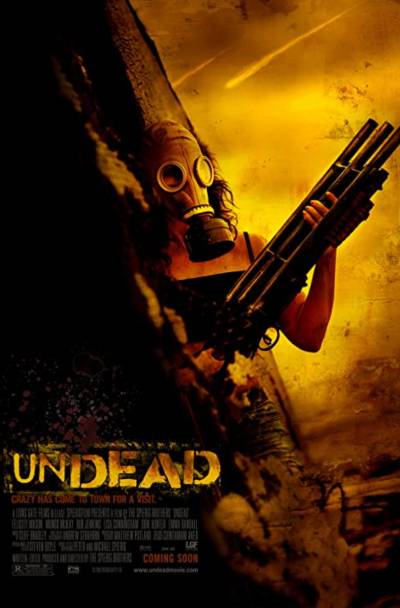 Undead is a small Australian horror production, as entertaining as it is unluck in its international distribution.

The day begins like any other in this small rural town, with people trying to carry on their quiet little lives.

A young girl is going to the hospital to give birth, accompanied by her mother and brother.

The silly and grumpy local sheriff goes out on his usual round of daily business with a recruit.

Finally, the young beauty and local queen decides to leave town after the bank forecloses on the rest of the family farm.

But suddenly, the sky darkens, and a multitude of fiery meteors fall to earth.

In addition to devastating half the town, the people hit by meteors rise to their turning in bloodthirsty zombies.

All of these people must flee in a hurry to avoid the carnage, sheltering in the mansion of a hunky local farmer.

The man is highly silent and reclusive but is exceptionally able to defend himself effectively.

Trying to resist by barracking, they soon realize that they must escape from that hellish place.

When they arrive at the valley edge, however, they discover to their horror that there is an impassable wall around the region.

At that point, their only option is to continue fighting, hoping that the siege of the Undead will end as soon as possible.

Few money but so much passion for cinema

Those guys who attempt to create movies with low money always have all my respect, so I feel happy when some succeed.

We must consider how much personal time and energy they put into making something compared to the big majors.

Undead is the perfect example of such cinema, unluck even under the independent productions budget we watch at Sundance festival.

However, don’t be fooled by the money, although the low budget shows a high quality of staging and direction.

Indeed, we might say it is even above the hordes of zombie movies and TV series.

With all its flaws and non-sense, at least it isn’t too damn serious.

Lightness is an essential characteristic which too many actions and horror movies today seem to have forgotten.

Too many directors today do their best to look serious and dramatic, only ending up being unwillingly comical.

We can mention Lethal Weapon, Die Hard, or Evil Dead as my favorite examples of action and horror movies.

Being iconic masterpieces from the 80s and 90s, they always are along the edge of irony and laughter.

The action scenes are many even here, and the splatter is bloody without ever becoming heavy or violent.

A healthy laugh reminds us constantly that we are watching only a movie to entertain and amuse us.

However, being a good entertainment product does not necessarily mean being stupid or useless.

On the contrary, we appreciate even more the intelligence of the directors to create every second of this little horror movie.

Michael and Peter Spierig make their filmmaker debut with great originality and humor.

I speak about originality because, although within the overcrowded zombie genre, they have ideas quite interesting.

By exaggerating the characters, they make a movie freshly and enjoyably.

Mungo McKay plays the most intriguing role, a lethal and silent gunfighter farmer.

His appearance with three rifles put together in a single weapon is hilarious, as are all the dialogues with the obtuse sheriff.

Indeed, Dirk Hunter is his greatest antagonist, perhaps even more than the ravenous zombies.

He’s a law enforcer acting like a badass but actually a stupid coward, comically believing himself to be in charge.

Finally, let’s talk about the main protagonist, Felicity Mason, once a Beauty Queen but now a woman amid an existential crisis.

Initially, she seems just one of many victims, confused and unhappy, who needs the protection of men.

But when the going gets tough, she has to fight and proves she knows how to cut up the hated zombies.

To sum up, Undead is an excellent unluck show which deserves more exposure to the general public.

However, the Spierig brothers have attracted the attention of significant productions, eventually going on to direct Predestination in 2014.

One of the finest science fiction and time travel films I had already suggested to you in another post.

Hoping, therefore, they continue on the road so far, let’s enjoy together with their first movie ever.

The Colony – Humanity restarts from zero after rising waters