The Colony – Humanity restarts from zero after rising waters 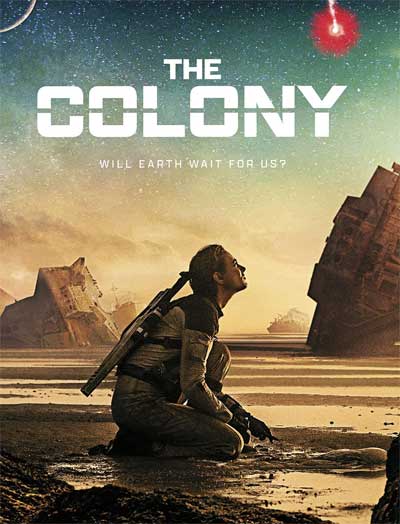 The Colony is a film set in the distant future after rising waters have flooded the entire planet earth.

For survival, the whole of humanity settles on a distant planet, where they hardly survive only inside artificial domes.

However, as the years go by, females have enormous fertility problems, and soon the birth of new children drops to zero.

After that, the survivors embark on a series of exploratory trips, returning to Earth to check if conditions have improved.

Unfortunately, after some encouraging messages about the atmosphere and the fauna, the first expedition of veteran astronauts becomes silent.

Already desperate, the remaining humans on the distant planet send a second team to complete the explorative assignment.

Among the young crew of this spaceship is the daughter of the brilliant leader of the lost astronauts.

The girl hopes her colony returns back home, as well as, of course, to know what happened to her father.

Shortly after they land, an angry mob of strangers besieges their spaceship, capturing and imprisoning them.

So they discover, in the worst possible way, that, after all, the human race still exists, albeit in a primitive and violent form.

Being the least alive of the group, she has to travel this world of fog and rising water, searching for the truth.

Anyone still doubt about global warming?

The Colony is not a film for those who deny global warming at every turn, considering the sci-fi premise.

It’s no secret that the continuous increase in temperature causes the separation of large blocks of ice from the poles.

These huge icebergs then travel along the oceans, melting along the way and rising Earth’sth’s water mass.

In this scenario, the few survivors cannot rely on anything from our species’ past, technology, or culture.

Indeed, most of them were born after the disaster and never saw the big cities, now unreachable under miles of water.

In addition, twice a day, they must endure flooding and an impenetrable fog wall that suddenly descends, covering up everything.

On the other edge of the universe, the people who could escape into space also live in conditions of extreme adversity.

Their new planet is a rocks cluster where nothing grows, and it is impossible to even walk without a respirator.

As we have already said, the total female sterility finally arrives to plant one last nail on the coffin of their future.

Therefore, almost without realizing it, the young protagonist has the destiny of our entire species in her hands.

Finally, besides the environmental conditions, the girl will also have to face the selfishness and greed of men.

A world born again from women

Most of the locations are ample spaces almost entirely underwater, from which only a few ruins of the old world emerge.

The music is intriguing and discreet, with many electronic effects and little melody to emphasize human despair.

Finally, the plot is simple, but it unravels in a few good turns, crossing the destinies of the few characters in an effective way.

Nora Arnezeder is an excellent protagonist, very young but already promising, who has a genuine interpretative intensity in her role.

The young French actress, besides being talented, is unusually attractive, despite her masculine, thin, and athletic manners and appearance.

It is a kind of beauty that I appreciate, somewhat different from her colleagues with their excessive sexy curves.

Going back to her character, we closely follow her discovery of a lost world that can only be reborn from women.

In this world, most men are little tyrants, willing to determine the fate of the survivors’ children.

I approached this movie without any expectations, but I was pleasantly surprised.

The story, characters, and direction are valid, and it doesn’t need much more when the main idea is rather clever.

Therefore I recommend The Colony to the enthusiasts about social sci-fi film, with a lot of heart in its production.

Halloween Movies – How to spend a scary fun night