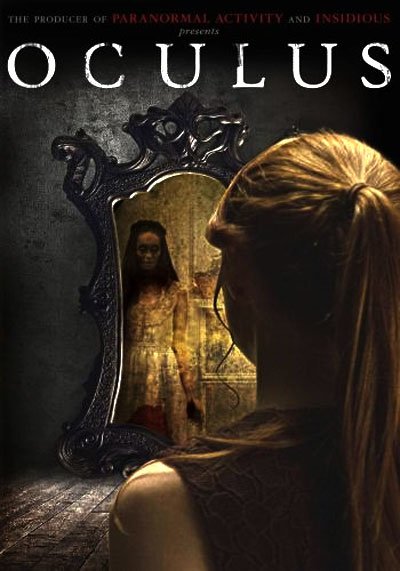 Oculus is the tale of a mirror that seemingly comes straight from hell, carrying evil to the eyes that look into it.

A young girl, who works for an auction house, buys a precious antique mirror.

She immediately takes it home, calling her brother, whom she hasn’t seen in years, and asking him to join her.

She not only intends to see her last living relative again but also to investigate with her own eyes an evil secret.

Indeed, her father had bought the same mirror and then placed it in his workroom in her youth.

From that moment, their lives had changed forever, entering hell with no way out.

Slowly, paranoia and suspicion took over her mother, turning her into an unstable and fearful person.

When her madness reached its peak, even their father had also gone insane.

The man confined his wife in their bedroom, torturing her for days until she died.

Now that they are grown, both have deep scars and trauma from that terrifying experience.

The brother, who witnessed his parents’ evil death before his eyes, joins his sister, ready to hear her intentions.

She discovers many tragedies regarding this mirror’s owner’s history throughout the centuries while doing research.

Eventually, she believes that the object has the power to shape minds at will, making people see things that drive them to madness.

She thus prepares to face the evil forces in her way, hoping that her brother will join the fight.

The power to obscure the mind

Oculus is an original and intriguing horror, where the deception and hostility come from an inanimate object like a mirror.

Indeed, in the movies, we have seen curses of all kinds sharpen anything and people.

A long line of stories never ends well, whether from a car as in Christine or an entire hotel in The Shining.

The horror appears within this small family home walls, which helplessly slips into an even darker abyss.

Precisely as it will be for the kids, later on, none of them can see the truth anymore.

The mirror creates an endless series of cruel hallucinations, misleading and pushing them against each other to commit harm.

The fear we can breathe in every moment, uncertain of what we see, incapable of distinguishing the truth from the object’s manipulations.

The most exciting aspect is the way the girl chooses to fight, which is through science.

Meticulously, she fills her house with monitors and electronic control systems, confident that she can fight the tricks.

However, the demons from the mirror will be far more insidious than she ever imagined, locking her along with the brother into a deadly trap.

In conclusion, Oculus is horror with thriller influences, where imagination is the enemy coming from the worst of our nightmares.

Some days the game works… others, it doesn’t

This movie got a lot of attention from audiences, yet I think it’s very far from the original and very poor as simple horror.

Oculus is a much more effective, direct, and imaginative work, as well as genuinely terrifying in its scary sequences.

All this may be because the director could create anything he wanted, rather than following Stephen King‘s script.

As protagonists for the scenes in the present, he chooses the pair of young actors Karen Gillan and Brenton Thwaites.

Their controversial relationship that comes from distrust works very well, uniting perfectly under the evil eye of the mirror.

Moreover, in this part, the movie genre veers almost too sci-fi with the forensic analysis of the dark emanations.

The object feeds on plant and animal life to initiate its power, then comes to the main plate by devouring people’s souls.

In the various flashbacks, the absolute protagonists are Katee Sackhoff and Rory Cochrane, more adult and mature in their interpretation.

Initially, the married couple lives happily with their children, but the falling of violence and awfulness is inevitable and near.

Oculus is one of the best horror movies from 2013, starring a simple, unmoving mirror that turns out to be an utter monster.

I recommend watching strictly with the lights off and late at night for even more significant results, as the best scary stories deserve.

Halloween Movies – How to spend a scary fun night