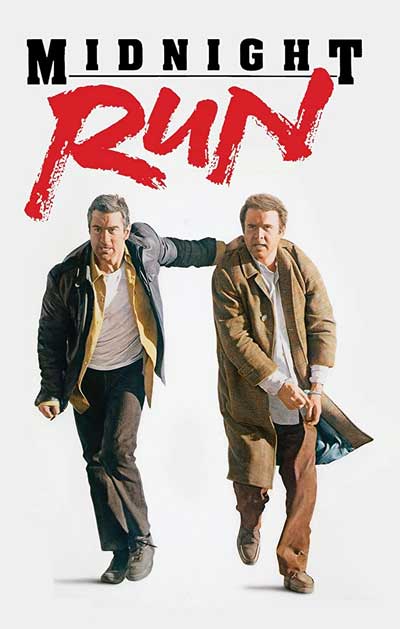 Midnight Run is an 80’s movie with a charming Robert De Niro as an unstoppable and funny bounty hunter.

The man has had enough of that kind of life, although he is exceedingly well at his job.

Therefore, he accepts enthusiastically when a bail bond agent entrusts him with an important assignment involving a considerable reward.

The target is an accountant who has stolen a massive amount of money from a vicious and dangerous mafia gang.

He disappears into thin air just before the trial, and neither the feds nor the police has succeeded in finding him.

The job is hazardous and challenging, as he must deal with criminals and authorities relentlessly pursuing the fugitive.

However, the final paycheck would allow him to retire and start that little restaurant he desires, so he cannot quit.

He locates the accountant fairly quickly using his skills, yet he underestimates his cunning and survival skills.

The man manages to elude him several times, causing the long journey to Los Angeles with incredible difficulty.

As they spend more and more time together, they discover many things in common with each other.

Indeed, the bounty hunter once was a cop fighting against the same mobster after the accountant.

Finally, to get both alive from that impossible predicament, they’ll have to fool everyone else by midnight of the following week.

An on-the-road adventure from NYC to LA

Midnight Run is one of the funniest and least-known movies starring Robert De Niro.

It is pretty strange, considering that it was a great success cashing almost 100 million dollars worldwide.

The story is an entertaining journey of two different characters, discovering a growing relationship between them as time passes.

The action scenes are built for fun, involving different groups in the chase.

Indeed, besides the criminals and the feds, a rival bounty hunter joins the game, constantly attempting to abduct the accountant.

But the real strength of the movie is the relationship between the two characters, initially suspicious and cynical owing to their own bad experiences.

The long journey together settles their differences, especially when they get to know each other’s families.

At this point, all stereotypes about the grumpy mercenary and the kind thief disappear, and we discover the true nature of these men.

In summary, it’s a wild movie of entertainment and chase, actually more profound than it seems at first sight.

A time when Action movies were humorous and smart

Maybe not everyone remembers Martin Brest, but his movies were enormously popular during the 80s and 90s.

As an example, he made Beverly Hills Cop and Scent of a Woman, an American remake of Profumo di donna.

Let’s face it; he probably will not remain in history as his generation’s most significant or most talented auteur.

Nevertheless, his movies were always genuine entertainment; therefore, we must acknowledge his merits without hypocrisy.

The key to the success of Midnight Run indeed lies in the choice of the two main actors, Robert De Niro and Charles Grodin.

At that time, De Niro was coming from a string of memorable movies such as Brazil, The Untouchables, and Angel Heart.

The public adored him unconditionally, so he committed himself to this action-adventure comedy to vary the genre a bit.

But even though it was a simple entertainment product, he did not leave out his meticulous method of acting and approach to his role.

Also, as already mentioned, his character had a more profound background than it may seem at first.

In addition, Charles Grodin is the perfect sidekick to hold up his sense of rhythm and the humor of the script’s many dialogues.

Playing the role, he is an honest man becoming a thief out of necessity, horrified to discover he is working for murderers.

He’s not solid or violent; instead, he relies on his courage and intelligence to trick other people into working for him.

I mean, the classic gentleman thief updated to the modern-day, in today’s world of the mafia and corruption.

It’s been a long time since I watched Midnight Run when I recently saw it on television.

So I took the opportunity to post an old movie I enjoyed in youth, hoping you may appreciate it too.