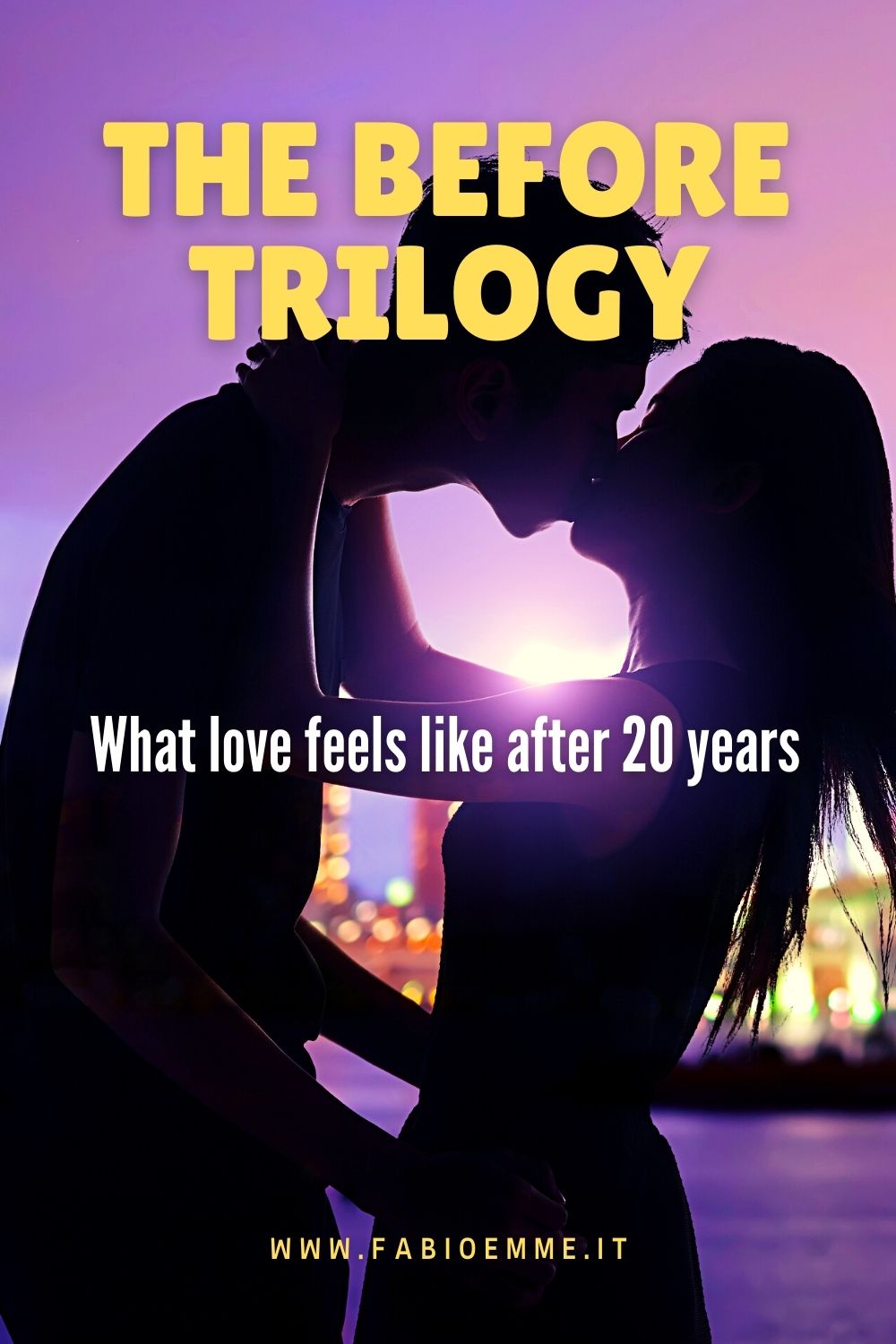 Certain movies could take twenty years how the general public’s love feels like, like the Before Trilogy by Richard Linklater.

A director about whom we can say everything except that he doesn’t dare to experiment when making a film.

Indeed, his career goes from successful comedies like School of Rock to courageous denunciation pieces like Fast Food Nation.

In one way or another, movies are always outside the box and the usual stereotypes from mainstream cinema.

Besides the various genres of fiction he approaches, Linklater likes to try different methods of filming them.

Let’s take the example of Boyhood, in which he describes the growth of an ordinary American family, spending almost 12 years to make it.

Or again, A Scanner Darkly, a science fiction masterpiece from a Philip Dick story, perpetually hovering between reality and technological illusion.

He created a unique atmosphere by overlaying digital animation on top of real actors like Keanu Reeves, Robert Downey Jr., and Winona Ryder.

Today, we are talking about a love affair the director created and developed over almost twenty years.

Three separate films that focus on three memorable days in the lives of two lovers, following them one step and one word after another.

It is a very classy, ironic, and delicate movies saga finally given the name of the Before Trilogy by movie buffs.

If you happen to be among those who have not yet had the luck to experience them, let’s take a closer look to understand what real love feels like.

A French girl travels on a train by herself on her way to Paris to meet a dear friend.

The continuous bickering of a married couple annoys her, so she moves to a different seat in front of a young American.

The young man, recently broken in love, is going to Vienna airport to fly back to the United States.

They immediately like each other as they start chatting about their lives in a friendly and intimate way.

Since he doesn’t want to wait alone at the airport, he proposes to her his companion until dawn.

Thus begins a long night wandering the streets of Vienna, among the great churches, historic buildings, and the city’s colorful nightclubs.

The more they are together, the greater their initial curiosity becomes an increasing mutual attraction.

Loves, at first sight, are something they never feel like, flowing into an uncontrollable passion until morning.

However, their feelings of doubt, unsure about starting a relationship living thousands of miles from each other.

When they finally sadly say goodbye at the station, we neither know what their fate will be.

Does the life train only stop once?

Let’s face it, in a romantic movie; the first essential ingredient is chemistry between both lead actors.

The choice of Julie Delpy and Ethan Hawke works one hundred percent without hesitation in this regard.

Our first impression is the stereotypical French, pretty and sweet girl and the charming American guy with a messy life.

Yet this first perception vanishes the longer they talk, becoming a couple/portrait of an entire generation.

These two simple souls join their love for life and art, sharing their thoughts about the world and people.

Another essential ingredient is the director’s unique vision with directing and screenwriting talent.

It’s a night hand in hand with these lovers as they walk along the banks of the Danube River and breathe in the aromas, history, and music of Vienna.

When the film ends, we are sad to lose two friends we worry about never seeing again.

To sum up, this beginning Before Trilogy is one of the greatest movies about love at first sight, with the simplicity and naturalness of two young innocents.

Nine years after the two lovers’ goodbye, the story resumes with the American becoming a successful writer.

Coming to the end of a long tour throughout Europe, he finds his way to Paris to promote his book.

This book narrates the fleeting and magical encounter with the girl from so long ago, whom he never forgot.

Much to his surprise, he meets her again in the library where the presentation is taking place.

Amiably chatting over a coffee, they discover how time goes by fast with enormous changes for them both.

The boy is married and has a son, while the girl lives with a voluntary worker always away on business.

Again, he has a flight to catch in a few hours to bring him back to America to his family.

Since he doesn’t want to waste another opportunity, he suggests they spend that time together walking around Paris.

She accepts enthusiastically, being familiar with the city and tenderly thinking back to that strange one night of many years before.

Then begins a long afternoon of romance, which could change their miserable lives again remembering what love feels like.

Is it even possible in Paris not to fall in love?

This saga’s second chapter continues the narrative from the incomplete point where it stopped earlier.

The suspense of that love left behind is then turned into years of distance that the two protagonists fill by talking.

Once again, the tight, candid, and amusing dialogues are the essential element of this movie.

However, the screenplay’s cunning tricks us into thinking they are two young people still beautiful and hopeful, apparently happy and satisfied.

Indeed, we realize they have taken two dead ends since their last meeting with their word and glance.

The guy is stuck in a dead-end, loveless marriage, while the girl is bursting with an idealism she can’t seem to realize anymore.

Julie Delpy and Ethan Hawke give even better acting than the previous movie, with more mature and complex characters.

Yet even though they have since grown up, the way they see the world’s beauty is the same as when they were young.

In a few words, Richard Linklater is also winning the second round of his famous Before Trilogy movies.

The result is another story with a charming atmosphere, in the most romantic city on the whole planet.

In the conclusion of this gorgeous Before Trilogy movie, we jump once again nine years after the previous chapter.

Our friends are now a longtime couple with two beautiful little girls, in addition to the son from the boy’s previous marriage.

The family is concluding a wonderful summer vacation in Greece as guests in the beautiful home of a renowned poet.

This period is a time of absolute nature’s peace, far from the city’s chaos and their work commitments’ stress.

They were spending time with a couple of friends and two young lovers, closely recalling how they were many years before.

Unfortunately, the American’s son has difficulty experiencing bad relations with his mother, who has nearly exclusive custody of him.

Becoming increasingly anxious, the French woman fears this breach will finally crack the relationship, ultimately separating her and his partner.

Moreover, she must surrender to the fact her career as an environmentalist is entirely pointless and inconclusive.

While she mulls about working for a government insider, her Greek friends give them a final gift as a farewell.

A final night in a luxury suite, trying to figure out by midnight whether they can save love and family.

Can romance survive the familiar routine?

Just as in the second chapter, the happiness of a small family on holiday initially deceives us.

Again, each dialogue hides an issue that could devastate the lovers, separating them forever.

However, their humanity saves them in the end, burying the battleax behind a smile and the desire to be romantic.

Julie Delpy and Ethan Hawke face what love feels like from a different point of view, twenty years after the first movie.

Together, their passion for each other seems to suffer daily responsibilities for their children and the American’ s marriage aftermath.

Work obligations are keeping them apart, in addition to making them suspicious of the occasional adventure they might both have.

However, Richard Linklater is trying to teach us that in the end, none of this matters.

This is just the reality of life colliding with our most intimate and unmentionable dreams.

Indeed, as he says on this night end, maybe it’s better to have something real than keep dreaming the impossible.

Some advice that we can only accept with love, continuing to fight for our desires as though we were still in our twenties.

I hope with all my heart that you will experience what love feels like with this before trilogy movie as much as I do, assuming you haven’t seen it yet.