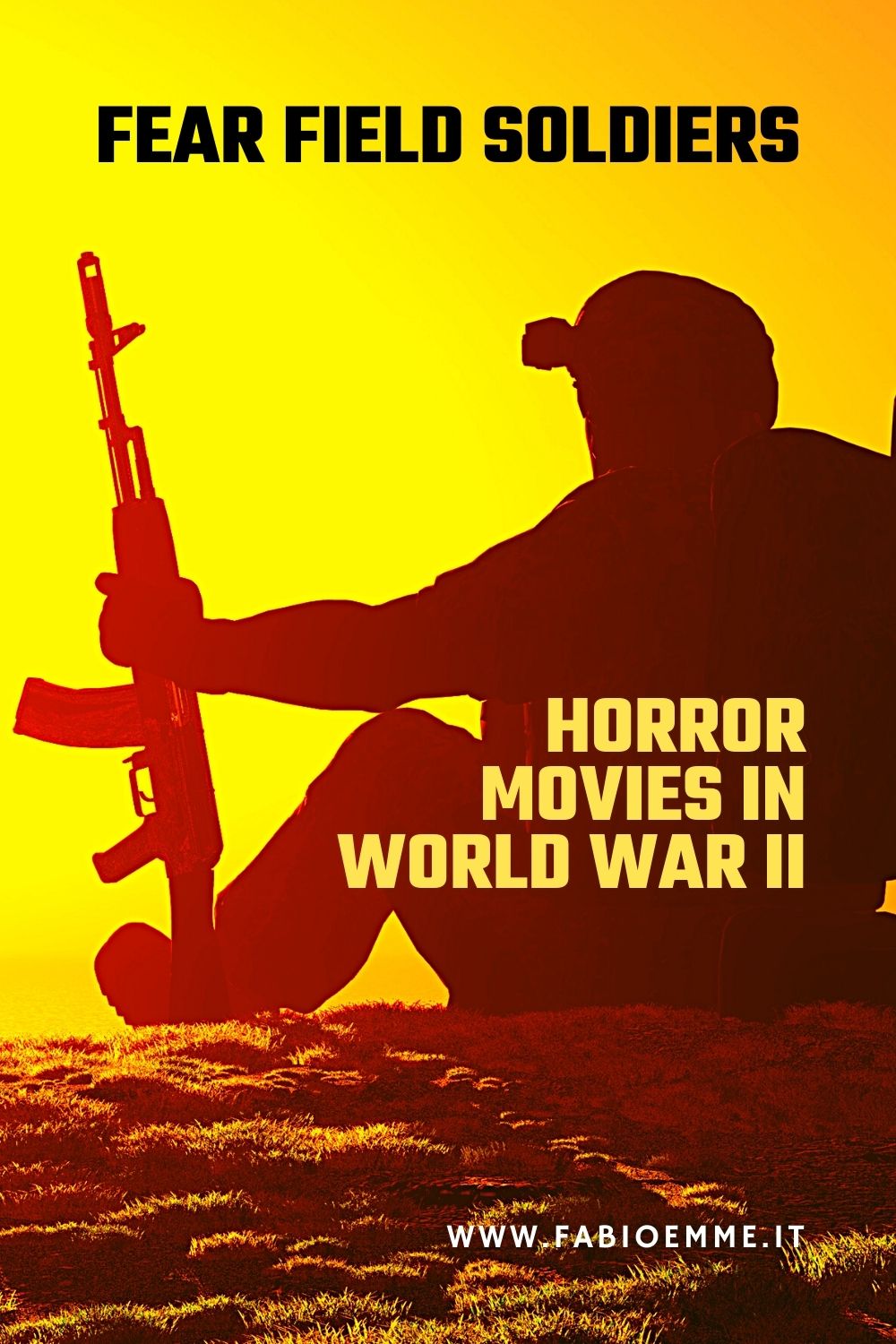 Three movies occurred during World War II when the terrible Nazi threat loomed over Europe and the entire world.

It was one of the darkest periods in human history, during which the insane ideology of mass extermination brought soldiers perpetrating atrocious on the field.

Here the monsters are not only the Nazis but also fierce vengeful spirits, mutants, or scientific experiments beyond human madness.

We, therefore, review the great world war in a different light through the vibrant cinematographic genre of terror and fear.

It is a genre that someone might mistakenly consider inappropriate to diminish real soldiers’ pain and death on the field.

But, of course, it is precisely the imaginary genre that often conveys the message most effectively.

Yet let’s face it, after all, simply watching an unstoppable monster pump up horror on the Nazis is something that is always a delight for our eyes and hearts.

Thus, now let’s not feel too guilty, settle comfortably in front of our TVs, and the blood bath begins.

One platoon of Nazis disrupts the peace of a small town in Romania.

Their instructions are to secure the place, ensuring passage for the troops that will follow.

The soldiers choose an ancient stronghold surrounding a thousand-year-old castle as their headquarters field.

Therefore, the group takes possession of the castle, settling inside the forlorn fortress on the mountainside.

From the depths of this forgotten place, there comes to life an ancient creature with uncontrollable power.

This demon starts to savagely butcher the Nazis, asking the command for more troops as reinforcement.

In charge of the new soldiers is a ruthless officer, enthusiastic about Nazi ideology.

He does not believe the soldiers’ testimonies about the demon and is confident the murders are the work of rebellious partisans.

Consequently, he starts a violent reprisal against civilians to find the killers, but obviously without results.

By then, a sick old doctor, his daughter, and a mysterious stranger become the town’s only hope for survival.

Superior race against a superior being

The Keep is one of Michael Mann‘s first movies, yet looking for his style, attempting the horror genre for the first (and last) time.

Unfortunately, this experiment was a commercial flop before the tremendous success of the Miami Vice series and movies like Heat or Last of the Mohicans.

I have always appreciated it, just as I appreciate directors who venture outside their comfort zone trying new ideas.

However, the failure was minor, given the total budget was less than 10 million dollars.

Yet despite paying for the shot, this movie expresses the Nazi war horror with great effectiveness through fantasy.

The castle demon indeed isn’t any better than soldiers, all the while telling the last survivor on the field by stating, I come to you.

Hence, this spirit embodies all humanity’s hatred and wickedness, which the Nazis were shocking and historical examples of.

The face of the madness of the Swastika is an excellent Gabriel Byrne, a German troop leader who is proud of his Aryan superiority.

This actor was also at his beginnings like the director before consecrating himself as a protagonist in Miller’s Crossing and Usual Suspects.

Also playing a small but fundamental role is Ian McKellen, the evergreen star of movies such as Lord of the Rings and X-Men.

In conclusion, we can say that this is a film buried and forgotten in time, but every horror lover should exhume and reassess it.

A small group of American paratroopers survived their plane crash after a terrible Nazi bombing of their fleet.

Since they are entirely alone in hostile territory with the enemy around them, they decide to complete their original mission at any cost.

They thus infiltrate a small village under German control, intent on interrupting their communications.

They plan to destroy a radio tower inside an old church, which is under strict army control.

With the help of a brave local woman, the survivors venture to explore the enemy outpost.

However, inside the church, they will make a terrifying discovery: a secret laboratory where the Nazis carry out horrible experiments on human beings.

Their goal is to make German soldiers tougher and resilient on the field, to the point of even trying to bring the dead back to life.

While an insane Nazi officer hunts them down, the group plans to raze the church and its hellish mutant laboratory.

The mission will probably be a one-way ticket for everyone, but they soon realize they have no choice.

On the dawn of the great U.S. Normandy landing, the fate of the war and the world will be in the hands of these young boys.

Overlord is a small horror movie with no pretensions to being anything more than it is and succeeds in this perfectly.

Julius Avery as the director does his honest job under the watchful wing of veteran J. J. Abrams.

Every character has plenty of focus on their roles, yet they still succeed in standing out interestingly.

Jovan Adepo is the main protagonist, a recruit thrown together with as meat to clear the Allied invasion.

He is a human and credible soldier, with no excesses of Rambo-like infallibility, which we civilians can also identify.

Wyatt Russell, charming officer complex and pure, more within the standards of hero stars and stripes, is at the head of the brave handful.

Lastly, the beautiful Mathilde Ollivier deserves a small mention. She plays a lovely French girl working with the Americans to save her son from the Nazis.

We may say, in a word, this movie achieved its purpose, to tell a tale of horror within the war.

This fairytale cleverly mocks Swastika’s delusional dream of glory, which the Nazi doctor personifies, dreaming of the superior race’s immortality.

Back again on the German trenches horror, this time around the world war’s end rather than the beginning.

The Nazis, now close to total defeat, are desperately fleeing France having partisans and Allied hunting them down.

Amidst this chaos, a squad of joint British and American soldiers on the field hears about a secret bunker called Trench 11.

The respective governments demand an immediate investigation because it could be an underground chemical weapons factory.

Once on-site, they find that the bunker is in a state of abandonment and ruin due to a bombing raid of the Germans.

Afterward, the group enters the bowels of the research complex, discovering a crowd of men who are now insane.

Having shot some to defend themselves, the soldiers discover that these were all human guinea pigs in a project named Wotan.

The research was to develop highly aggressive worms in order to decimate the enemy’s stockpile of livestock.

However, the project was more than the original intentions, developing a terrible biological weapon to exterminate the entire human race.

The soldiers will then have to escape from that damn location, avoiding a crazy Nazi doctor trying to bury the secret in explosives.

Trench 11 is another low-budget horror novella, this time from Canadian production.

This is pretty much Leo Scherman‘s only movie experience, otherwise permanently regular in TV stuff.

It’s a shame for a director in the making who seems to know his job, mixing horror and war with a flair for style and a wise pace.

The story takes mostly in bare, rundown interiors, dragging the protagonists into a claustrophobic maelstrom of scientific madness.

Despite the poor production, it maintains an excellent narrative tension between the various characters, including the German soldiers.

The command would indeed like to bury and forget the project.

However, the young doctor with the face of Robert Stadlober has other plans.

Like the dictatorial apparatus of which he is a part, the man cannot accept the imminent Third Reich defeat.

He dreams of dragging all of humanity into the Nazi’s pit of delusion of omnipotence.

That’s why he intends to carry out the extermination of everyone and not only for the Jews, this time.

Another proof that evil never dies, just like viruses do, mutating only in different shapes in order to survive.

Brothers Nest – Hate And Love In A...