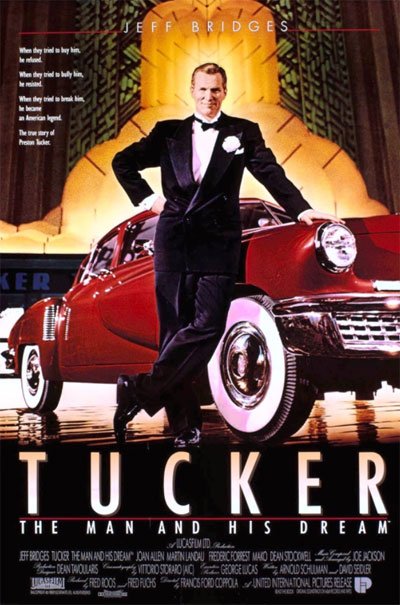 Tucker: The Man and His Dream is a movie about a man’s dream, Preston Tucker, fighting to realize an innovative car, the 1948 Tucker Torpedo.

He desires to teach the concept of safety to the prominent manufacturers, who immediately see him as a dangerous enemy.

Back then, too often, there was a tendency to economize on production, putting the lives of American drivers at risk.

Tucker’s project is to build a safer, faster, and more comfortable car than the competition offers.

But the powerful economic interests that revolve around the automotive industry will begin to press hard to stop him.

Preston Tucker sadly realizes that the birth of his dream car has to face the greed and corruption of men.

Through corrupt politicians, his opponents make it very difficult for his factory to find construction materials.

In addition, his company’s manager is against him, plotting to change his car’s project drastically.

At that point, the countdown flows relentlessly toward the contract deadline.

The only people helping him are his family and closest friends, including the great Howard Hughes.

The famous aviator, industrialist, and engineer helped him find the needed materials to make a prototype.

And even though, in the end, power defeat Preston Tucker, he fulfills his dream of making a legendary car.

One family against the world

Tucker: The Man and His Dream is a love hymn to the world of cars and imagination, creativity, and willpower.

It is deplorable how the government and corporations do anything to stop a small entrepreneur from entering the market.

This historical episode strongly clashes with the romantic idea of the United States as the land of opportunity for young capitalists.

They play in a system that breaks the legs of those who do not bend on the rich, ignoring the talent of extraordinary men.

Basically, we see how the industry is on par with Las Vegas, a fake game where the house always wins.

Luckily for him, Preston Tucker’s family didn’t let the industry intimidate them, gathering even tighter around him.

In his hard struggle, which lasted nearly two years, they inspired countless other men to dare to create something new.

It was something that the industry didn’t want at first, only to recognize its genius and copy it many years later.

Indeed, the 1948 Tucker Torpedo originates numerous features we still have today that have saved countless lives over time.

Finally, we wonder what innovations today’s industry would rather ignore to save on production costs.

Francis Ford Coppola possesses a rare talent for recreating worlds from scratch that were long ago.

We have experienced epic stories such as Apocalypse Now and The Godfather saga through this director’s imagination and will.

His skill is also evident in this movie, where the historical reconstruction of sets and costumes borders perfection.

Moreover, the main character is the great Jeff Bridges, as young and enthusiastic as Preston Tucker towards his car.

His performance is a joyful and angry little revolution, intensely characterizing the various episodes of his life.

The magic and rhythm of the story transport us to the heart of the drama of the entrepreneur.

We witness the story of a man who, unfairly, all the leading figures in society despise and oppose for no reason.

Or rather, there is a reason, and of course, we’re always talking about money, the damn money.

At his side, there is another magnificent star Martin Landau, the historical face of international cinema.

The actor plays the role of Tucker’s right-hand man, an accountant with a shady past who helps him in the enterprise of making the 1948 Tucker Torpedo.

The parade of Preston Tucker’s 50 cars in front of the courthouse is a great victory for humanity, despite the financial defeat.

In conclusion, this is a movie that we cannot but pay homage to after this post, whereby I humbly applaud a legend in automotive memory.