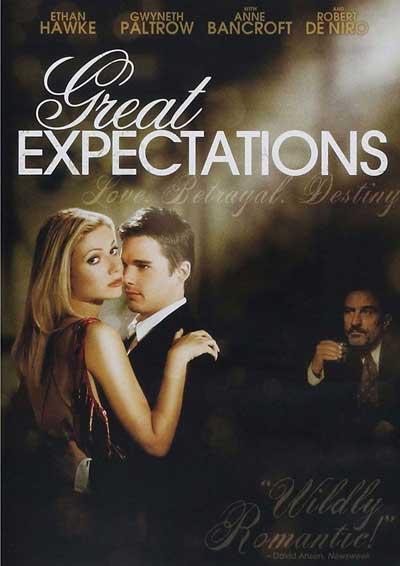 Great Expectations is the love/war story of a young boy growing up in the poorest neighborhoods of a small Florida town.

Life is hard for his family, who cannot afford to give their son the education he wants to become an artist.

Indeed, he has a passion for painting, which he cultivates everyday in the hope of getting out of that place.

He keeps company with an eccentric old lady in the solitude of her large and elegant house to earn something.

At first, it’s a job he detests, just as the lady despises him and his vulgar and ignorant ways.

Until, however, he does not make the acquaintance of a young orphan that she has adopted, falling in love instantly.

The little girl ambiguously reciprocates his feelings, sometimes seducing him sensually and other times cruelly rejecting him.

As the years go by, the boy’s artistic talent manages to emerge, thanks to the benevolence of a mysterious benefactor.

At that point, he decides to move to New York, where the numerous art galleries could open the way to success.

Arriving in the city, he finds the girl grown as a beautiful woman and about to marry a petite arrogant, conceited nobleman.

Finally, it comes the time to decide what to do with their lives, with their love becoming an impossible mirage.

The old lady has raised the girl as a weapon of seduction to take revenge on men with her beauty that they can never have.

She can never liberate her life’s education, even at the expense of her feelings, playing love as a ruthless war.

When family is a dead-end trap

A story that focuses on the impositions of families towards their children, sometimes castrating their aspirations and talents.

These children end up seeing the inevitable fate that life has in store for them, trapped in the frames of their world.

The parallel between the social classes puts them in the same trap, with other people making decisions for them.

It is difficult for him to break free from the shackles of poverty with a family that doesn’t understand him.

In the same way, she can’t escape the strict wealthy stepmother, who doesn’t care about other people’s opinions.

The arrival of an anonymous benefactor upsets these balances, allowing them to escape to the great New York.

But the mysterious man will be signed between them, then becoming a slipknot, forever strangling their destiny.

The ridiculous war of the sexes revenge affects everyone, rich and poor, with the same viciousness pain as love.

And, in the end, it spite ends up irreparably ruining the undeniable love between these two young people.

Like Romeo and Juliet, distant because of the hatred families, the protagonists will never be truly free.

So in this modern fairy tale, to sum up, it is the adults who are the monsters who devour the children.

A director and actors with great expectations

Great Expectations is the second high-budget production for Alfonso Cuarón, after his Hollywood debut in 1995 with A Little Princess.

Before that, he had only made Sólo con Tu Pareja, a small, surreal original and funny, independent Mexican comedy.

Since then, the director has been climbing the ladder of success with increasingly complex and expensive films.

A brilliant career was arriving at major international blockbusters such as Gravity and Children of Men.

For the film adaptation of Charles Dickens, the two protagonists are the charming and charismatic young Ethan Hawke
and Gwyneth Paltrow.

The latter came from the tremendous worldwide success of Sliding Doors, then repeated a few years later with the other romantic comedy Shakespeare in Love.

On the other hand, Hawke has been a star since his childhood in Explorers, arriving in Andrew Niccol‘s great dystopian sci-fi Gattaca just before this movie.

He perfectly cast the two actors in their roles, valid in both ancient and modern times.

They play a love story in the men vs. women war with great naturalness, dramatically and romantically.

Their characters appear human and believable, sometimes solid and determined, and other times sadly lost in reality; they don’t understand.

Cuarón’s hand enhances their beauty and innocent sensuality with elegant and refined photography.

Thanks to his ability to the camera, he turns their youth into a cat-and-mouse game between inexperienced and confused lovers.

He makes narrative pace and timing to perfection, squeezing in almost two hours all the essentials of Dickens’ literary masterpiece.

Finally, the small part of the great Robert De Niro is terrific, here in a secondary role that we will understand well in the final.

In conclusion, it is an excellent movie that derives from a beautiful book, essential for lovers of romance and growth novels.