The Man Who Killed Hitler and Then the Bigfoot 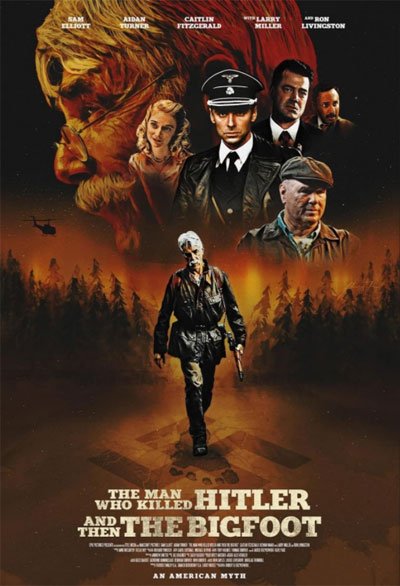 In February 2019, more or less to general indifference, The Man Who Killed Hitler and Then the Bigfoot was released in theaters.

The story is about a former World War II soldier who is now long retired.

Today he lives quietly anonymously with his faithful dog, meeting only his brother from time to time.

But behind the delicate appearance of this lovely older man lies one of the biggest secrets of the war.

Very few people know a secret, including a government official who visits him on a particular assignment.

The officer arrives with a representative of the Canadian government, concerned about an international severe medical emergency.

Indeed, in the border forests between North America and Canada, a mysterious creature spreads a deadly infection throughout the area.

The creature is none other than Bigfoot, the legendary beast and missing evolution link between apes and human beings.

The government turned to him because of his excellent skills as a hunter and discretion in special assignments.

Going back to the war, he hunted down and killed Hitler, who hid among his men using different look-alikes.

That feat brought him neither glory nor medals, rather he will forever have to remain silent about everything.

All he has left is only the memory of lost love and the remorse of being a murderer.

But to save the fate of all humankind, the weary man will have to go back to killing again.

Many people I happen to talk to about movies have never heard of The Man Who Killed Hitler and Then the Bigfoot.

Some misunderstood the genre, believing that it is even a demented movie about World War II.

But it’s a more complex and profound story than you might imagine.

The two monsters of the title, Hitler and Bigfoot, are just an excuse to talk about nostalgia and one man’s past.

A soldier who sacrificed his happiness for his country committed himself to a mission that unfortunately proved futile.

Indeed, killing Hitler did not end the war. The Nazi high command used some look-alikes to make everyone believe that he was still alive.

That mission changed his destiny forever, distancing him from the woman he loved for a reason he could not tell anyone about it.

When he finally thought he had found peace in his old age, a new monster appeared on the horizon, threatening all humanity.

But Bigfoot will turn out to kill because of his nature and not because of a delusional dream of power and conquest.

Therefore, when he kills the creature, in the end, and even more significant pain will accompany him for the rest of his days.

The tired face of an entire generation

We may not remember Sam Elliott as the best actor in cinema history, but he has the perfect movie face for any role.

I remember him with a smile as the Dude’s friend in Ethan and Joel Coen‘s magnificent The Big Lebowski.

In addition, the actor was also the narrator of that movie, ironic and wise at the same time.

The soldier’s character in this story seems to be tailor-made for him and his wrinkled old oak face.

Indeed, he is almost entirely alone much of the time, holding the scene perfectly on his shoulders.

On the other hand, Aidan Turner plays the various flashbacks, where we see his youth as a soldier and boy still full of hope.

These flashbacks are the origin story of a great hunter, whom the government wants to mold into a lethal weapon to use secretly.

But the boy fights against his desire not to kill, feeling guilty despite his ability as a shadow assassin.

Also always present is the never fulfilled love story with the beautiful and kind Caitlin FitzGerald.

A love that we could define is almost spiritual, which embodies the man’s desire to live in peace and freedom.

In conclusion, The Man Who Killed Hitler and Then the Bigfoot is an excellent debut for Robert D. Krzykowski.

The director personally wrote and produced this movie, evidently feeling that it was a particularly fond project.

Seeing the result, I can’t help but mark his name on my notebook, looking forward to his subsequent work.