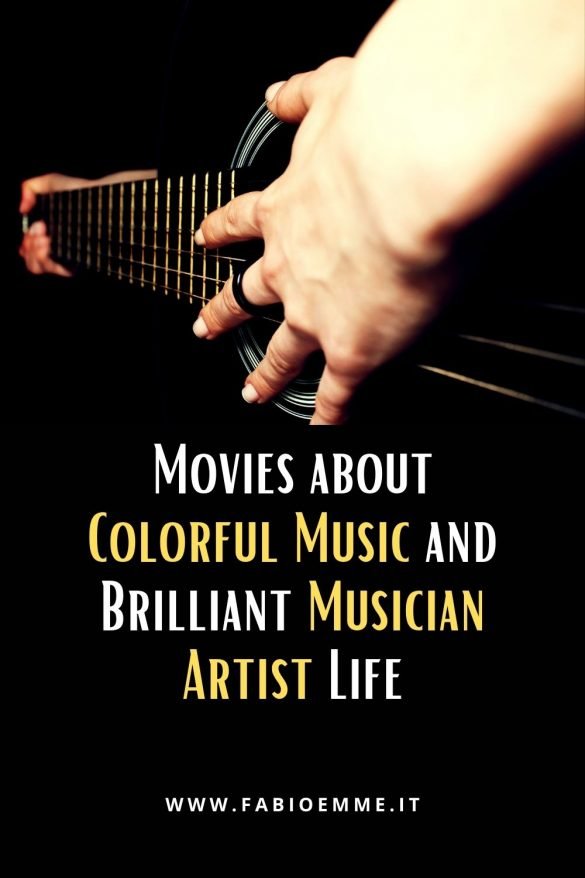 Music has been a fundamental element of cinema since the silent movies, where the work of the musician artists was the only sound in the story.

Each of us has at least a couple of soundtracks that come up once a day in our memories.

It can be the Rocky tune to working out at the gym or the Pretty Woman song to go shopping.

Or it’s simply some beautiful scenes that come back to us with their powerful melodies.

I, for one, have what I call a Morricone moment in my day, remembering the sadly departed composer Ennio Morricone.

What kind of music do you love? I’m curious; let me know with a comment if you wish.

For now, let’s watch some movies about music and musician artists with a difficult life and a suffering soul.

This movie is about the last musical tour of Christa Päffgen, better known as Nico, for her musician artist career.

At 50, she is a grumpy and intractable artist, but everyone recognized her as an enviable and eclectic talent.

She had an evolution of life unsuspected previously since the woman was a beautiful model in her youth.

During this long journey through Europe, she faces her problems with drugs and a psychologically unstable son.

Unfortunately, an increasingly tricky relationship will end in tragedy, inspiring one of her most beautiful songs ever.

Her manager and the rest of the band struggle to cope with her temper and constant drug abuse.

As a result, her concerts are not always accessible, like the police interrupted in a school in Prague.

A sudden and dangerous interruption makes them hasty getaway by car in the middle of the night.

But she found something in many tour stages, a new love with an Italian man she would later marry.

And perhaps, in the end, there could also be apt for this adorable little devil that the public renamed the priestess of darkness.

The extraordinary voice of Beauty and the Beast

Nico, 1988 is an exciting and engaging biopic about a woman who is challenging to understand fully.

A woman who has incredibly transformed herself over the years, changing into an artist in her maturity.

Another great artist like Andy Warhol noticed her at the beginning, insisting on including her in the Velvet Underground.

With her talent, she then emerged from that oppressive world, building her innovative solo career.

Susanna Nicchiarelli does a great job in researching and staging her last years.

The Italian director skillfully combines historical episodes with an exciting plot, with a fantastic Trine Dyrholm as the lead actress.

It is a story humanly full of nostalgia and sadness, as in her complex relationship with her son.

The musician artist seems to have had a son with the actor, Alain Delon, even though he never recognized him as his own.

The various scenes flow fluidly from one location to another to the rhythm of Nico’s splendid music.

A piece of music that touches the most hidden parts entering our soul and staying there forever.

Far from the biographical commitment of the previous movie, in this case, we are instead talking about fictional characters.

This story begins with a miserable suburban farmer living alone in a wretched Tennessee slum.

The man was formerly a talented singer who ended up in disgrace because of his violent and unstable character.

Until one day, he finds a half-naked girl lying completely drunk in front of his door.

She, too, is going through a tough time, with no purpose in life and sexuality that is dangerously unconventional.

The girl initially rebels furiously, especially when she discovers that the man is holding her prisoner with a chain.

But in reality, he has no bad intentions, just trying to help her in the only way she knows about her.

In return, the girl will help him in her way, giving him back his passion for music and life.

To help her clean up, he grabs her guitar again, strumming her blues as she tells her about his life.

A path that will be difficult and will not necessarily have a happy ending, but it will still be a new chance for both of us to start over.

Black Snake Moan is a movie about blues and hardships that sometimes lead to creating art from the dark.

Both protagonists have their dark side that they cannot dominate, ending up in trouble for their instinctive drives.

Samuel L. Jackson is a musician artist falling from success to loneliness, unable to handle his anger and resentment.

His friends would like him to return to the world of music, only to end up angering him even more.

Ironically the only one who can save him is a girl angrier than him, the beautiful and wild Christina Ricci.

Her character is ambiguous and charming, unable to live generally due to profound childhood trauma.

Finally, we also have Justin Timberlake, the complicated and touchy boyfriend, who plays quite well in a secondary part.

Craig Brewer realizes a good movie about music like the next Dolemite Is My Name with Eddie Murphy.

And for us, it is a chance to finally see Samuel L. Jackson in a different role that shows another side of the great actor.

For the latest movie, we’re back to real life with the fictional biopic of singer Frankie Valli.

In his youth, he grew up in the slums of New Jersey, forming a small band with his friends.

Their existence continues through the years as they search for a chance to make it in the music business.

But they also have to deal with the criminal environment in which they live, ending up several times in trouble and even in jail.

Until one day, they realize a very successful song, thanks to the help of a producer who finally recognizes their talent.

At that point, the four boys made a name for themselves in America, climbing the charts under the name of The Four Seasons.

Unfortunately, along with fame and money come the first problems within the group.

Some of them are born envy and resentment, fueled by the fact that large sums of money are missing from the common fund.

In addition, their leader Valli has to face the deep pain of the death of his young daughter, also a promising singer.

But it will be in her memory that they will create together the most famous and unforgettable song of their career.

Clint Eastwood makes a talented movie about music with his impeccable style and class.

The director wisely divides the musical parts into the personal moments of his protagonists, mixing them in the right amount.

As the leading actor, he chooses John Lloyd Young, a talented young man who plays entirely in the role of Frankie Valli.

His character initially seems like a weakling, who let others manipulate him, but he reveals an unexpected strength along the way.

Then when economic problems seem to crush his group, he’s the one who mediates a solution with the mob.

Equally good is Vincent Piazza, a problematic boy who, however, is also the one who puts the group together at the beginning.

Also, as we will ironically discover at the end, he will later become a great friend and handyman of the prominent actor Danny DeVito.

Finally, we cannot avoid talking about Christopher Walken, simply the best as the boss commanding crime in that part of town.

A dangerous boss who will try, in his way, to help the young singer and his friends make their way to glory.

In summary, a group biopic that unites and divides young singers, leaving us with the smile of a pacifying ending.

The Man Who Killed Hitler and Then the Bigfoot