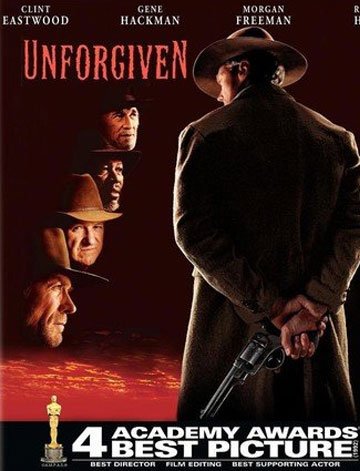 Unforgiven is the story of the return to Wyoming violence for a tired old gunslinger with the face of the legendary Clint Eastwood.

The man has been away from his criminal past for years, raising pigs along with his two young sons.

But one of his old cronies comes back to visit him, proposing to pair up again for one last work.

Across the country, the rumor goes around about a thousand dollar bounty for killing two cowboys in Wyoming.

He is hesitant at first, but wishing a better life for his family, ends up accepting.

The two friends begin to ride to their destination, along with a younger, blustery, and arrogant gunslinger.

Along the way to Wyoming, they discover they have changed a lot over the years.

Far from the excitement of their young partner, they doubt about can kill as quickly as they once could.

When they later arrive in town, they discover that the sheriff has brutally beaten another bounty claimant.

Indeed, it was the local prostitutes who collected the money, seeking justice on their own.

Their goal is to avenge a friend scarred by two young cowboys without severe consequences from the law.

The sheriff publicly humiliates and beats the old gunslinger, who crawls away in the rain to save himself on the first night.

At that point, it becomes clear that their presence in town is more challenging every day.

The group feels the temptation to give up, facing both the cowboys and the local authorities.

But that money is too precious to let go, and they must inevitably once again become the cruel killers they once were.

The sunset of a cruel and beautiful world

In Unforgiven, Clint Eastwood reaches the pinnacle of his career with this loved hymn to the old west.

The American actor and director draw on all his experience in western movies, painting an unforgettable masterpiece.

We can see in every frame his years alongside directors like Don Siegel and Sergio Leone.

But while drawing inspiration from his long career, Eastwood creates his own personal and recognizable style.

In this context, the beauty of the great American landscapes clashes with the brutal ignorance of those times.

And among that dirty and vulgar world, ironically, the evilest and cruel man should defend the law.

Therefore, the sheriff’s shining star becomes the oppression symbol of the weakest, with injustice reigning over everything.

The sheriff and the gunslinger thus represent the past that is about to disappear.

A legacy of the old gold rush and freedom, swallowed up by the imminent future of progress and civilization.

But before the end, this past has one last burst of violence that bathes the dusty streets of Wyoming in blood.

And perhaps something good will arise out of death and sorrow, if these unforgiven men find peace one way or another.

A perfect concert of formidable actors

With a story like this, the choice of the cast to play it is essential.

As mentioned, directing and starring is the magnificent Clint Eastwood.

This man can not get rid of his bloody past, which still chases him after many years.

The scene where he starts drinking again after years of sobriety is impressive, followed by an unforgettable shootout.

The faithful and wise Morgan Freeman is at his side, also a weary gunslinger looking for one last chance.

It is money that brings these two men, who had managed to escape from that ruthless world, back into the fray.

Before cashing in, however, a titanic Gene Hackman stands in their way, perhaps in the best role of his long and glorious career.

The actor is a cruel sadist hiding behind the supposed justice, justified in his actions by his badge.

But for him, as for all, rings the bell of the last round of his life.

As a result, the final duel in the saloon is genuinely the swan song of the classic westerns of yesteryear.

And the magnificent and crazy gunslinger walking away in the dark and the rain is like the curtain falling forever on the cinema that is no more today.

Clint Eastwood Unforgiven is a work that will remain in the hearts of all film lovers among all generations, riding to Wyoming with its protagonists forever.

A lesson in cinema that, personally, I will never tire of watching again and again as if it were the first time.