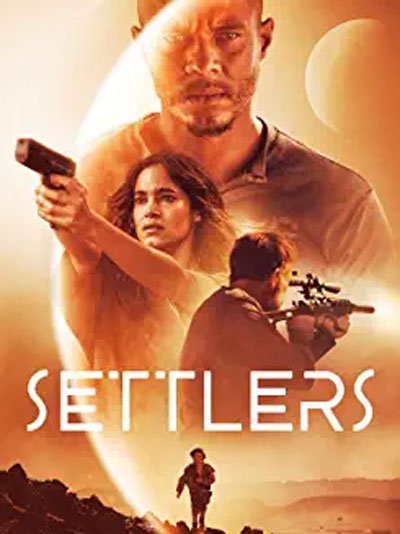 In the distant future, the new era of settlers is concerned with the colonization and terraforming of outer worlds.

On one of these remote planets, a small family lives in the isolation of their shelter in a barren, lifeless area.

Father, mother, and their little girl endure the loneliness by sticking together and protecting their crops and scant livestock.

Until one day, some soldiers show up at their door, demanding to abandon the shelter and leave it to them.

The situation immediately escalates, and the father manages to protect his family until the last of the invaders kills him.

The survivor introduces himself to the surviving mother and daughter, saying that he was born and raised there.

Indeed, before the family killed the shelter owners, they welcomed them after their spaceship crashed.

But inevitably, they end fighting each other when they try to kick them out once knowing that she is pregnant.

Today he has no desire for revenge or murderous intentions, considering it as something they can no longer do anything.

He wants to stay where it is possible to survive since it is the only oasis on the planet only with sand and rocks.

Initially, the mother seems to accept his presence and even starts a romantic relationship with him.

But later, the desire to avenge her husband grows uncontrollably, and she dies while trying to kill him.

At that point, the little girl has to accept the murderer of her family and grow up with him until the extreme consequences.

An outer world made of only three settlers

Settlers is a slow-paced, meandering sci-fi about a few essential characters and their profound changes over time.

With time, tools and machinery become older and more challenging to repair and their scarce food and water supplies.

The only real reason they survive is that they are very few and therefore don’t need much.

The whole story is like a social experiment about the destruction and birth of a family.

In this world, what is the murderer of a loved one today can become your lover tomorrow?

The standard conventions of society fail in this era, of which we know that colonization has failed miserably.

Families and settlements live apart in these massive domes scattered across the planet, each unreachable to the others.

Anarchy is born without any external authority where the strongest takes commands, imposing its unfair and arbitrary rules.

When the only surviving man becomes aware of his power, the step towards the final madness is all too short.

But the little girl has her cards to play; even she’s defenseless against the invader’s overbearing presence.

Her best weapon is curiosity, knowing the world around her and, especially, how she can use it to her advantage.

Another element that may seem secondary is the little robot, the little girl’s friend, like a trusty pet.

His presence moves in the background as a simple household appliance that performs the most humble daily tasks.

But we will later discover, along with the protagonists, that he too has his feelings and makes his own choices.

In conclusion, in the indifferent era of the outer world justice of desolation, they all must pay the price for their actions, including the colonization robot.

Good the first one

Wyatt Rockefeller makes an excellent debut with Settlers, after some shorts where he had already shown his talent.

The director wisely uses the few means and actors at his disposal, making an almost western story.

Jonny Lee Miller plays the family’s father, harsh and hostile to everything outside their home.

But of course, brute force is always trumped by greater violence, the boy Ismael Cruz Cordova.

At first, he seems like a reasonable person who had to kill out of necessity, but things soon change.

Sofia Boutella is beautiful and tender as a mother, unlike other movies where she does more action roles.

Indeed, this time the actress focuses on acting without choreographing fights where she often showed off her skills and past as a dancer.

Finally, the two actresses who play the daughter, first a child and then a teenager, are also perfect to describe the future colonization era.

The little Brooklynn Prince is the one who has the most space, but the young Nell Tiger Free manages to impress, even if only in the final chapter of the story.

The movie split into various chapters dedicated to the characters, each with their specific personality that changes this outer world drama over time.

Settlers is an easy movie to follow but harder to fully understand if you watch it too superficially.

Many plot knots are found in the silences and not in the dialogues, like the final part where the now grown-up daughter says very few words.

And even I find myself almost speechless, not wanting to say more about a movie that I would like you to discover for yourself.

So I hope you’ll appreciate my advice to watch it, as it’s a kind of sci-fi that I have always loved.