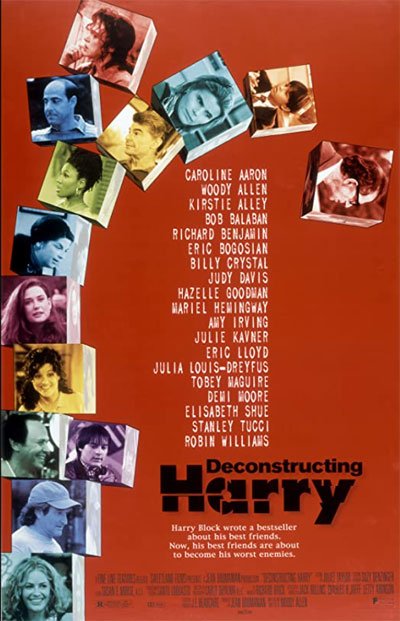 Deconstructing Harry is a movie in which Woody Allen analyzes his existence and enjoyment of living as a young child in his 60s.

The brilliant director plays a writer who has lost his creativity as personal problems overwhelm him.

We closely follow his attempts to start writing again, taking cues from his wacky experiences.

We review his life highlights, his many wives, and problems with friends and colleagues through the characters he creates.

His relationship with a young student seems to end, as he doesn’t want anything more serious.

But when she declares to him that she wants to marry a friend of his, suddenly he wants her back again.

Meanwhile, the school that once criticized him today wants to bestow an award on his career ironically.

He’s not at all interested or excited about receiving it, so he desperately looks for someone to accompany him.

In addition, his ex-wife is furious because he exploited some embarrassing details of their relationship in her last book.

Out of spite, she doesn’t want to let him see her young son reacting hysterically to his requests.

At that point, he ignores her protests and kidnaps the child.

This trip takes him along with a prostitute and an old friend to the award ceremony.

But as always, for a man so simple and complex at the same time, things quickly become complicated and unmanageable.

Deconstructing Harry is a hilarious parody that Woody Allen makes of his life, no longer young and increasingly tired of the people around him.

The writer of this movie ironizes with his art about family, marriage, religion, and psychoanalysis.

Through his books, he re-examines the secret sins of his friends, their wives, and lovers.

He mercilessly illuminates all those gestures they are ashamed of every day, their desires, and unmentionable secrets.

While doing so, he becomes a rich and famous artist, but his life falls apart before his eyes.

So it might seem to you that it’s more of a literary work than a movie, but that would be a big mistake.

Indeed, the director very stylishly stages a series of skits that feel like so many shards of a thousand different stories.

His irony is always sharp and hilarious, moving effortlessly from a sex scene in a funeral to a chat with the devil in Hell.

And as he has the ghost of one of his deceased friends, who visits him while he’s in jail, say:

To be alive is to be happy. Take it from me.

Of course, if someone who has just died says this, we can believe and listen to him impartially.

Discovering the meaning of life with a laugh

From when he was young to the present, one of the main strengths of Woody Allen’s movies is Woody Allen himself.

Don’t get me wrong; I also loved the movies without him as the lead actor like Midnight in Paris or Match Point.

But at the end of the day, these stories’ protagonists are nothing more than a mirror of the director.

So maybe we might as well have the original without any intermediary.

In this case, although he is the primary actor, he hides his experiences behind skits played by others.

The highlights of his life feature an outstanding cast, including Demi Moore, Stanley Tucci, and Tobey Maguire, among others.

Probably the one that sticks out the most, ironically, is the cameo by Robin Williams that the camera can’t entirely focus on.

This blurry character might be the best metaphor for the uncertain fog that passes through the writer, unable to write anymore.

But personally, my favorite is undoubtedly the excellent Billy Crystal.

The actor plays wonderfully two roles, the friend who steals his girlfriend and the devil himself.

His scene in the heart of Hell is one of the funniest in Allen’s entire filmography, full of ideas and irresistible gags.

Deconstructing Harry is one of this great little American artist’s most anarchic, irreverent, and funny movies.

A director who travels beyond the second half of eighty years, but still as enthusiastic as when he was young, nobody knew who Woody Allen was.

So let’s get all the joy we can from his works, hoping he will delight us for a long time.