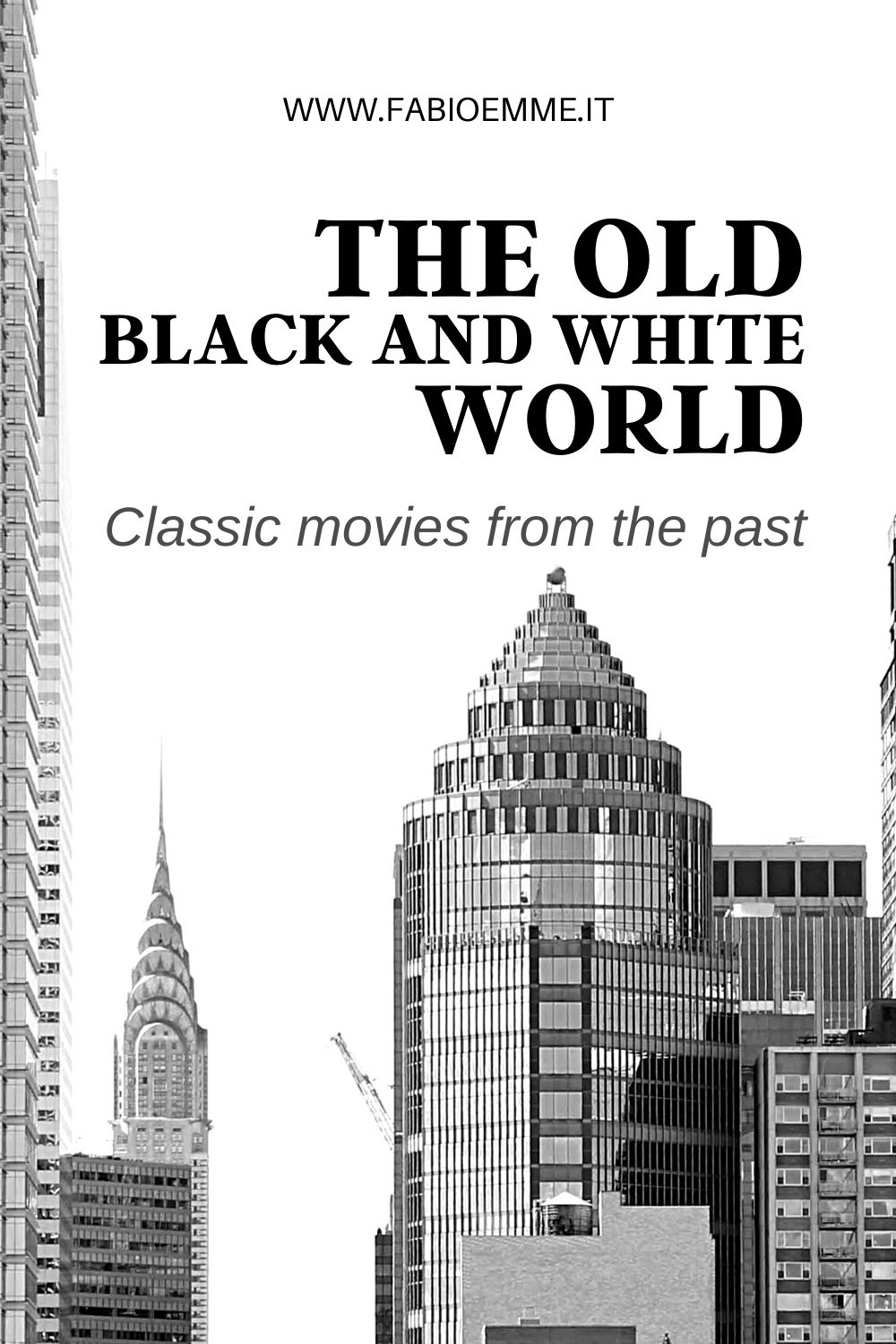 Is there still room in the modern world for the great black and white classic, among which live some unforgettable cult movies of film history?

Today’s films are for ultra-high-definition televisions that are now as big as the walls of our house.

Special effects must be the highest, and photography must exalt the thousands of millions of colors of our special TV.

But perhaps the real magic of cinema is not in computer graphics, the 4K format, and Dolby Surround audio.

A film must transport us into a world never existed and never will, telling a story that captures our interest.

Black and white is not a limitation for the movies but is perfect for masterpiece immortal through the decades.

These types of films don’t know age and retain all their strength and expressiveness over time.

Indeed, it’s no coincidence that many directors still choose black and white for some of their most distinctive movies.

This choice happens for multi-million dollar blockbusters such as Steven Spielberg‘s Schindler’s List.

It is also true for small independent films such as Following, Christopher Nolan‘s debut film before Batman‘s saga.

Or we can cite 2020 Monk by David Fincher, the biopic about the intractable and brilliant screenwriter of Orson Welles’ superb Fourth Estate.

After the necessary premise about classic, let’s talk about the movies’ most interest in movies.

So load up your DeLorean and leave two skids of fire on the asphalt, admiring cults from the 40s and 50s.

A sad and pessimistic piano artist lives hardscrabble with his girlfriend, an aspiring singer, and actress.

He could live content to play for pennies in a New York nightclub, but she wants something else.

She rejects his marriage proposal and moves to Los Angeles in search of fortune, quickly ending up as a waitress.

The man misses her terribly, so he starts hitchhiking to reach her on the other side of America.

An elegant and vain bookie welcomes him in his car, but the two do not go very far together.

The following day, he dies in front of him, shocked, who hides the corpse taking his clothes and documents.

At that point, he tries leaving behind and get to Los Angeles, but destiny occurs again.

He picks up a beautiful hitchhiker along the way, unaware that she knows the man he is replacing.

Thus begins a dirty ransom for not reporting his identity theft to the police, even risking the death penalty for murder.

The idea is to get rid of the car at a dealer, split the sale, and say goodbye forever without much fanfare.

But this simple plan to make few bucks becomes a much bigger scam that could net them 15 million dollars.

The Endless Road to Los Angeles

Detour is an admirable example of poor art without great expectations, but over time has become an unmissable cult.

Director Edgar G. Ulmer was an expert in the field, a veteran of low-budget productions, managing in this case to surpass himself.

Just think that this pearl of cinema, which many recognize among classic movies, was made in less than a week.

Even being in the noir genre, it does not have the generic characteristics of the criminal/cop within a detective storyline.

The choice of a lost and unaware protagonist is immediately winning, accompanied by a femme fatale equally weak and confused.

These two losers form an iconic pair of cinema, both on the run and hopeless against an inescapable destiny.

A fate that deludes them into thinking they can finally turn their lives around, putting them both on a road of no return.

But what could have even become the beginning of a loving relationship ends in the impossibility of trusting each other.

All this Ulmer manages to tell in just over an hour of cinema, compactly and effectively, entering the story forever.

And in the end, when the police take away our protagonist, they also take away a piece of our soul.

The second of these movies is a black and white masterpiece cult.

It is a story about the disease of celebrity and the madness that ensues when it disappears.

A young writer is on the run from some loan sharks to whom he owes money, but his car abandons him on the run.

Nearby is a former film diva’s enormous and luxurious mansion, which lives in solitude with her faithful handyman butler.

The woman shows interest in the young man and a screenplay he is working on, inviting him to complete it safely in her home.

Unfortunately for him, her interest is much more specific and profound, as she has fallen in love with the young man and does not want him to leave.

Moreover, Cecil B. DeMille has contacted the diva asking for a meeting, and she dreams that he could give her a leading role.

But in reality, the famous director is only interested in her vintage car, which he would like to borrow to use in his new film.

In the meantime, the writer falls in love with a young colleague he begins to meet in secret.

When the diva discovers the affair, his madness finally explodes.

At that point, the situation finally explodes, and the inevitable tragedy reaches its final act.

i’m ready for my closeup

Sunset Blvd is one of those great films with instant success that immediately became popular among classic movies.

Another unconventional noir that broke with style by even using the protagonist’s corpse as the narrator.

Gloria Swanson immediately became the face of the evanescence of beauty and success that arrives and disappears in a flash.

The silent film diva could not enter the new cinema with sound and color, remaining stuck in the past.

And so, locked up in her crumbling golden castle, she spends her days screening her old successes.

Looking back repeatedly at her lost youth, she despises and ridicules modern cinema.

But when she believes she can be part of it, she chirps with happiness, finding a reason to live.

And when she is denied it along with the love of the young man she believed to be hers, her mind is broken forever.

Billy Wilder sculpts in time another masterpiece, dark and pessimistic even more than the magnificent The Flame of Sin.

As the male lead, he chooses the charming William Holden, a smiling and friendly face that we will see years later in his other cult film Sabrina.

And as he did with noir, his comedies will be a cinematic revolution of unparalleled class and elegance.

And now we come to my all-time cult favorites, perhaps even more so than other great black and white classic movies like Citizen Kane, also by and starring Orson Welles.

The story begins at the border between the United States and Mexico when a wealthy industrialist explodes along with his car.

Captain Quinlan, a famous detective, quickly but effectively takes the case into his own hands.

He joins with a Mexican police officer, who witnessed the attack with his new American wife on his honeymoon.

The investigation immediately points to a miserable worker on probation who has an affair with the entrepreneur’s daughter.

But the evidence framing him arouses the anger of the Mexican policeman, who is sure that Quinlan planted it himself.

A confrontation immediately arises between the two policemen. And no one intends to back down to avoid losing face and respectability in front of their colleagues.

Mad at having to justify himself, Quinlan plots with a criminal to frame his rival’s wife for murder.

But the old Captain is now careless and confused by alcohol and vice he falls into after years of hard sobriety.

His plan crumbles and ends up backfiring on him, tightening the noose around his neck even more.

His path and destiny are unavoidable as the Mexican who will have to face a memorable ending.

He was some kind of a man

Touch of Evil is one of the greatest noirs ever, an epic struggle between the forces of good and evil.

Charlton Heston plays the justice, the incorruptible cop on the launching pad with the arrest of a family of traffickers.

The young and innocent Janet Leigh is at his side, a beautiful diva who we will see later in Alfred Hitchcock’s magnificent Psycho.

The evil Quinlan is a gigantic (for his size and interpretation) Orson Welles with a superb dramatic performance.

Heston convinced Welles (and the producers) to direct the film, although he was skeptical.

But contractually bound to take part, he transformed what was supposed to be a straightforward noir thriller into an original cult film.

After some revisions to the script, the director demanded that the beautiful Marlene Dietrich is in a secondary role that he wrote especially for her.

The actress appears only a few minutes, but Quinlan’s brothel matron and an old flame are phenomenal.

Welles blends all these great actors into an atmosphere suspended beyond space and time.

The light gives an otherworldly cut to the black and white of the movie and the poor and bare locations of the environments.

In short, among the great classic movies in cinema history, it is definitely on the frontline.

It’s up to you to find it and admire its power and beauty even today, which has remained the same as it was in the 1950s.

Today I hope to have talked about movies that you already knew and loved, like me, or even better to have inspired someone, maybe younger, to watch them.