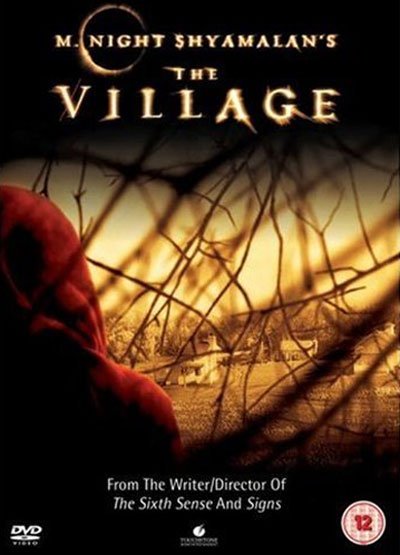 In 2004 The Village by M. Night Shyamalan, one of the most expensive films of his production company, the Blinding Edge Pictures, was released in theaters.

A young blind girl lives with her father in a small village in the middle of a vast forest.

Despite her handicap, she lives an everyday life and is actually about to marry a boy she has known since she was a kid.

But he thinks differently from her, and he’s getting more and more impatient to continue to stay in that place.

Days are very arduous and tiring, but the inhabitants seem happy and lead a peaceful and laborious way of life.

Their daily routine is hard work, family time, and prayer in a small church of which the girl’s father is the shepherd.

But among all of them, there is a fear that no one dares even mention, the terror of something frightening that hides in the woods.

Indeed, occasionally as the sun goes down, some monsters come out of the trees, and they wander dangerously between their houses in the darkness.

Sometimes, they leave a red mark in front of someone’s door, as a warning with the color that seems to attract them irresistibly.

Long before, the village elders had managed to establish a truce with these creatures, establishing inviolable boundaries for both.

Unfortunately, one day her future husband is seriously injured, and the girl has no choice but to face these unnamable beasts.

Despite the fear, she will have to find the courage to cross this forest and find the help that her young lover desperately needs.

But the reality surrounding the mystery of these monsters will be even more incredible than he thought at the beginning.

When fear hides the truth

The Village is a valuable psychological horror with the central theme of irrational terror and fear from mass conditioning.

This small group of houses and inhabitants are a perfect miniature of our world, increasingly lonely and socially isolated.

The anxiety and concern of an invisible and incomprehensible enemy inevitably distort innocence’ and goodness purity.

Everyone can find himself in the many characters as we can see relatives and friends in the many villagers’ faces.

Among them, the bravest but naive young man who wants to escape that oppressive situation.

His is a normal youthful impulse to move away from parents, to discover the world, and be independent.

When that normal condition for development is impossible, then problems begin.

The only thing that binds him to that life is the love of the young blind protagonist, who instead passively accepts the conditions of the elderly.

But at the sight of her beloved at the point of death, she too finally breaks the psychological chains that keep her tied to that place.

We could summarize this movie just like this: an ancient fairy tale that the director narrates in the modern language of cinema.

And like any fairy tale worthy of respect, it must necessarily have a horror soul and its moments of cruel human.

M Night Shyamalan is a director with a recognizable and particular style, often dividing the public.

Because of this reason, his filmography has both international success movies as massive failure cinematic experiments.

Above all, the slow pace of his stories makes the difference, slowly presenting the world he wants to talk about.

It is a feature exalting fans and exasperating detractors, probably accustomed to the fastest times of many modern productions.

The famous horror movie with Bruce Willis grossed nearly $700 million worldwide, opening the doors of Hollywood to him.

He chooses the young and beautiful redhead Bryce Dallas Howard, daughter of the famous director Ron Howard for this movie.

The actress gently plays the role of the blind protagonist, who must run across a forest populated by monsters.

In a word, the director readjusts the old fairy tale of beauty against the beasts in a bright modern way.

In addition, there is an exceptional cast of names such as Sigourney Weaver, William Hurt, and Brendan Gleeson.

The great actors’ trio represents the elders elite who rule the village, with wisdom and respect to the forest.

Finally, equally good are the two guys both, in their way, in love with her.

Initially, they are close friends, despite their difference, but it’s only a matter of time.

To summarize, The Village is the most perfect and complete work of M Night Shyamalan and his production company.

What do you think? Can we put it among the director’s successes, or it’s just another failure?