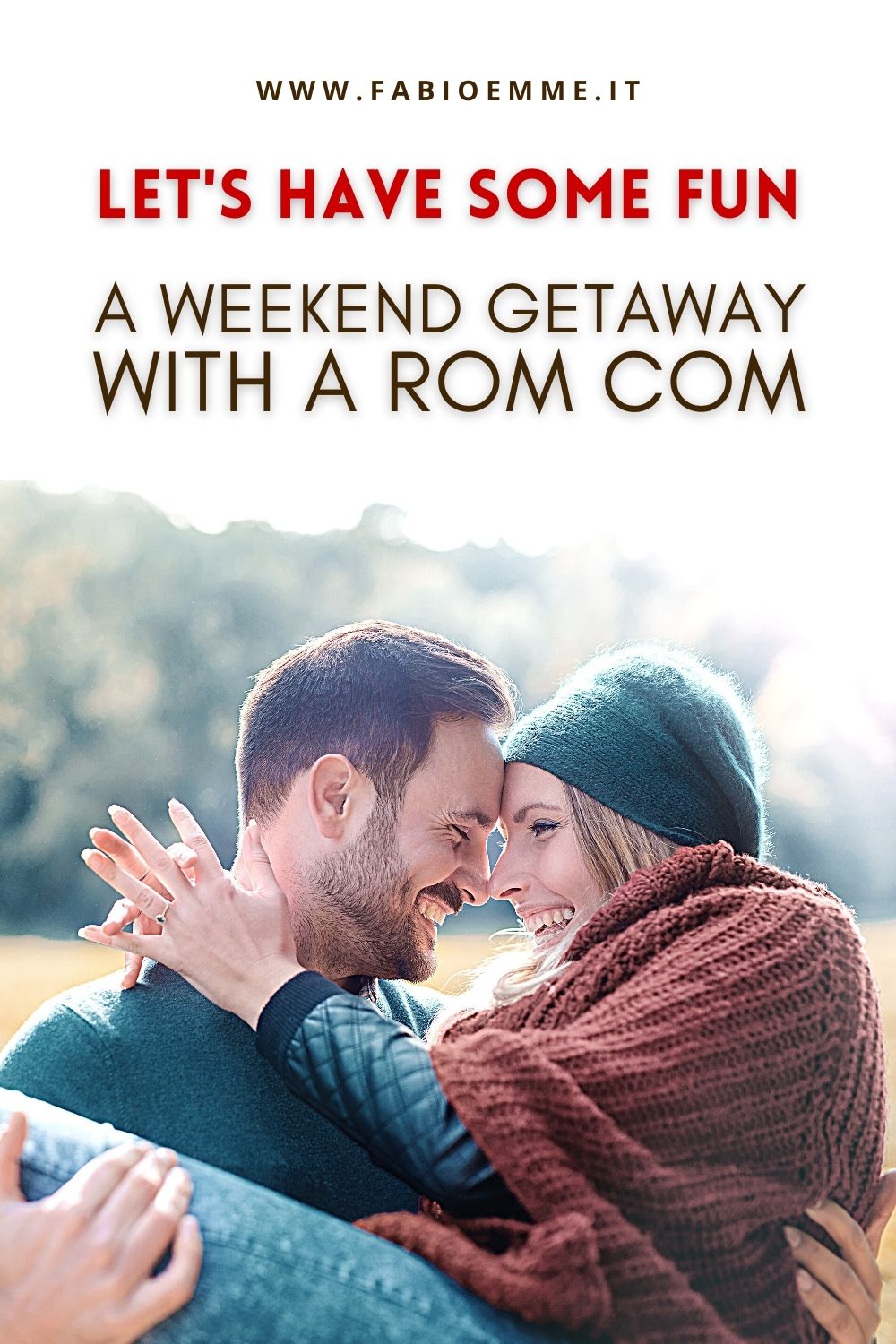 After a hard week of work or study, what could be better for your weekend than fun and light rom com getaway with your friends and family?

Lately, life is constantly stressing us daily with lousy health and political news, so let’s get away from reality for a few hours.

The world of cinema does this magic, breaking our everyday routine making us live adventures of all kinds with characters out of the ordinary.

A spell that can reunite a couple after a bad day, two friends after an argument, or even parents with children when they don’t talk to each other.

If we then add some romance to the comedy, the formula is complete.

My words may seem exaggerated, but believe me, because I am speaking from personal experience.

Many times I have felt overwhelmed by anger and disappointment on my darkest days.

And it’s in those moments that rom coms like these that I’m going to tell you about have helped me like I wouldn’t have believed.

I’m not saying these movies will solve the problems in your life, but smiling has a therapeutic power that you cannot underestimate.

With that brief but necessary introduction, let’s begin this weekend getaway into comedy and love.

A somewhat slacker and unlucky guy loses his job for the umpteenth time.

His family, exasperated by his inconclusive life, gives him one last chance in a supermarket.

The job is not the most exciting, as he will have to do the night watchman after closing.

Preparing himself for a long night of boredom and cleaning, the boy begins the new experience without much enthusiasm.

But fate has a surprise in store for him that will change his entire life forever.

While cleaning a dressing room in the clothing department, he finds a girl who has fallen asleep.

He knows her very well, as she is the most beautiful, famous and wealthy girl in town.

But she, too, has her problems with an abusive father who tyrannizes over her life.

Spending time together, they discover they have a lot in common, despite their social differences.

After a profound confrontation, they both long to escape from a world where they feel stuck, so they have a brilliant idea.

Indeed, they decide to go to Los Angeles together and make a fresh start.

But once again, this weekend fate has other plans than a romantic getaway.

Suddenly, two criminals break into the supermarket, intending to rob it.

The newlyweds will then have to face this ordeal before they are genuinely free of everything and everyone.

Career Opportunities is practically the only movie of Bryan Gordon, who afterward totally worked on TV series.

I think it was a pity because this director had shown a good talent directing this funny and intelligent rom com.

The pace and quality of the dialogue are remarkable as the pleasant characterization of the places and roles of rural America.

In addition, the two young leads actors are simply outstanding.

Probably all of you already know Jennifer Connelly, a famous protagonist in movies like Alita: Battle Angel or 2003’s Hulk.

But I want to see how many will recognize her co-star, the nice Frank Whaley.

Unfortunately, after that, the actor always had secondary roles, not replicating this performance anymore.

Mainly, we remember his small role in Pulp Fiction with Samuel L. Jackson eating his hamburger before killing him in cold blood.

In this rom com, both of these actors are perfect with chemistry that works like clockwork.

As a result, everyone considers their behavior childish and stupid, not accepting their desire for a different life.

And that’s something we can think about, too, as we spend our weekends sometimes dreaming of the ultimate getaway.

A boy and girl are lifelong best friends, living together since their childhood.

Both of them are going through a difficult time, both financially and personally.

After many years, they meet their old friends at a school reunion on a weekend getaway, finding them all weirder and older.

But then, on second thought, they feel like they have accomplished nothing that matters in life.

Their house is a disaster, and their bills are about to expire, leaving them without electricity, water, and heating.

The plan is to make some money quick and fast, exploiting her momentary notoriety.

Of course, being full of debts, they must demand money from a friend for their little project.

When he realizes that a lot of naked women are involved, he enthusiastically accepts.

Quickly a small crew was born with quirky and sexually uninhibited characters.

The next problem, of course, will be dividing this group into the couples that will have to have sex.

When their turn comes, the two great friends finally decide to make love in front of the camera.

They tell each other that it will be just a matter of business to finish the film and that their friendship will remain exactly as before.

But in the end, it will be difficult to distinguish sex from feelings, which will inevitably complicate their relationship.

Friends, actors and many movies

The director of Dogma and Clerks brings out from this poverty a great abundance of intelligence and humor.

The dialogues are always brilliant and sharp, fearlessly talking about the contradictions of modern America.

Elizabeth Banks and Seth Rogen form a close-knit pair, bouncing jokes and insults relentlessly between them.

Their characters begin as the classic unfinished couple, lifelong friends but never bound by love.

At that point, they can’t go back but only move forward and become an old couple or instead break up forever.

Helping them out is the likable Craig Robinson, equally irrepressible and hilarious with his omnipresent irony.

The actor is one of Rogen’s real closest friends, James Franco, Jay Baruchel, and Jonah Hill, often together in many movies.

Here he plays the producer, putting up the money for the movie and later helping the two friends with their love problem.

In addition, these poor guys face all the issues of small independent production.

In brief, this is one of the best movies for a small weekend getaway from your daily problems.

You can believe me that it’s impossible to get to the conclusion without a satisfied smile with the fauna of this magnificent zoo of comedians.

A famous rom com writer lives in her immense mansion alone, looking for inspiration for her subsequent work.

She is disillusioned with love because her husband has left her for a much younger woman.

Her daughter is now grown and independent and comes and goes from her life erratically.

To compound her situation, she gets involved with a much older man who has a reputation for being a womanizer.

When the man has an illness inside her home, they live together for a few days.

Everyone else goes away, leaving them completely alone except for the young doctor who comes to check on the man’s situation.

And it will be this young man who starts courting the woman, who is surprised and fascinated by the situation.

But at the same time, she will discover that she also has feelings for her initially unwelcome guest.

In his long life, the man has always had superficial relationships with women.

Indeed, his famous bachelor’s history has only short and insignificant relationships.

She begins to believe that she might finally change, while inside her is born the desire to start writing again.

Finally, they who can’t be happy alone might be perfect for each other.

The woman then has to decide the right man for her, between the old womanizer and the young doctor.

A choice that will be the most fun, but also the most difficult, of her entire life.

Love and sex have no age

Nancy Meyers is a good director of comedies, such as What Women Want, discussed previously.

Events happen quickly without boring but leaving a suitable space for each of the characters’ backgrounds.

The heart of this movie is the protagonists’ trio with Diane Keaton, Jack Nicholson, and Keanu Reeves.

Reeves is the young, charming doctor who hunts for the writer whose every work she adores.

Leaving aside his stern face in his recent action movies like John Wick, here he adopts a more romantic and merry tone.

His two older colleagues are just as intriguing and charismatic, playing with each other and amusing spectators.

Diane Keaton draws inspiration from her long career in some beautiful and famous comedies.

We can say that she made a union of the characters played alongside Woody Allen, which had started as an actress a long time ago.

On the other hand, the mad and funny face of Jack Nicholson is enough to make all the work.

His role is only apparently cynical about marriage, and then he realizes the importance of a soul mate who openly challenges him.

In a word, we can say that both of these characters are incomplete and unhappy, but this mandatory weekend without a getaway will change their mind.

The indisputable fact is that their creativity withers and dies without having on the other side who spurs them to do better with love.

If you add a third man as a little spicy, the explosive mixture is ready to be served on your TV screens.

We Need To Talk About Kevin...

Hunter Hunter – The truth about...