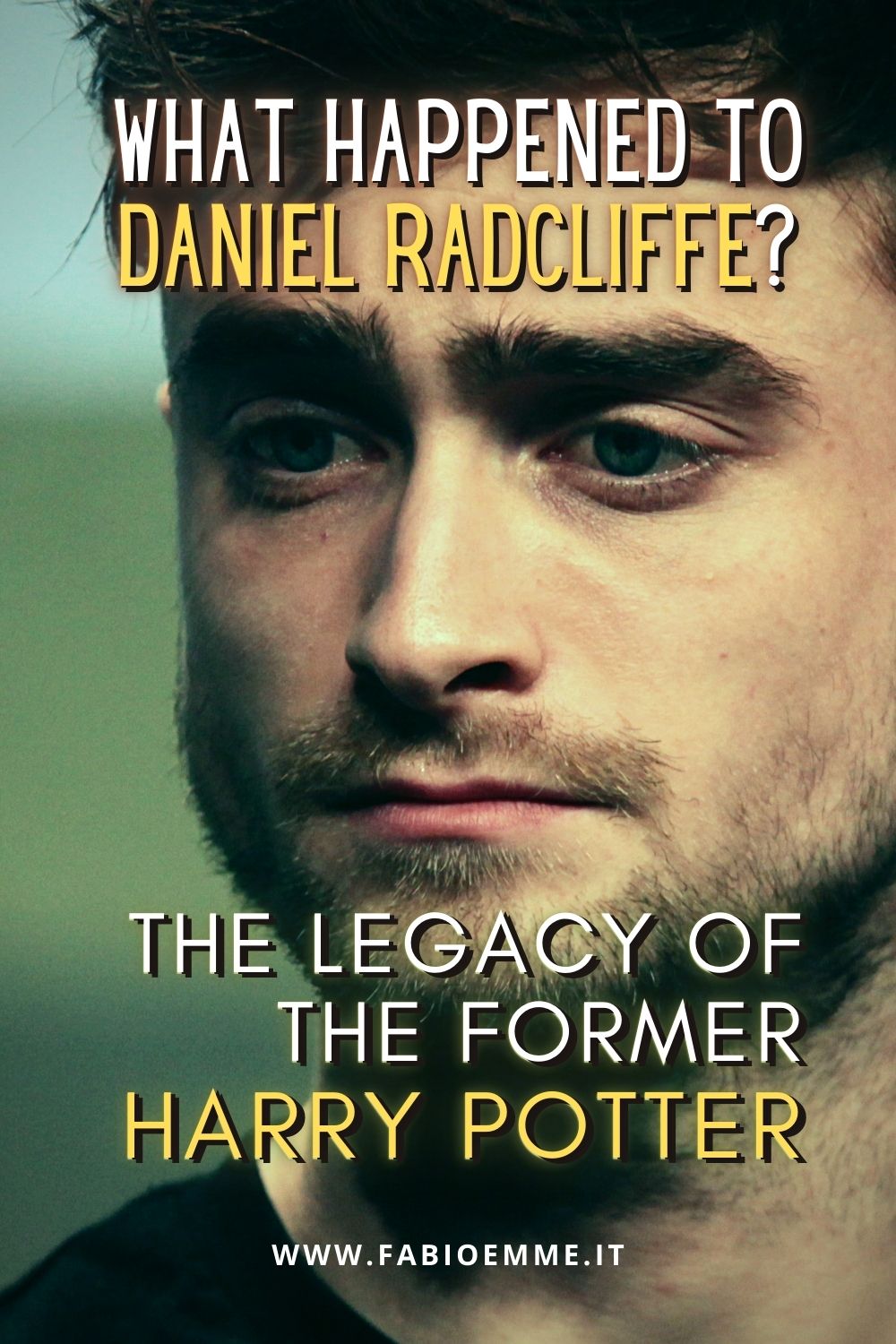 Today it’s been ten years since the last new movies of Harry Potter, the iconic magician whose legacy is the English actor Daniel Radcliffe.

The little orphan made his way between friends and enemies in the magic school of Hogwarts, reaching the natural conclusion of his adventures.

He has also taken place in the heart of all spectators worldwide, immediately becoming a planet star.

After all, the eight episodes of this saga were one of cinema’s most successful series in history.

But after so much fame and glory, what about the still very young Radcliffe? Did he stop acting?

Not at all, indeed once freed of a role now cumbersome after ten years, the actor is put back in play for other ways.

It isn’t easy to give your best in a product for kids, especially in a high-budget production.

Although funny, they always have limits to try to please all fans, especially not prohibiting censorship.

By now, we can say that enough time has passed, so let’s take a look at something new at last.

We have three movies with the dear and older Harry Potter on the shelf, this time without his legacy magic wand.

Three new movies where we can measure to what extent the talent of Daniel Radcliffe.

We begin the rediscovery of Harry Potter through an impossible adventure of human courage and resistance to adversity.

Through one of his last new movies, Daniel Radcliffe plays the incredible epic of Yossi Ghinsberg.

The young Israeli abandons his studies and begins to travel the world, despite the vigorous protests of his family.

He arrives in Bolivia and meets two other young adventurers, a teacher, and a photographer, becoming immediately inseparable companions.

One evening, they stop on their South American tour, meeting a mysterious stranger with an offer they cannot refuse.

He claims to know the most hidden secrets of the Bolivian jungle, fascinating them with the stories of his adventures.

Then he offers them a trip off the map in search of a mysterious tribe believed long gone.

Eager to get away from the usual bland path for tourists, they agree and begin the long pilgrimage.

Unfortunately for them, it will not take long to understand that their guide is nothing more than a miserable charlatan.

Then they separate, and the foreigner brings back the teacher for a nasty feet infection that prevents him from continuing.

The other instead try the crossing to the extreme Amazon areas, rising the insidious rapids of the river.

But their journey ends when the raft crashes on the rocks, and the young Israeli remains alone in the jungle.

Wounded and without reference points, a terrible test of resistance against nature, animals, and its growing madness and loneliness begins.

Welcome to the jungle

Jungle shows another face of Daniel Radcliffe, who moving away from the Harry Potter legacy, has become a mature and complete actor.

He still plays a naive boy trying to finding himself, insecure about his choices, and stubborn in continuing his journey.

The flashbacks show the family conflict for having given up an ordinary family and career life.

Initially happy to have found someone sharing his spirit, he later discovers that he must compromise with them.

When he remains alone, relying only on his forces, fighting day by day, he becomes more animal than man.

Greg Mclean directs a courageous biopic, passionately telling the difficulties of this ordinary boy who falls into extraordinary circumstances.

A test surpasses brilliantly after the terrifying Wolf Creek and the excellent The Belko Experiment we had already discussed previously.

The director does not forget his experience in the genre, inserting horror moments and introspective hallucinations, touching and disturbing at the same time.

Above all, isolating the protagonist from everything reminds us of the omnipotence and indifference of nature towards us.

We tend to forget reality in the relative safety and comfort of our homes, among the thousand comforts of modern civilization.

But there are still many corners of the world out there, still wild and untouched.

And in those, we are still only small and weak monkeys like our Stone Age ancestors.

After three weeks in the jungle, we move to a thriller only within a few hours in an airplane cabin.

A journey that is immediately more complicated than expected, with suspicious traffickers constantly changing the delivery point.

They have reason to suspect, as the pilot is playing them with the DEA agents to frame them all.

What’s more, he must also worry about his wife’s condition, who is at home alone, seriously ill with cancer.

The couple learned of his condition just as they expected a child, shocked by his analysis after a sudden abortion.

Depressed by loss and illness, she does nothing but spending her days in bed drowning the pain between alcohol and medicines.

While he is flying in the dark, he counts the minutes on arrival.

At the same time, the pilot juggles with his exasperating wife, the dangerous traffickers, and the DEA agents.

In the narrow cubicle of his little Cessna, he tries to hold on and cross the border, holding up this dangerous jungle of situations.

But when he suddenly can no longer contact his wife, he immediately realizes that he has a big problem.

At that point, it becomes imperative to complete the last job of his life to save what remains of his family.

Even the longest day comes at sunset

Beast of Burden is a claustrophobic high altitude thriller with its strength for one of the best new movies with Daniel Radcliffe.

Apart from sporadic flashbacks and the frantic final epilogue, the whole thing happens sitting on board his plane.

In front of him, he has a transceiver from which he receives increasingly confused and contradictory instructions from traffickers.

On the other side, there is a cell phone where his wife and the DEA continue calling him without peace.

Let’s talk about a story made almost entirely of dialogues, so the fans of the action at any cost are warned first.

The Swedish director Jesper Ganslandt brings out the best of a low-budget film.

It is an excellent job for a cast mainly composed of unknown faces and names except, of course, our dear ex Harry Potter far away from his innocent legacy.

Despite this, the relationship between husband and wife is far from the lovers’ stereotypes.

Indeed, they don’t always get along between laughter and love.

During the long hours of the trip, the couple continues to fight and realistically make peace, but never dull and stupid.

Just as the reactions to danger and the behavior of the feds and criminals are human, realistic, and never taken for granted.

In short, we mostly have a movie camera inside an airplane, with a tasty turn action in the end to close the curtain.

In conclusion, considering the few means and a script undoubtedly not impeccable, this film manages to excite much more than expected.

After two dramas based on the psychological introspection of the characters, we finally get to a fun action, frantic and crazy.

In this case, Daniel Radcliffe is a humble programmer alternating his anonymous days between home, work, and nothing else.

Spending all the time on the internet, he always follows a program where competitors face each other to the delight of the spectators.

One night, this illegal show boss sends his henchmen to beat and kidnap him because of a social offensive comment.

After nailing two guns with counted bullets to his hands, the madman informs him that he must survive his killers for a whole day.

Leading these psychopaths is a young murderer, the daughter of a famous policeman, the undisputed champion of the show.

But between them begins to develop a perverse relationship of friendship and trust, although she repeatedly tries to kill him.

At that point in the lucid madness of the girl comes the desire to take revenge on her boss.

The young programmer thus finds an unexpected and deadly ally to hope to complete the game still alive.

And for her, too, it could finally be the last chance to find some justice and answers about her miserable life.

From Harry Potter to the depths of the Deep Web legacy

Guns Akimbo is a carousel of social madness for an hour and forty minutes of violence and humor without control.

It is a clear parody of the modern world’s speed and wickedness from the web and social networks.

For once, the keyboard lion who writes safe malice in anonymity has to face-to-face with those he offends.

The action scenes are fun and spectacular, divided into countless clashes between participants in the deadly reality show.

Daniel Radcliffe plays self-irony as never in other movies, slowly becoming a new killer from the shy submissive boy at the beginning.

Carrying guns against his will, he must learn to use his hands again with these weapons graft surgically to him.

The result is a whirlwind of misunderstandings and hilarious subterfuges, alternating with sequences of shootings and fights to the death.

We can only say that the actress confirms in a great rehearsal.

After having already spoken about her role in the magnificent Ready or Not and Mayhem, where she’s gorgeous and funny.

Finally, let’s give a big round of applause to Jason Lei Howden, author of that other horror metal-rock pearl that was Deathgasm.

The young director continues with his irreverent and destructive style.

And God only knows how much we need such a voice, especially in times of forcibly unique political thought.

The cover photo was taken and edited from the original on Wikimedia.org