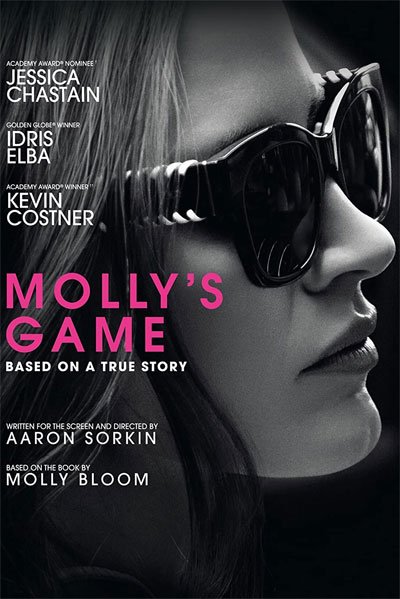 Molly’s Game is a movie with Jessica Chastain about the true story of Molly Bloom, a young woman who became the poker queen in New York with her resourcefulness.

It comes from a fascinating, successful book that she wrote in her trial’s long and difficult years.

Despite being almost without money, she doesn’t earn enough because she leaves her regular clients’ essential names.

After the arrest in an extensive criminal round-up, she narrates her life’s crucial episodes to her lawyer.

Her story starts from her youth’s promising sporting career that ends prematurely due to an unfortunate injury.

After moving to Los Angeles, she takes her first steps in the underground poker world.

Indeed, patiently, day after day, she learns how to create and run an illegal gambling hall for famous movie stars.

But one day, her boss betrays her getting all the business and skillfully kicking her out without clients.

Having to start from scratch, she chooses New York as the foundation of the new empire she intends to build.

She recruits some women who know poker well and pushes on extremely high expensive evening games.

Despite the success, it soon becomes clear that her refusal to use force to collect debts is a problem.

To maintain sufficient money to cover the game, she has no choice but to cash a percentage on the bets.

Finally, when some criminals infiltrate her circle, it’s only a matter of time before her entire empire falls apart.

Poker is not just a game

Molly’s Game lives with the charming interpretation of Jessica Chastain, one of the best actresses of this generation.

By playing the tough and independent Molly Bloom she shows her amazing skills with a rare emotional intensity.

With her beauty and fancy style, the actress performs a perfect combination of elegance, class, and stubborn intelligence.

She is a proud woman, strong and sensitive at the same time, who made her way into a universe dominated by dangerous and unscrupulous men.

Even federal agents seem to underestimate her, assuming she’s only lucky enough to have a nice face and a sexy body.

Idris Elba is evenly fabulous in his role as a lawyer, who initially distrusts the famous queen of poker like everyone else.

But when the woman refuses to reveal the details and private indiscretions of her clients, he changes his mind and begins to admire her.

Indeed, despite having violated the law, she has a moral code and ethics that distinguish her widely from the criminals of this clandestine world.

The best quality of this movie is exactly that, the ambiguity of this character, that we inevitably like despite her illegal business.

Finally, the fierce Kevin Costner is her equally tough, obstinate father with whom she has had a conflict since childhood.

In this role, the actor has few scenes, but he is equally impressive with his usual talent and charisma.

Aaron Sorkin writes and directs this biopic based on one of the recent years’ most interesting true stories.

An intriguing movie that I recommend to all of you, men and women, whether you’re a poker fan or not.