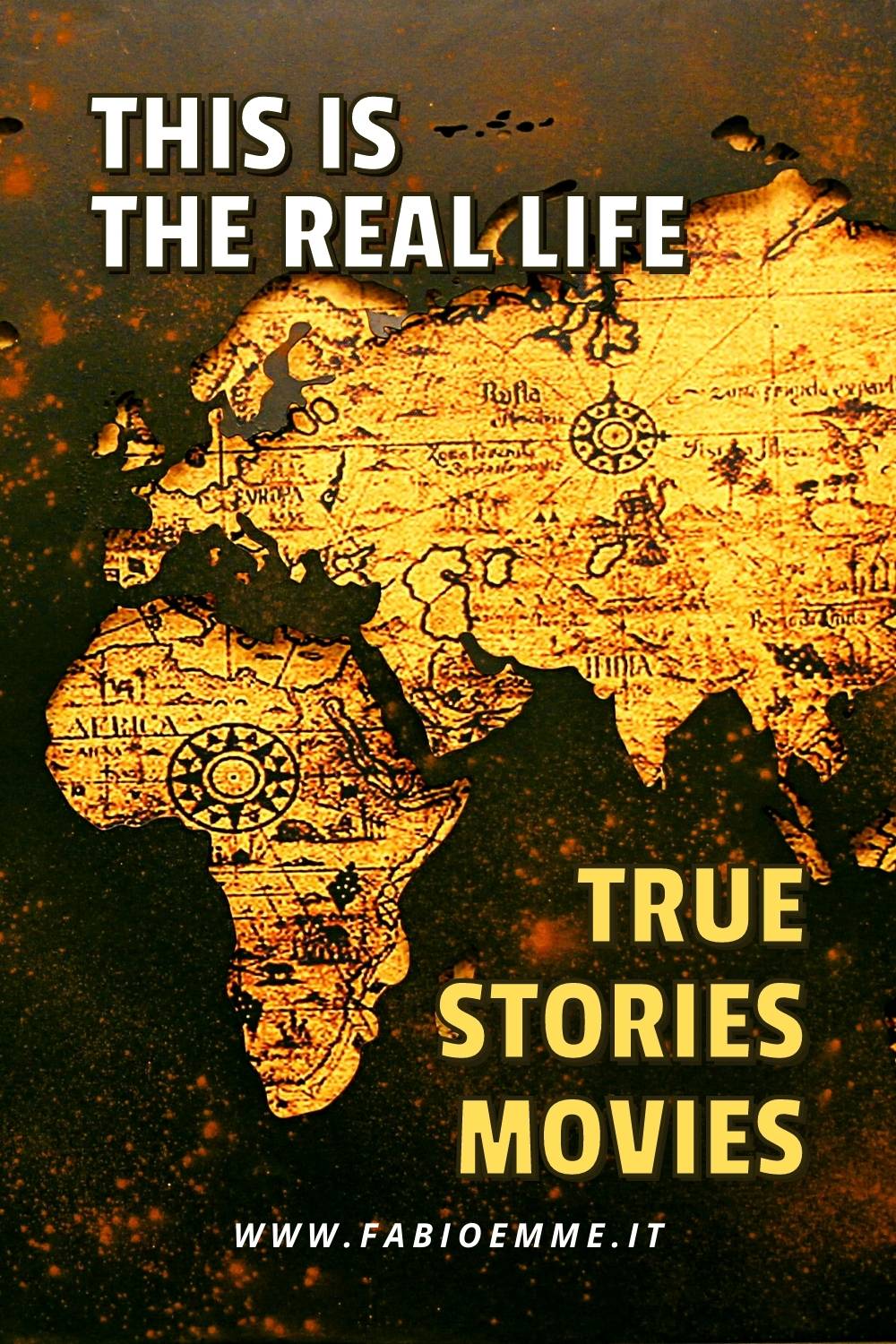 Sometimes real life makes its own way in the movies, bringing a true story out of the real world and into the dream machine cinema’s list.

Obviously, the camera inevitably deforming the truth somehow, but this is not necessarily a problem.

What really matters is to highlight the soul of the facts and protagonists, even if in a historically questionable way.

On the other hand, if you are looking for reality, there are documentaries whose task is to report the news faithfully and understandably.

The cinema must move as it tells, expressing an opinion on what happened through the director’s vision, which will always inevitably be biased.

And today, we’re going to see three movies born from real life becoming art in motion of the highest level.

We have a horror, a sports film, and an adventurous historical epic not to miss anything.

Given today’s menu, then, let’s go deeper into these stories and know the lives of these extraordinary characters.

The young and beautiful secretary of an agency robs a client of 40,000 dollars and flees the city.

Paranoid at the thought that the police are on his trail, the girl stops in a hotel not far from the highway.

But unfortunately, during the night, someone assaults her in the shower, killing her brutally with stab wounds.

After a few days, not hearing from her, the sister goes to the city to her lover, asking for explanations.

A private detective is also looking for you, hired by the agency to recover the money without involving the police.

The man can trace the hotel where the girl had stayed, and then mysteriously disappear him too.

Then the sister and the lover go to the same place to investigate personally.

The owner suspicious them with vague and evasive answers, both about the girl and the missing investigator.

But the old mother who lives in the ruined house behind the hotel could be involved in this whole story.

At that point, the two of them have to try to talk to her to shed light on a hideous and unspeakable truth.

Every serial killer is beautiful to his mother

Perhaps not everyone knows it, but a true story inspires the horror masterpiece of Alfred Hitchcock.

Indeed, the Psycho madman was born in the real world from the life of a Wisconsin serial killer, Ed Gein.

After the death of his mother and the murder of his brother, he finally goes crazy for good.

As discovered below, between the years 40 and 50, this maniac was responsible for the disappearance of countless people.

The book went on for a long time among the Hollywood producers, who rejected it in mass horrified.

But the genius Hitchcock saw the potential to make a film very different from his previous masterpieces finally.

He recruits Anthony Perkins and the already famous Janet Leigh as protagonists by committing his house to produce it.

The actress was back from the immense success of Touch of Evil, directed and interpreted by another master of cinema as Orson Welles.

Another hard fight was then with the harsh censorship rules.

At the time, they try to deny permission, horrified by the murder, incest, and transvestitism book’s arguments.

But overcoming these obstacles and resisting immensely rewarded the English director and his beloved wife and colleague Alma Reville.

At the end of the day, the film that no producer wanted to produce turned out to be Alfred Hitchcock.

And personally, money aside, I consider this story one of the most important and true original horror movies in the cinema history list.

Changing topic but still in the real world, let’s look closely at this story inspired by the real life of Rocco Barbella.

Those who frown doubtfully may know this character with his stage name, that of the boxer Rocky Graziano.

An epic sports redemption, starting from a difficult childhood with a low-income family in the East Side of New York.

And in the world’s largest metropolis, you often have no chance if you are born and grow up in the wrong neighborhood.

Rocco soon becomes a brawler braggart among an alcoholic father and a clique of criminal and violent friends.

His days are inevitably made of fights and petty thefts, making him end up in juvie very early.

Then, the step is short from the juvenile detention center to the actual jail once it becomes bigger and worse.

Once out, finding work as a former convict is impossible, so the boy tries to enlist.

It’s right in the barracks that an officer realizes his boxing talent and helps him take his first steps in the ring.

In this sport, Graziano can finally demonstrate his strength and courage.

At that point, in fact, he starts an epic climb up to the match for the world title.

But before the glory, he must know the defeat and then get back on his feet for the final revenge.

The true story of a poor Italian-American boy

Robert Wise sculpts another cinema milestone, adding another diamond to his brilliant filmography.

In his true masterpieces movies, the director has list stories as the musical West Side Story, the science fiction Star Trek or the magnificent horror of the ’40s, The Body Snatcher.

Changing genre again, this time it turns to the sports biographer, which he never addressed before.

Paul Newman gets the lead role for bad luck after the road tragedy of James Dean, initially the original protagonist.

The actor looms with an extraordinary test, crazy and funny but just as human in his weakness and ingenuity.

His Italian speech is simply irresistible, and his ways as a bully are seemingly bad but actually the heart of gold.

The Wise direction is perfect in staging and montage, choosing an amazing rhythm to narrate this true story.

Rocky’s years’ story passes like a locomotive, where each wagon represents a defeat before starting his boxer career.

A character who embodies the life hopes of each of us, which often must break against the evil indifference of the real world.

And for once, we all rejoice at the boy who succeeds in escaping the mud and marking the sport’s history.

After the real life of a great Italian-American athlete, let’s see two of the most important figures in world history.

These two brothers originated one of the greatest empires the world has ever seen with glory and tragedy.

Rome’s legacy begins with the humble life of these peasants who lose everything when the river overflows, overwhelming their flock.

Escaping death by miracle, they are captured and enslaved by a clan of brutal warriors.

Having to fight each other for the fun of their new masters, the brothers’ rebel and flee together with all the other prisoners.

This primordial rabble of slaves becomes their first tribe of which they immediately take command.

Then the group widens again, making an assault on a small village where he commands a mysterious witch guess.

The woman predicts the glorious future that will fall to one of the brothers but only after the death of the other.

At that point, the real rupture between the two begins, but the seed of the history of Rome is now on the point of sprouting.

As their tribe waits to figure out who their new king will be, Romulus and Remus are led by destiny into an inevitable mortal duel.

Matteo Rovere directs an excellent historical film, exciting and engaging as we have not seen in years.

For once, an Italian production put this true story movie on the same list as many renowned international quality producers.

Obviously, to excite the public, they openly romancing a little real history in an adventurous way.

But the historical real life rigor in the language, clothes, and customs of the time remains of the highest level.

Just as the numerous fights are choreographed intelligently to be, with balance, both spectacular and credible.

Two initially humble men who conquer strength and power become just the evil tyranny they fought at the beginning.

The film is almost entirely set in the Tiber’s forests, made of shots perpetually suspended between darkness and light.

An inner conflict reflects the outside, transporting us into an almost fantasy world where killing is the only law that matters.

And in the end, as in all births of an empire, it is always the old maxim that power corrupts and destroys everything it touches.

We applaud the work of Rovere, one of the best talents around, hoping that other producers will follow the path to a rebirth of Italian cinema.