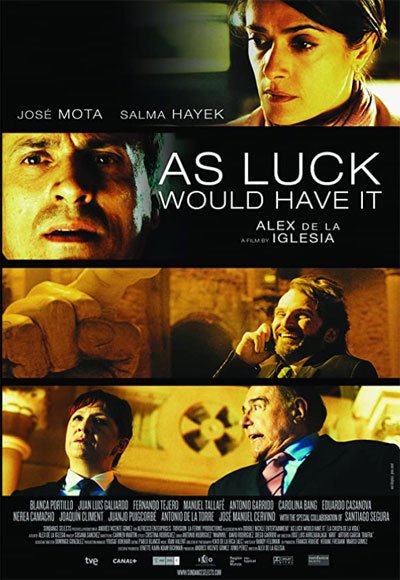 As Luck Would Have It is one of the best film examples of the worst habit of capitalism and mass media today world.

A commercial creator goes to Madrid to see an old friend, hoping to find a job in vain.

Indeed, the man has had a brilliant start to his career with a famous and successful claim, but he is falling into ruin in recent years.

His professional crisis reflects on his family, ruining his relationship with his wife and children.

Once he arrives in town, he goes to where he spent the initial marriage happy days to lift his spirits.

But tragically, he falls and remains seriously injured in the center of a construction site under construction.

When help arrives, they immediately realize that they cannot move him at all.

After the fall, a metal bar stabs his chest, and moving him would seriously risk death.

Meanwhile, around the accident scene, start a circus of mass media competing for the best images to show as his suffering examples.

The yard managers pretend anxiety and worry, but only to hide their responsibility and avoid that the man denounces them.

His only hope is the wife, who immediately hurries to protect him from this handful of jackals.

At that point, absurdly, reporters begin to promise her money and fame in exchange for exclusive coverage.

The only thing she has to do in return is let the cameras take her husband’s death.

The show must go on

As Luck Would Have It is a film perfect blending of comedy and human tragedy.

It is a perfect mirror of ruthless modern times, with a dying man has to choose between humiliation and greed.

In reality, he only wants to work drawing, but his talent is only for advertising in the business world.

The man wants to live, but loving his family does not mean leaving them without a father and money.

Therefore, his dilemma is whether to get out of that story alive but poor or give an inheritance to his children with whom they can overcome the trauma.

The competition to film his death is as funny and exhilarating as it is sadly realistic and unscrupulous.

As the victim bleeds out slowly and painfully, the various TV news operators fight a sponsor’s war.

To achieve the best possible deal, they are ready for anything, including lying and cheating anyone.

The museum director where the accident occurs is just as vile and fun, denying relentlessly any responsibility.

This movie intelligently criticizes our world, politics, and journalists, speaking directly about the terrible economic crisis.

But in the end, this story also leaves us a glimmer of humanity’ with the young journalist who follows his conscience, unlike his colleagues.

Classical and post-modern parody from the heart of Spain

Álex de la Iglesia is an ultra fifty-year-old director who has already made many movies of different genres, always in an original and captivating way.

His style is fast and fun, preferring to entertain the viewer but without being stupid.

On the contrary, his exaggerated parodies and metaphors are the best means of pushing anyone to reflect on the paradoxes and contradictions of reality.

As a protagonist, in this case, he chooses an unknown actor like José Mota, famous mainly for his comic roles.

His anonymous face but friendly and intelligent is perfect for helping us identify with his situation.

Watching him closely for the hour and a half of the movie’s duration is impossible for us not to think about our own lives.

Our childhood dreams and desires re-emerge and join his drama and need of the other accept him despite the failure.

When Salma Hayek arrives on the screen, it is as if an angel suddenly descended into a hell of microphones and cameras.

The sweet and cheerful Mexican actress plays a different role than the usual stereotype of a sexy Latina woman.

Here she is an example of maternal understanding, innocent among the evil mass media news predators surrounding her.

And when we get to the end, she and her children seem to us to be the only real human beings left in this world.

As Luck Would Have It is one of the best European films of recent years period.

If you have not seen it yet, do a favor to your conscience and find it immediately repairing the damage.