Freaky – How much would it be fun to swap your body with a serial killer? 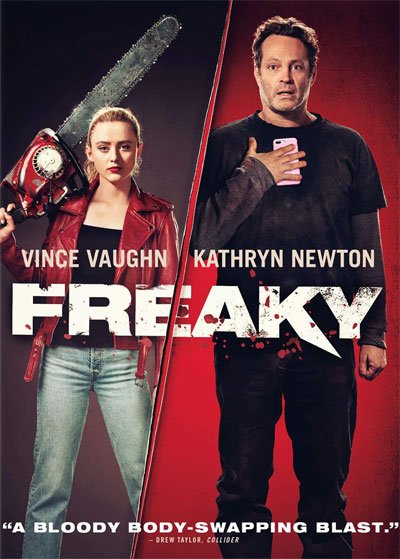 Freaky is a 2020 horror comedy movie with a scary and funny body swap between a blondie teenager and a ferocious serial killer.

After her father’s tragic death one year ago, the girl was already sadly unhappy before the magic shift.

Indeed, she lives with an alcoholic mother and a cold and indifferent sister, a local city police officer.

Her situation is no better at school, with some naughty bullies bothering her and a teacher constantly harassing her.

Every day she sits next to a handsome guy she is in love with without finding the courage to confess.

But everything changes the night a maniac tries to kill her without succeeding.

Everyone in the city knows about the serial killer murders that someone considers a local urban legend.

The latest massacre of boys in the villa of a wealthy family would be a big mistake for him.

Before leaving, he stoles an ancient knife from the precious collection of rare pieces of the wealthy victim’s father.

But he doesn’t know the artifact’s real power, only discovers it when he tries to kill the girl.

Wounding simultaneously with the knife, they will both wake up one in the body of the other the following day.

At that point, the young blonde, together with her dearest friends, will have to try in every way to stop him and return to her flesh.

Freaky is one of those movies combining horror and comedy without too much thought for an evening of pure entertainment.

However, despite the endless fun, the murders are made with good wickedness.

Being a story for kids, it not descends too much into the bloody splatter.

A series of reference characters mock the American family and school system with the body swap plot idea.

So there’s the trusty gay and the black friends of the blonde protagonist and the drunk but ultimately good mother.

Inevitable then, as usual in a teenager horror story, there are a series of bullies all destined to end badly.

The story pushes hard on classic horror school stereotypes, including the rhythm and cadence of the various murders.

But luckily, it moderates everything with a good dose of self-irony, including the serial killer’s Slasher jokes after each kill.

Perhaps it could provide some more information about the magic knife origin.

Since it is the plot’s real turning point, It would have been interesting to know its story better.

But after all, it is useless to expect too much from what, we repeat, is still a diversion of entertainment that does its job more than dignified.

An actor perhaps too underrated?

Vince Vaughn is an actor who has always been used mainly in a humorous way, supporting other actors such as Ben Stiller and Adam Sandler.

Recently, however, we have seen him in more severe and harsh roles as the violent prisoner of Brawl in Cell Block 99 and the corrupt policeman of Dragged Across Concrete.

These two roles made us see the pleasant face of the good guy in another light, highlighting a capacity of acting he rarely expressed before.

Indeed, let’s not forget, especially his leading role in the delightful remake of Psycho by Gus Van Sant.

The warm tribute to Alfred Hitchcock’s masterpiece, from 1998 to today, unfortunately, remained an isolated case for this actor.

Going back to this movie, we can say that Vaughn plays halfway’ between his classic comedy roles and this different key more bad and dramatic.

The psychopathic expression in his eyes is very effective, together with his acting off automaton without remorse and emotions.

The beautiful and young Kathryn Newton is equally good when, after the body swap, she becomes the death machine.

The director Christopher Landon is wise to use his candid and innocent face to massacre students and teachers without pity.

Indeed, she also is threatening with her red jacket and her fixed and psychopathic expression, adding a sexy touch to the murderous fury of the serial killer.

In conclusion, I think I can recommend Freaky as a movie for a family evening with your children.

For once, you can have fun with horror without traumatizing the little ones with excessive violence since you can joke and laugh a lot, even during the various murder scenes.

Bound To Vengeance – A Lonely...