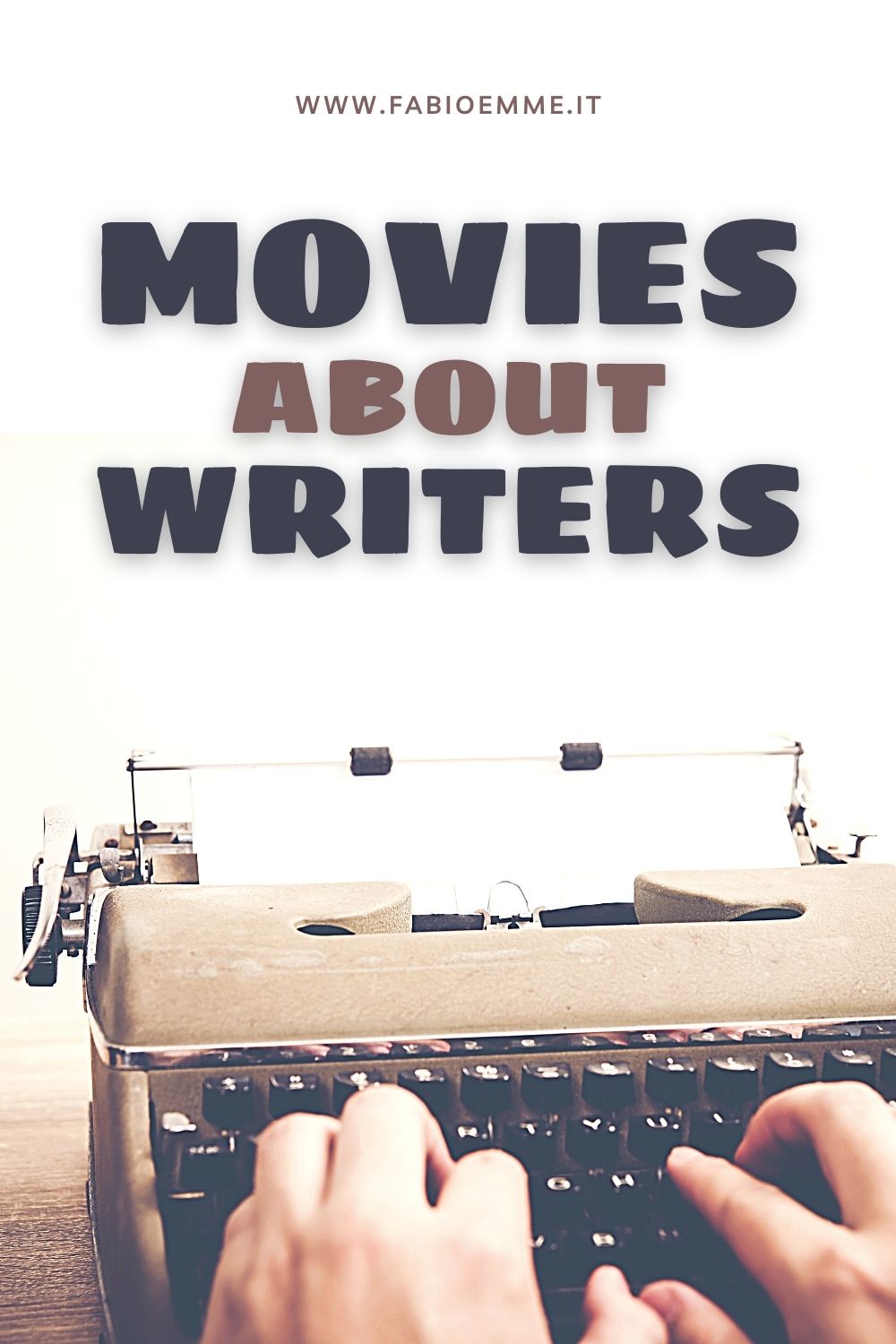 Movies about Writers is when literature and writing books become the beating heart of a story.

Each author starts writing from what he knows best, and his personal life inevitably ends up flowing into his stories.

He reconstructs childhood dreams, and nightmares are reconstructed through the imagination,

Each novel narrates how he learns to write, becoming the cardinal rules of his fantasy worlds.

The writer tells us about the difficulties he faced and managed to succeed, showing us how to follow his example.

Like Sean Connery said in Finding Forrester, that was another amazing movie about writers and writing books; the key to writing is writing.

It is not by chance that the great Stephen King writes two of these books, and the other writer’s character is a caricature of him.

So let’s lick our thumbs and get ready to scroll one page after another.

These magnificent combinations of movies and literature deserve all our attention.

One of the most famous and beloved best-selling authors in the world suddenly disappears.

On the eve of the launch of his latest horror novel, his editor hires a private detective to find him.

The man accepts the assignment with a reserve of cynicism, convinced it is simply a publicity stunt.

But strange events begin to make him suspect that a supernatural presence controls every move he does.

Resolving clues in various book covers, the detective finds the city where the author could hide.

So he sets off with a young assistant of the publishing house, another horror literature, and movie fan.

Their mission is simple: bring back the horror guru or at least recover his latest novel.

But every step towards the truth plunges them into hell without going back.

Reality and fiction become indistinguishable while the world quickly slips under the rule of the monsters.

The power and magic of art and creation

John Carpenter paints with his artistic brushstrokes the supreme masterpiece of his career.

After the absolute cults Escape from New York, Halloween e The thing he reaches the peak with this inimitable fusion of literature and cinema.

Obviously, it was a specific author to inspire the devilish writer everyone search for in this movie.

He is Stephen King, one of the best writers alive from which horror literature books born unforgettable movies by the most important directors of his generation.

And, talking about his writing books career, we must quote Christine, which Carpenter directed 10 years earlier.

In The Mouth Of Madness makes the writer into an omnipotent deity of the Lovecraftian level.

He draws power writing books as many fanatics believe in him and transforms them into blood-thirsty subhuman monsters.

He shapes the world, putting these monsters at the top of the evolutionary chain, over the already dying human race.

As the magnificent protagonist Sam Neill, even him going mad, says in the asylum where they lock him up:

the human race will just be a bedtime story for their children.

The actor overcomes in an outstanding interpretation, smart and crazy at the same time.

We love further the funny cameo of Charlton Heston as the rude editor-in-chief, sadly in one of his last appearances.

Summing up, we are simply in front of one of the best horror films in cinema history like never before.

All things considered, the real monstrosity would be not to have seen one of the best movies about writing books.

Let’s now talk about one of the many writing talent Stephen King books transposed into a horror movie.

The protagonist is a writer affected by the terrible white page syndrome.

After publishing numerous novels and collections of successful stories, man no longer has a decent idea to write for years.

Like his career, even his life has gone to ruin with a marriage that ended in a thousand pieces.

The wife asks him for years to sign the divorce papers, but he refuses to accept reality.

To complete his nervous breakdown, one day, another aspiring writer knocks on his door.

He’s a rough and violent peasant who accuses him of copying and publishing one of his stories.

Worse still, to make the stranger further angry, he ruined and changed his book ending.

Between them start a struggle that soon becomes violent with constant threats and aggressions.

Since then, he must fight not only to defend his work but even his own life.

A story worth killing for

Secret Window is one of the evilest writers’ movies about a contending degenerating and escalating quickly in a deathly game.

Their world is into darkness and perdition, and for them, writing books represents a black hole without return.

A work he has done, even better in the intriguing Stir of echoes, another amazing horror that I recommended to you recently.

A mastery of cinema skills was exalted by two great protagonists like Johnny Depp and John Turturro.

This movie plays two extremely opposite writers: a successful and respected author and a poor peasant ignorant and aggressive.

Unfortunately, the authorship of a silly novel makes them enemies and unshakable in their point of honor.

Their private war will involve everyone else, including Maria Bello as the wife and her new man Timothy Hutton.

Tension grows quickly and exponentially until the terrifying ending, evil as the final nail on the lid of a coffin.

The movie unveils itself one piece at a time slowly and in an exciting way, like a literature piece of art.

Measuring the revelations at the right point, the various twists and turns are marked as a stopwatch.

In conclusion, I passionately recommend this less-known Stephen King book, perhaps obscured in time by more famous films like Shining or Carrie.

Finally, we reached what we can define as the dream team of the world of horror and about movies about literature and writing books.

At the direction, we have the modern zombies father, George A. Romero, directing one of the best movies by Stephen King stories.

In this case, the protagonist is an extremely successful writer working behind a fake pseudonym for years.

When a dirty blackmailer discovers his secret, the man finally decides to abandon his alter ego, burying it forever.

But this dark side has no intention of being pushed aside.

Becoming a separate entity from the writer, the being goes mad and swears to kills all his friends, colleagues, and relatives.

Trying to accept reality and remember the past, the writer has no choice but to become aware of the real monster’s nature.

In fact, his dark side was with him long before he started to be a novelist, and now he has returned to stay and take his place.

The inevitable face-to-face final will bend the laws and humans on the fluttering sound of the bewitched birds that the two men continuously hear everywhere.

The tragic end of a cursed film

The Dark Half is one of the most unlucky films ever made that almost marked the end of Romero.

There are very few of us to defend it, while the rest of the world’s critics have always branded it one of the director’s greatest failures.

Obviously, I will not try to deny the imperfections of the montage and the narration, but we must also give the film all the mitigating factors it deserves.

The production company sank into bankruptcy before its conclusion, and the new investors foolishly took Romero the last word on realization.

The result is a story told imperfectly but far from deserving the contempt that its detractors love to vomit on it.

Timothy Hutton returns this time as an absolute protagonist in the double role of the protagonist and his relentless and unstoppable shadow.

Unlike many other writers’ movies, this story, moreover, follows in a fantasy way more about Stephen King’s life than his books.

Precisely, it reflects the moment when he decided to abandon the pseudonym of Richard Bachman.

A name under which he wrote some of his best and original books, without the need to insert even a breath of supernatural.

Glacial thrillers like Obsession or Hell exit and two big futuristic dystopias like The long march and The man on the run.

So let’s all be more tolerant in this digital world of serial haters at work 24 hours a day.

We credit King and Romero for doing their best in the worst possible conditions and enjoy a movie that remains a decent and fun horror.

Freaky – How much would it be fun to swap your body with a serial killer?

Coherence – A Journey In The...