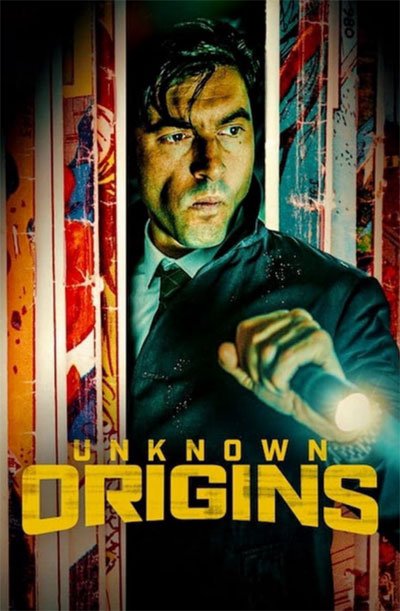 Unknown Origins is a horror/thriller movie with a comics fans’ serial killer available on Netflix from 2020.

The story begins with a young man who moves to Madrid after a police inspector’s promotion.

Shortly after his arrival, a series of strange and inexplicable crimes immediately begin.

The only thing we know for sure is that the mysterious murderer saddens the victims by torturing them for a long time before killing them.

The case seems unresolved when one of his retired colleagues notices something that others had missed.

Indeed, near a corpse, he finds the torn page of a rare edition of a famous comic book.

Reviewing the murder, the inspector discovers that death is very similar to the genesis of a famous superhero.

So he begins to investigate in this direction with the help of the son of his colleague, the young owner of a comic shop.

The two men have profoundly different characters, and passions and their coexistence is not easy.

The police chief, a woman who dresses up like these fictional characters, further worsen their relationship

But the killer is even crazier than they imagine, and his ultimate goal is precisely the young inspector.

Even nerds can be very violent

Unknown Origins is a movie with a double soul: on the one hand, it is violent and brutal, and on the other, it is childish and humorous.

Incredibly this paradox works perfectly and gives the story an appealing tone, both entertaining and dramatic.

The murders are incredibly sadistic with shocking horror moments and have powerful visual violence in torture.

But the naive stupidity of the characters always comes on time with a bit of comedy, giving relief to the viewer.

The alternation of the two genres works excellent. Action constantly switches in funny moments between the inspector and his boss, including a hint of romance.

As for the comics lovers, they will undoubtedly find plenty of quotes from their favorite movie heroes.

These references are constant and not limited only to crimes, but you can find them at every moment of history.

We find many ideas that propose heroes like Batman, Iron Man, Hulk, and many others in a funny and fanciful way.

To summarize, it is a pleasant distraction for lovers of Marvel and DC Comics sagas who will love this tribute to their favorite characters.

From Spain with horror and fun

With the excuse of the serial killer, this title Netflix of 2020 describes the world of fanboys and cosplays.

Fans of this genre are like children, naive and in ecstasy for superpowers and colorful costumes.

It is a passion that we can all understand. I mean, let’s be honest here.

Everyone in his childhood (and not only) dreamed of a new life with a secret identity and fighting for justice.

The main character of the inspector is Javier Rey, a young policeman who finds this world of fiction stupid.

However, the young cynic changes his mind with the fat and friendly Brays Efe, an omniscient comics seller.

On the contrary, he has a different feeling towards the police because of a brother who died young in the act of heroism.

Between the two characters then comes the sexy and funny Verónica Echegui, a fierce and tough cop with a cosplay fetish.

The woman gets immediately excited about the case, given her theme of involving the severe and imperturbable inspector.

In conclusion, Unknown Origins is a lovely portrait of the superhero ecosystem that will put a smile on your lips.

If you have Netflix and you love comics or even just a bit of exceptional thrillers, you can not lose it for any reason.