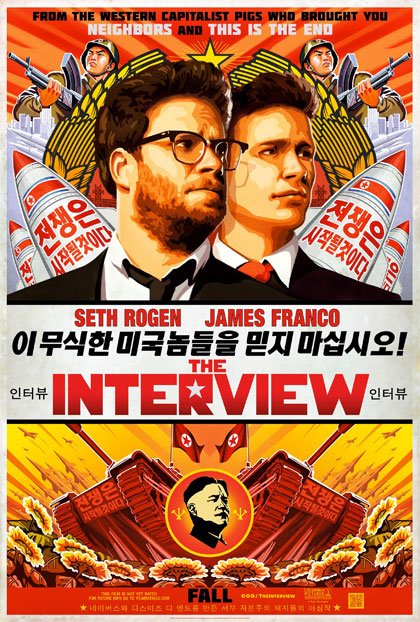 The Interview is a 2014 movie joking about the USA and NORTH KOREA controversy with the hilarious comic couple Seth Rogen and James Franco.

The two friends and actors play the host and the writer of a famous American TV talk show.

Despite their success and fame, they would like to try something more serious and challenging than the usual celebrity interviews.

Friends and colleagues discouraged them, considering only men of entertainment.

When suddenly, it comes the most unthinkable of opportunities from the most unlikely of places.

The North Korean military officers inform them that President Kim Jong-un would like to be part of their show.

Obviously, the American government is also highly interested in this interview and contacts them on a spy mission.

Indeed, they will access the impenetrable enemy defensive wall where even CIA agents have never arrived.

The two friends can’t refuse this unrepeatable offer, so they set off for the North Korean capital, Pyongyang.

But they soon discover the president will manipulate to show a good image of his dictatorship to the world public.

Completely alone and surrounded by the enemy, the showmen will have to organize the most fantastic show of their career.

The interview is a movie full of hilarious sketches that may not suit children, surely amuse adults with controversy.

All comic situations arise from the cultural difference with Korea, and between the protagonists, as the actual plot engine.

While being great friends, their different cultures, intelligence, and ambition generate continuous friction between them.

Seth Rogen is the one who would like to be more severe, and James Franco, instead, doesn’t care if not for ratings and popularity.

Equally good is Randall Park in the problematic role of Kim Jong-un, a living idol and icon of the Korean people.

Obviously, his character is the movie’s villain, but he manages to be equally funny in some unforgettable scenes.

Above all, definitely, the moment when he drives at full speed a tank to the rhythm of the music of Katy Perry, of which he says to be a big fan.

In conclusion, it is one of the most hilarious and irreverent American comedies of recent years that did not deserve the controversies that followed.

Later, a simple entertainment cinema of joy and hilarity became an international case of diplomatic protest.

The Korean government did not like how it described their nation, politics and mocked the president.

Even a group of hackers carries out a cyberattack threatening further retaliation against Columbia Pictures if they released the movie.

It was a sad and reprehensible episode with threats to the American people and terrorist acts in cinemas.

Seth Rogen and James Franco avoided promoting the movie to not cause incidents because of some fanatics.

In short, it was a rather pathetic attempt by the North Korean government not to appear monarchical, which had precisely the opposite effect.

All this controversy may explain the box office flop, without which The interview would otherwise have been a more successful movie.

Nevertheless, today we can all enjoy it without problems, watching it for what should be simple entertainment with which to have fun.

But maybe it’s too offensive for a dictator who won’t admit that someone innocently jokes about him.