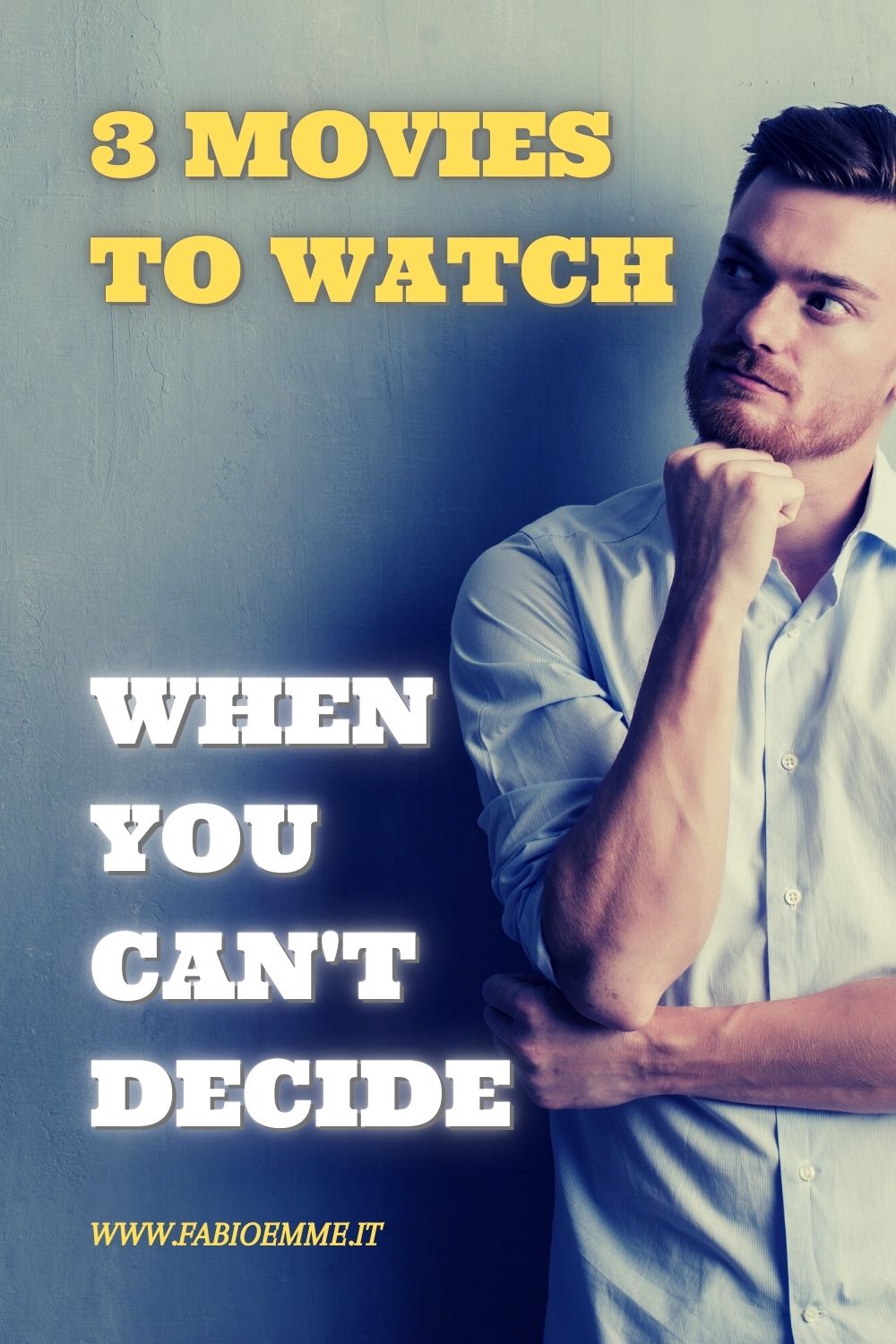 I want to watch something tonight… but there are too many movies out there, I can’t decide!

How many times have we thought this, maybe coming home after a long day of work?

Social media and TV trailers overwhelm us with advice so much that we don’t know what to choose.

And since there are already too many tips around… let me give you another pair!

Bad that it goes, you will add them to the pile of those movies that maybe one day you will see.

And believe me… there is no problem, and these movies will still be valid in ten years… I guarantee it.

So ‘now enough with the chatter and get to the heart of the advice… have good entertainment, I’m sure you deserve it!

A scammer lives in his small town pretending to be a medium capable of cast out troublesome spirits.

He can see the ghosts, but they are his accomplices haunting places to clean after payment.

Until a series of sudden deaths from heart attacks happens to people who were in perfect health.

The boy believes that behind these deaths hides an evil spirit, repeatedly seeing a figure hooded with a sickle.

He begins to investigate with his trusty ghost friends and the young girlfriend of one of the last victims.

What awaits him will be the most challenging supernatural trial of his entire life.

Indeed, the culprit is the spirit of a serial killer who had bloodied the city many years before.

The infamous episode had been a series of senseless murders to establish a killing record within an old hospital.

The killer marked the forehead of each of his victims with a number like they were trophies.

Thanks to his powers, the protagonist sees that number, knowing first who will be’ next rather.

Finally, to stop his supernatural madness, the duel with this demon escaped from the underworld is inevitable.

But this fight will also bring to light many buried truths maybe he didn’t want to know.

Ghosts, ghostbusters and lots of action and laughter

The Frighteners is a rocky and funny ghost movie directed by Peter Jackson, starring the amiable Michael J. Fox.

The actor we all remember for Back to the future plays a funny exorcist and cheater from the sad past.

In the city, everyone considers him an outsider without a family, but in the end, he will be his own despite having to be the hero.

The famous face of Re-animator movies, Jeffrey Combs, is just as hilarious as the insane FBI agent.

He should be a lawman but, almost unintentionally, obstructs the protagonist with his arrogant stupidity.

It is a story joining in a fantastic way horror and comedy, action and mystery, with a little bit of juicy romance.

Despite being more than twenty years old, the special effects are still excellent, combining the world of the dead to that of the living in an indistinguishable way.

It is no coincidence that there is a cinematographic genius behind the production like Robert Zemeckis, a great pioneer of digital technology.

The director at the time was producing his big success Forrest Gump, but enthusiastically supported the making of this movie.

But Jackson is no less a director, moving on to the famous saga of The Lord of the Rings.

In brief, this is the ideal movie when you can’t decide what to watch, with a little bit of everything to make your evening happier.

Kung Fu Hustle begins in the old China of the gangsters when the ancient martial arts masters are now gone.

The new criminals gather in the fearsome Axe Gang, slaughtering them without mercy and conquering the power.

The few kung fu survivors must hide in the impoverished neighborhoods, places that aren’t worth robbing.

Neighborhoods like was the Pigsty Alley, where two stragglers in search of fortune unleash the murderous rampage of violent Axe henchmen.

To protect the defenseless inhabitants of the dilapidated council houses, some masters return to fight.

Their reappearance will lead to an escalation of violence and retaliation, bringing death on both fronts.

To defend his honor and leadership, the crime boss will, in turn, engage other martial arts masters to protect themselves.

The two drifters and idlers, cause of all the chaos, will, unfortunately, find themselves at the center of this war.

Finally, the most dangerous and crazy kung fu fighter escapes from a mental institute to join the war.

At that point, there will be the final devastating battle where the masters will exhibit all their strength.

Once upon a time… fight was fun

Kung Fu Hustle is practically an oriental animation comic made in live-action with real actors.

Rowdy and humorous, it is also dramatic and spectacular in an almost perfect mix when you can’t decide what movie to watch.

Stephen Chow directs and plays this little gem of Chinese cinema in the peasant and ignorant thug’s role.

He will discover immense powers that will transform him into the supreme master of Kung Fu, long-awaited by the people.

With him, his inseparable friend, there is also Lam Chi-chung, an equally stupid but faithful and loyal raids companion.

Impossible not to point out the splendid comic streak of all the other characters.

Above all, the hilarious and lethal Landlady, the absolute mistress of Pigsty Alley, played with sharp irony by Yuen Qiu.

Yuen Wah is also funny as the lady’s abused husband always has difficulty restraining her temper and deadly screams.

Finally, Bruce Leung Siu-lung is the definitive villain of the story, the Beast.

He’s another Kung Fu titan who had locked himself up in an asylum alone, bored of not finding an enemy worthy of his time.

Personally, I consider it a unique movie of its kind that every lover of oriental cinema should see at least once in his life.

The third and final movie is a spy story with a twist on the comic and romance, on the absurd and the action.

A young girl, the daughter of a Nazi scientist, is involved in an international espionage game.

The USA and Russian government call their two best agents to protect her and expose a nazi plot to produce nuclear weapons.

All of them will have to fly to Rome to contact the mysterious criminal organization.

Initially, their relationship is not among the best, distrusting each other because of their craft.

The American and the Russian men, especially, are at odds, just as their respective nations are antagonistic.

The girl seems to be the balance between the two, struggling with a volatile team.

But when it comes to action, both men prove to be professionals who can cooperate.

Together they must infiltrate a wealthy Italian family, descending from a dangerous fascist officer.

A family that became immensely rich by hiding gold for the Nazis after the war and planning revenge with them.

The unlikely trio, aided by a distinguished British officer, should prevent these criminals from carrying out their plans.

The Man from U.N.C.L.E. is the perfect movie to watch when you decide to revive a dull evening with friends.

It is a spy story having young, sexy, charismatic protagonists inside a combination of action, luxury, and elegance.

The English director Guy Ritchie slows its usual frenetic pace in favor of greater calmness and emphasis on characters.

We admire the impeccable reconstruction of period environments, cars, clothes in Italy, and Berlin’s prologue.

The spy plot is a story we’ve already seen in other movies, we cannot deny it, but it’s still powerful and fun.

But the real beating heart of the movie is its cast, starting with the beautiful Alicia Vikander.

The actress plays a charming character who seems confident but hides an unmentionable fragile and need.

She needs to join the two men to fight together to protect her from the evil coming from her childhood.

A world that she believed to had left behind but now seems to threaten not only her but all humanity.

Then the two harsh secret agents Henry Cavill and Armie Hammer, will have to overcome their childish rivalry.

They, too, escape from the past, leaving behind a life they have wasted and their unhappy families.

Watch over all of them there is the charming Hugh Grant, nice and proud as a flag-waving.

In short, a spectacular ending with a movie you can not miss, especially if you love the old classics 007.

Hoping you have enjoyed what I have written so far, I leave you with additional advice:

Relate post when you can’t decide what movie to watch