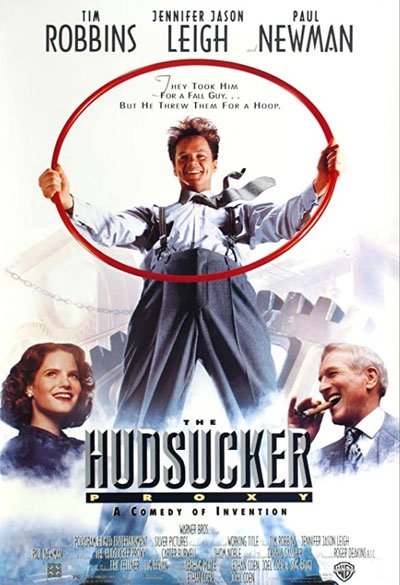 The Hudsucker Proxy is a movie about the incredible road to success of the young inventor of one of the most loved toys in the world, the Hula Hoop.

This boy is a bit stupid but full of vitality and optimism, dreaming of significant projects for the future.

As soon as he got to town, he starts working at Hudsucker Industries as a humble delivery guy.

But ironically, the president of the enormous company just committed suicide on that very day.

Flying out the window in front of his colleagues, he leaves his wealthy society without a guide.

The board of directors would like to acquire control immediately, but the stock value is too high.

So they decide to entrust the company to a fool who brings down the price, choosing our protagonist.

They present it in style to all the mass media in the world, hoping that his stupidity will reverse the market.

Unfortunately for them, unexpectedly, the boy brings out a product that changes the world of toys forever.

The idea is simply a plastic circle with sand inside to shake and spin with the hips.

The company has record sales, and the stock price goes up even higher than before.

But with the help of a female journalist, the board of directors attempts one last move to oust the new president from the throne.

Capitalism, love and lots of humor

The Hudsucker Proxy is a magical movie that surreally combines comedy with a caricatural noir atmosphere and a distant times romance.

The characters’ facial expressions and body mimics are so exaggerated that they almost look like cartoons like Wile E. Coyote and the Road Runner.

This story does not look for the historical rigor of a documentary, even preferring fantasy in confident choices.

An example of this choice is the evil cleaner and the wise maintainer of the watch, which embody good against evil.

In the various scenes and sequences, the laws of physics cease to exist.

This paradox creates a fast rhythm and a world that seems suspended within a dream between past and present.

All the characters are in their way stupid and childish, as in a bedtime story about a world that no longer exists.

The wealthy capitalists are shamefully attached to their money above their own life and happiness.

Men of power like the wealthy owner who commits suicide at the beginning, in an incredibly comic and dramatic scene at the same time.

All the others are only men and women who try to live day by day, and even they do not hesitate to be cruel or cowardly if necessary.

To summarize, a goliardic mockery towards the unbridled rush to dollars, too often forgetting the actual value of our humanity.

Ethan and Joel Coen are two phenomenal artists who have deconstructed and reconstructed every movie genre over the years.

These two brothers know how to unite like few other moments of great drama to sarcastic humor about the sins of our modern society.

Here the couple is in charge of a troop of exceptional actors, making the most of their acting skills.

A group on which stands out an immense and amusing fool Paul Newman.

The actor/ icon of cinema history plays the character indisputably more fun than all his carrier.

He plays an unforgettable, cold, and calculating capitalist but equally irresistible for his perfidious charm and sense of humor.

Tim Robbins is just as immeasurable, an actor with multifaceted talent and became a successful director with Dead Man Walking.

The stupid but brilliant creator of the Hula Hoop is a dazzling and ambiguous character.

Initially, he seems weak and defenseless, and then, after the success, he too becomes obnoxious and arrogant.

But his redemption will come thanks to the beautiful Jennifer Jason Leigh, which looks like she comes from the 1950s classic.

She’s a journalist looking for the scoop, ready to sell her life for a newspaper article.

This career woman will have to face what she thinks she wants with what she needs in life.

In conclusion, The Hudsucker Proxy was a movie that was not very successful, neither critical nor revenue.

But as happened before, time knows how to re-evaluate the works of art.

And today, this movie is an unforgettable masterpiece of a cinema that today is not there anymore.