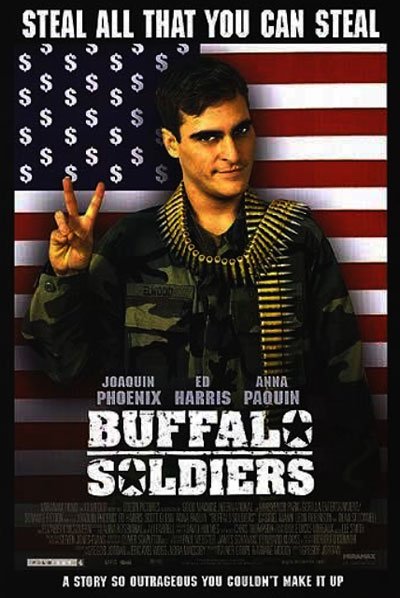 Buffalo Soldiers is a movie set in the late 1980s with an outstanding hilarious Joaquin Phoenix as the protagonist.

He is a soldier stationing in West Germany and living off petty thefts and scams against the army.

His commander is not particularly intelligent, and he also takes advantage of it to produce and trade drugs using military buildings.

But the arrival of a rude and unscrupulous new sergeant puts his business and his freedom at serious risk.

The new enemy has no qualms about playing dirty in the shadow and even killing to achieve his goals.

At first, he seems to want to face only his stupid commander, humiliating him repeatedly in front of his colleagues.

Then, he decides to destroy all cheating and theft-related stuff, starting an open war against ordinary soldiers.

In addition, he especially hates the protagonist because his daughter falls in love with him.

After a spectacular incident with a tank, he clarifies that a duel between them will be inevitable.

Therefore, producing a massive load of drugs will be the final circumstance where only one can survive.

Buffalo Soldiers is a black comedy joking about military life in a goliardic way with the funnier Joaquin Phoenix interpretation ever.

The actor plays a character who combines a little courage and resourcefulness with intelligence and cunning in dealing with others.

We inevitably get attached to this lovely but unreliable guy, even though he’s a pretty sneaky, cowardly character.

The ecosystem in which the story unfolds is credible and realistic, showing the life of these little soldiers who live abroad for work.

Being young and naive, many of them do not understand the profound change that Germany is undergoing in that historical period.

Indeed, their days run smoothly between the everyday routines of the barracks and the military exercises to which their commander holds much.

But the arrival of the new sergeant (a fantastic Scott Glenn) destroys the peace of that place.

Even though they were not innocent soldiers before, the officer brings actual violence and hatred into their hearts by destroying their lives without mercy.

A talented, eclectic and charming actor

Gregor Jordan directs this movie with irony but always maintaining a level of dramatic seriousness in all scenes.

This choice creates a small short circuit that makes us laugh even in the most unlikely circumstances, like the soldiers who massacre each other in the final.

The supporting cast adapts perfectly to this style, playing with amused humor their characters.

Above all, we have the older Ed Harris, ideally in the role of the stupid and inept commander.

A man with no more career possibilities who thinks he’s smart, but everyone makes fun of, including his wife.

Elizabeth Mcgovern plays this ambiguous, sexy, ambitious woman who plots behind her husband’s back.

But she, too, will fall victim to her manipulations by destroying her marriage without obtaining anything in return.

Finally, the beautiful young Anna Paquin is perhaps the only innocent soul in all this.

The girls are the daughter of the evilest and ruthless character in the house, the Sergeant played by Scott Glenn.

He behaves as if he were at war by eliminating his colleagues one by one, in one way or another.

But in the end, all this hatred will poison his family relationship, leaving him defeated like everyone else.

Buffalo Soldiers is an unmissable movie for Joaquin Phoenix fans and those who love a particular type of black comedy.

A comedy that sheds light on the dark side of us human beings, making us laugh and reflect on the thousand contradictions of our society.