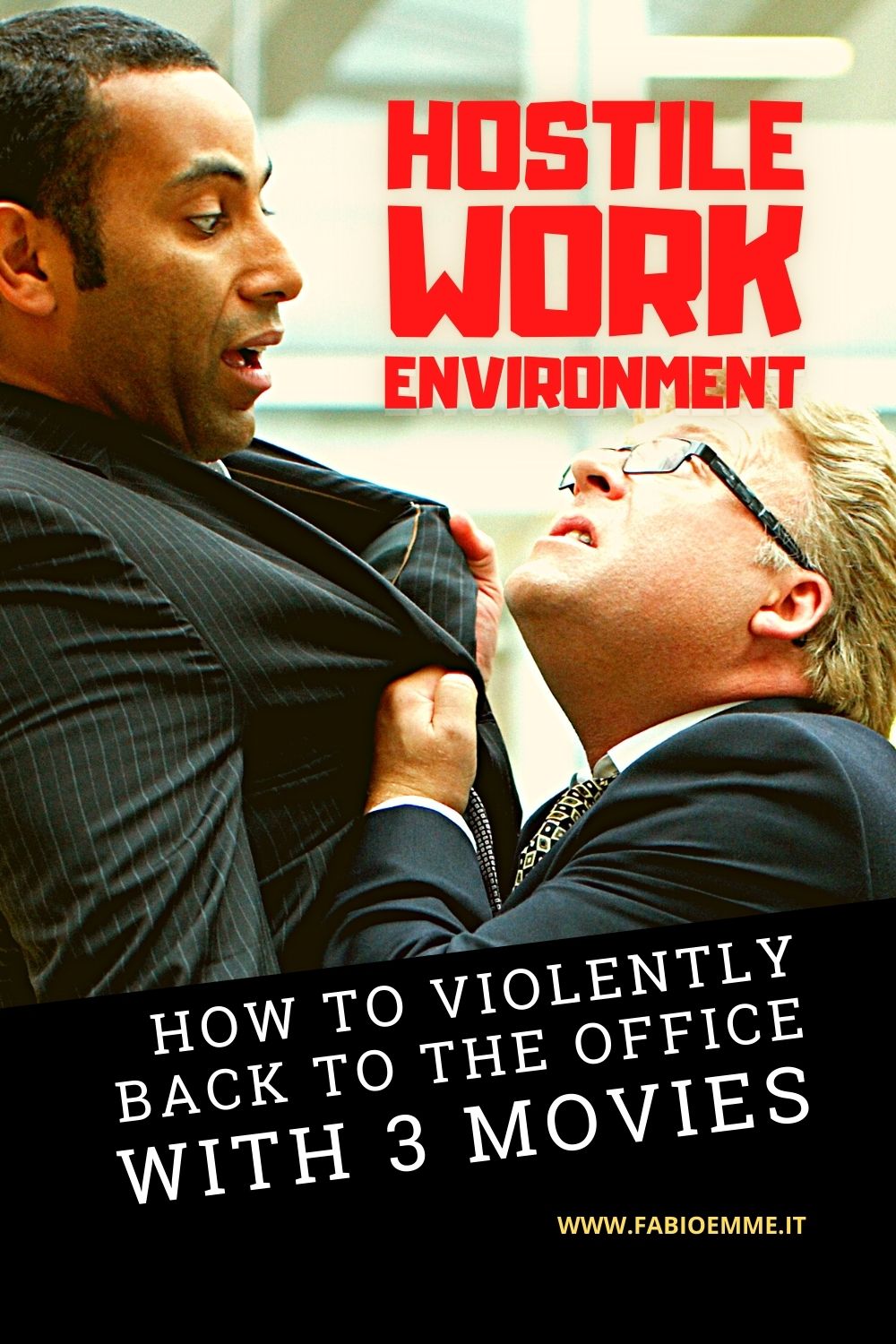 I understand that you don’t want to talk about back to the office or a hostile work environment while enjoying your well-deserved summer holidays.

But I bet that these work environments will be able to get you a smile anyway, whether you want it or not.

Because let’s face it, we all had moments when our bosses and colleagues pushed us to the limit of endurance.

We hold our fists and bite our lips, not saying or doing something to lose our coveted salary.

But today, we don’t have to repress anything, so let your beastly instincts run powerful in your temples without remorse.

Today we go to the movies for once, get pissed off and unleash that violence repressed in the workplace.

A new virus hits an office worker, driving him crazy and forcing him to kill his colleague.

Thanks to a prestigious law firm, the court acquits him as unable to understand or want to commit the crime.

The virus affects the primordial part of the brain, removing normal inhibitions and unleashing an uncontrollable madness and aggression.

Later, the same virus spreads in the vast skyscraper where the law firm that followed the case is based.

The authorities surround the building and isolate the worker, infusing the cure for this disease in the ventilation ducts.

But for the treatment to take effect, it takes eight hours, during which no one will be able to leave.

While every floor slips into violent madness, a lawyer who has just lost his job sees an opportunity for revenge.

Thanks to the virus case legal precedent, no infected person can be found guilty and convicted of murder.

Then the climb begins to get to the top floor and kill his boss, along with a girl with a score pending with the law firm.

Mayhem is a movie combining horror, fun, violence, and a pinch of bitter social criticism to the world of work.

We closely follow Steven Yeun, a lawyer whose boss has just killed his career, is a long day of passion.

Some of you may remember the actor in The Walking Dead as a faithful friend of the badass sheriff.

Here we have him as the protagonist and crazy narrator of the story.

The beautiful and fierce Samara Weaving that he humiliates and rejects at his side instead of becoming inseparable partners.

The first half-hour outlines the human relationships and power between the various characters, superior and subject of this skyscraper.

After this slower phase, but still fun and necessary, we get to the heart of the film in a crescendo without a break of action and madness.

Joe Lynch confirms his talent after the amazing Everly, by us already recommended in this article.

He’s one of the few who knows how to tell a not stupid story with good humor and a great sense of the show.

And his latest film, which the international distribution has mysteriously ignored, deserves all our attention and respect.

Changing office and nation, but always staying on the hostile work environment in a lockdown regime and physical and psychological violence at work.

We are in Colombia, where the American government isolates the local office of a multinational company.

But this time, it is not a virus to keep employees inside the building, but a series of impenetrable metal barriers that fall on every door and window.

On the outside, there are soldiers to form a barrier to prevent them any attempt to escape.

At this point, the military chief takes control of communications and informs them about their new working conditions.

The government has chosen all of them for a psychological experiment to evaluate human reactions under stress.

It’s up to them to choose whether to participate or not, but they only have a few hours to kill thirty of their colleagues.

If they do not fulfill the request within the required time, even sixty people will die.

In fact, without their knowledge, the company has installed micro explosive charges in their heads, posing as a GPS security system.

Without having time to think because of the countdown, they split into separate groups.

Friends and colleagues’ relationships disappear in a blink in a massacre game and a ruthless struggle for survival.

From natural selection to company selection

The Belko Experiment is a psychological thriller that makes its essence the relationships between the various characters.

Humor is always present, but this time more in the background than the brutality and human greed.

At this point, comedy turns black and becomes a symbolic parody of the career and hostile work environment struggle but replaced by mere survival.

Once the usual behavioral constraints disappear, all the tiny misunderstandings and personal rivalries flare up explosively.

The main protagonist is John Gallagher Jr., the naive and honest young man who refuses to participate in the massacre until the last moment.

But whether you like it or not, you will have to deal with Tony Goldwyn, the office manager who catches the situation and builds a platoon of faithful.

Among them is the smiling and disturbing John C. Mcginley, friendly and grumpy Dr. Cox in the TV series Scrubs, here instead cruel dog eating dog.

Greg Mclean continues the path taken with his previous two Wolf Creek, another inhuman portrait of Australia barbara and rural.

It does not have the same bloody wickedness, but it still emphasizes consideration of the human spirit in adversity.

And perhaps, in conclusion, the real test subjects of this experiment are us viewers, for whom it is impossible not to see ourselves and our lives in his films.

Back to the office, the first question we ask is: how do we find an office to work in the first place?

Before you even get a salary, you have to take an interview or an exam.

This is what this film is about, putting it in the context of humans suffering from a deadly disease.

Eight characters take an exam to become part of the largest and particular company in the world.

In front of them, they have only one sheet and a pen, and on their sides, they have seven candidates willing to do anything to win.

But the exam immediately takes a strange turn, becoming the opposite of what they expected.

Instead of filling out a questionnaire with a series of answers, they will have to find the question.

The only right question among a thousand questions, to then have in prize the work of their dreams.

Slowly, the candidates realize scattered clues and traces to get to the solution in the room where they are located.

They will begin the complicated resolution of the enigma at that point, trying to cooperate.

But they do it looking back on their diabolical and ruthless opponents, in a growing state of madness.

Your death, my life… dear colleague

Exam is a fascinating puzzle where the pieces fit perfectly, even if initially we struggle to see them.

The atmosphere seems distorted, and something is not right from the beginning, from the examination room to the suspicious eyes of the protagonists.

Great credit then to the choice of the cast, having brought together a group of actors and actresses virtually unknown but all valid and capable.

These men and women hide his mystery within the enigma, significantly changing personality and attitude throughout the film.

The English director Stuart Hazeldine does a great job of mystery and whispers, always keeping the story’s violence high without ever reaching horror.

A feat that could not be easy for a story that never moves from the four walls of this hostile work environment test room.

Instead, the story’s rhythm and the focus on the various characters change constantly, remaining consistent within a larger plot.

A plot that slowly widens from this small room to embrace the whole world.

This is a world suffering not only from a global pandemic and an increasing lack of goodness and compassion.