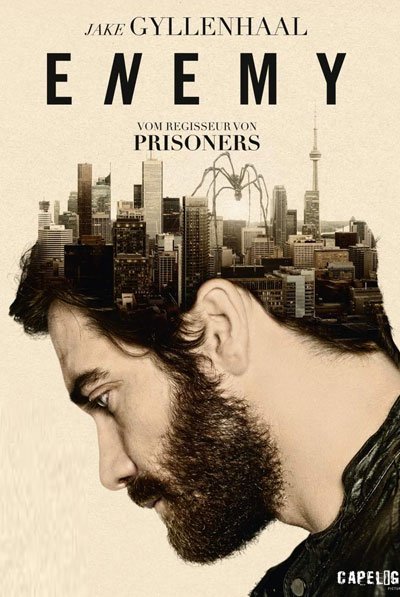 Enemy is a 2013 movie with an outstanding Jake Gyllenhaal giving us a fantastic performance in a double role.

In the beginning, he is a professor who teaches philosophy and politics at the university.

His life is safe and quiet, with a beautiful partner and a promising career, but he can’t feel the happiness he’s looking for.

Since his birth, he has always felt the lack of something and not being a complete person.

Until one day, he discovers a man entirely identical to him, just by chance while watching a movie.

After a brief investigation, he finds out this actor’s name and where he lives, trying to contact him to find out if they’re twins.

When they finally manage to meet, their lives will change forever without return.

Indeed, an ambiguous relationship immediately develops between them.

The strongest begins to manipulate the other, even ending convincing him to shift their lives and women.

But their new freedom has a price to pay, and in their past, they hide monsters waiting to come out into the light.

Enemy is an excellent story of characters set halfway between the twist of fate and conspiracy intrigue.

The dazzling beginning is inexplicable and captivating, paving the way for the events that will take place afterward.

The real driving force behind everything is the psychology and desire of these characters.

When these two men finally interact, the hidden shadows of their souls are illuminated and brought to the surface.

The pace of the narrative is slow and calm, sliding from the ordinary to total madness with believable naturalness.

With few characters and mysterious and rarefied atmospheres create a fascinating, unique, and inimitable mood.

The music is suspended between the dream and reality, often making us doubt what we see.

The story is always suspended halfway between the thriller and the fantasy, suggesting a larger conspiracy never really explained.

Finally, When the movie ending finally comes, it amazes us to the point that we even forget to look for meaning.

Two faces of a great actor

This movie’s dominant force is Jake Gyllenhaal, the double main character and his own worst enemy.

These two men are extremely different from each other, though seemingly totally identical.

The professor is intellectual, shy and awkward, uncertain of his choices, and afraid of his mysterious twin.

Instead, the actor is bolder and more confident with an aggressive and sexually brazen attitude.

Living apart, each one of them was harmless, but when they meet, it triggers the fuse of an inevitable explosion.

Their characters may initially seem secondary and submissive, almost unaware of what is actually happening.

But in reality, they have a strength and a determination that will emerge suddenly and surprisingly.

Finally, a small but excellent cameo by Isabella Rossellini in the role of the mother.

This woman seems to know more than she wants to tell about the mysterious web of intrigue surrounding the lives of her two men.

And maybe, as I believe, it could even be the woman we see in the sexual spectacle at the beginning of the story.

Denis Villeneuve sculpts a film full of hidden meanings to discover that everyone should look at several times to really appreciate.

A masterpiece of philosophy and mystery that I advise you not to miss absolutely, especially if you have enjoyed his following Sicario and Blade Runner 2049.

Willy Wonka – An original drink for the original movie

Ronin – The Masterless Samurai From...