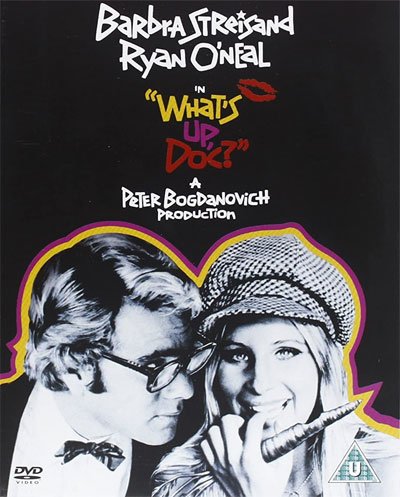 What’s Up, Doc is a comedy of sparkling anarchy with the divine Barbra Streisand absolute protagonist madly and irrepressibly in love.

The barely 30-year-old actress plays a girl who meets a young musician in a shop, starting to woo him relentlessly.

The boy is in town to win a musical culture contest with unique stones he is very proud of.

Unfortunately for the girl, he is already with a woman who follows him constantly and irritatingly everywhere.

This is not remotely close enough to discourage her.

So she manages to get her away from him, taking his place and presenting herself to everyone as his girlfriend.

Initially, he tries to get rid of her in every way. But she has great success with the rest of the contestants and the contest organizer.

Seeing the chance to win the final prize, he decides to play along and pretend to be her boyfriend.

In addition to the girlfriend who returns to the office, the two lovers will face other problems.

Indeed, some thieves and clumsy spies looking will try to steal in every way the boy’s precious musical stones.

At that point, looking for identical bags, all these stories intertwine in a devastating and explosive ending.

Love, humor and anarchy without any control

What’s Up, Doc is one of the best Barbra Streisand acting performances ever, at the time still at the beginning of his career.

The actress plays a crazy and lovely rascal who has no inhibition, following her man as an unstoppable predator.

She is a girl of culture and intelligence, beautiful and sunny, conquering our sympathy from the first moments.

The object of his desires is the equally young and future movie myth Ryan O’Neal.

Indeed, the actor will be in cult movies as The Driver and Barry Lyndon, sculpting his face in our imagination.

In this case, he’s the victim of Streisand’s love, and she will not surrender to anything and anyone before conquering him.

Their cute and intelligent squabbles are simply irresistible, leaving you almost breathless for their fast pace.

Also, slowly, the two lovers will be able to involve in their madness all the other characters.

Simply a masterpiece, finally, the whole final part in the court with the absurd concluding trial.

Where we finally discover the actual name of the beautiful protagonist, we understand her absurd life in a few minutes.

A director, little money and a lot of talent

Peter Bogdanovich was still at the beginning of his directing career when he directed this film.

Already appreciated for his work on television and as a film critic, he was one of the most valuable members of the Corman Film School.

Roger Corman produces his first movies glimpsing his remarkable talent to the camera and his extraordinary imagination and narrative ability.

Bogdanovich will become one of the pillars of the famous production company.

In addition to making excellent movies, it will be an incredible hotbed of talents for the future years of cinema.

Indeed, this school of artists will emerge with great names such as Jack Nicholson, Steven Spielberg, Francis Ford Coppola, and many others.

What’s Up, Doc is still the most entertaining movie of his entire career and a milestone that will launch the star, Barbra Streisand.

The result is a recipe of other times unique and almost inimitable, combining the various elements of anarchy, love, and culture madness.

The dialogues between the various characters, another rare thing, combine dementia to the great culture of the director and his love for the fine arts.

But in the end, the thing that matters most to us viewers is just that it’s an exceptional comedy full of original ideas one after the other.

So don’t be afraid to dive into the ’70s. I assure you that this movie amuses today precisely as it did then in the past.