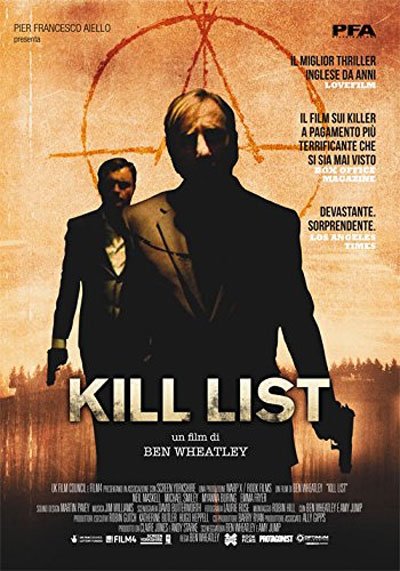 Kill list is a movie about a former soldier who accepts a murder contract with a friend after retiring from the army.

The man lives in the country with his wife and son and would, refusing to kill for money again.

But their economic situation is not the best and, besides, he wastes money on useless garbage.

The fights with his wife become increasingly furious and unbearable, risking ruining their family.

So when one of his comrades offers him the deal, he accepts a meeting with clients looking for a killer.

These men have an attitude of arrogant superiority, exhibiting their wealth and treating them with contempt.

But they offer a lot of money for a contract to murder three targets, so they end up accepting.

Amazingly, they seem to know the killer and even thank him even before dying.

But the last target is an influential politician, and killing him looks like a suicide mission.

Trying to get out, the two friends discover that they have no choice and no go back until it’s over.

To protect their families from cruel retaliation, they decide to go through with it at any cost.

The extraordinary story of the ordinary life of a killer

Kill list is a movie halfway between the pulp novel and the thriller mystery with elements of Masonic black magic.

The men of power we see in this story are behind everything that happens.

They choose the killer not only because of his ability to carry out the murder contract.

Indeed, the various assassinations seem only a preamble to a complicated satanic rite of the protagonist.

In this type of world, we almost end up partnering with these killers.

In fact, although evil, the two men are nothing but two soldiers who continue their work outside the army.

Their experiences had separated after a mission tragically ended so many years before.

They talk about it, remembering the episode continuously, but we will never know exactly what it is.

In the grand scheme of things, their friendship and hate relationship is the only thing that drives them to continue.

Family and friendship are therefore the main themes of this movie, together with the impunity of the rich and powerful men.

A director linked to narrative substance and minimal aesthetics

The excellent director Ben Wheatley uses this movie to deconstructs our society from the inside.

The various scenes of their target hunting are funny and evil, told with intelligence and refined British humor.

The staging is so simple to seem poor, but in reality, it is full of details scattered with great intelligence.

The friends Neil Maskell and Michael Smiley work perfectly, nice and violent in their work.

But they also have a touching human side that comes out in the most unexpected moments.

In a few scenes, their friendship becomes the pivot of the story, together with the family we see in the beginning.

Myanna Buring plays a strong and complicated wife, faithful to her husband and often in stark contrast to him.

The woman is morally ambiguous without any problem with his killer work.

For her family needs money, and she doesn’t care how he brings them into the wallet of the house.

But in the end, the price to pay will be much higher than what his family will have had in return.

In conclusion, Kill List is one of the best movies of 2000, a movie beautifully rich in mystery and horror veins.

Personally, I have seen and reviewed it dozens of times already, always finding small new elements that make me love it every time more.