Sleepover – The movies to choose for a good evening with friends 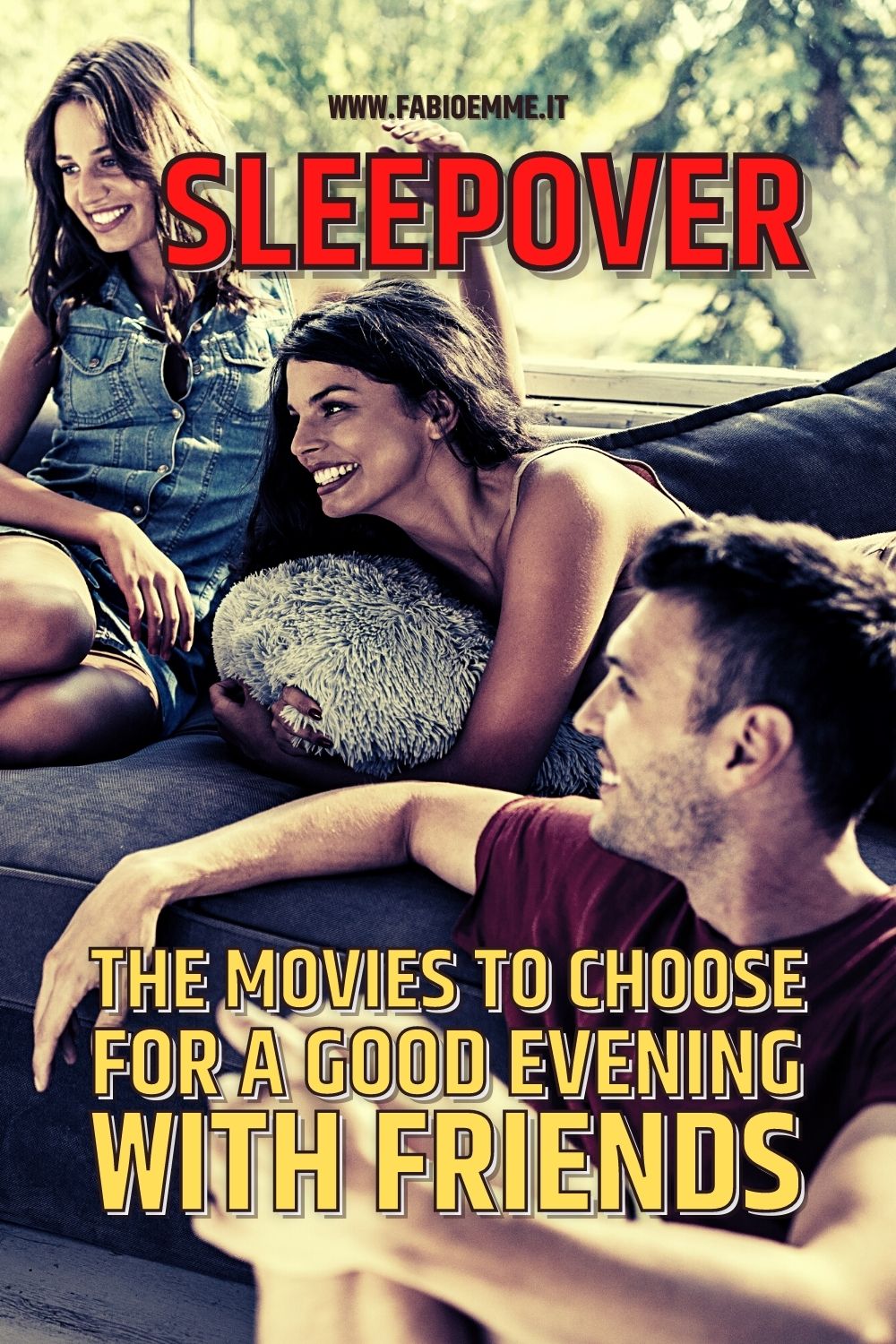 You have an evening sleepover among friends in sight, but among your thousand thoughts, you are without ideas for a good movie to watch?

Don’t worry too much; we’re here to save you.

Each of us has its tastes, so it will also be for our friends, that’s why choosing is never easy.

But starting from some healthy laughter, we are always halfway to success.

Then we add a pinch of different movie genres to excite and have fun, and the games are done.

So here’s an action, espionage, and a horror movie that all three are mixed up in comedy.

Curious to know which are these sleepover movies that will save the evening for you and your friends?

Without further thought or delay, let’s scroll through this week’s watching list.

A private detective is proposed to be a bodyguard for a young stripper.

The job doesn’t excite him, but the money suits him to put his disastrous family situation back on track.

Indeed, his wife and daughter do not want to deal with him, a fierce and unbearable alcoholic.

But before he can even accept the offer, an old friend of his hired for the same job is killed by a car bomb.

Soon after, the stripper is brutally riddled with bullets in an ambush along the way.

At this point, the detective begins to investigate together with the victim’s boyfriend.

The boy, until a few years earlier, was a rich and famous football player.

Unfortunately, he also fell into disgrace, sucked into the drug trade and illegal gambling.

Although they can’t suffer each other, they have to pair up to solve the mystery of these murders.

But underneath that story lies a tangle of mob criminals and corrupt politicians from which it will not be easy to get out alive.

The Last Boy Scout is a classic Hollywood buddy movie, where for once, the funny, carefree recipe works all the time perfectly.

Bruce Willis and Damon Wayans are a well-matched couple, handling the story with their funny duets and badass attitude.

In addition, their characters have a charming characterization and a good differentiation.

Alternately helping or hating each other, they aren’t necessarily big friends all the time.

At first, they may seem onlySummarizetypes of the rude detective and the athlete at the end of his career.

Later, however, when we know them more deeply, they reveal both surprises.

When he brings out one of the best titles of his ups and downs filmography, it is the case.

Ridley Scott‘s younger brother has done several excellent cults of my childhood, alternating with other much more forgettable movies.

This duality is why he makes stupid (but successful) blockbusters like Top Gun and Days of Thunder.

And next to them, he also makes unforgettable masterpieces as The Hunger e True Romance.

In this case, however, the balance between quality and entertainment is practically perfect.

The action scenes have the director’s usual hyperkinetic editing. But since being comical, this is not so much a problem this time.

In conclusion, this is one of my favorite sleepover movies of the 90s. It is always suitable for a joyful evening, ideal for a naughty gang of friends to the full.

In the heart of the American capital is the headquarters of CONTROL, the most secret among the secret intelligence agencies.

It was the last bulwark of freedom for years. Protecting the United States from all threats, they defeat a powerful criminal organization called KAOS.

But in reality, KAOS is still active and plans a deadly nuclear attack. A threat staged to extort money from the government with blackmail.

In addition, CONTROL’s operation reduces to zero after exposing the true identity of all its undercover agents around the world.

Then, the only one who can fight is a shy and awkward analyst always dreaming of being a real spy.

His task is to infiltrate the enemy in Russia together with a charming spy colleague with great experience and skill.

The girl escaped the massacre and returned home with a new face and identity, equally unknown to the enemy.

Finally, the unlikely couple will have to find where KAOS produces its weapons of mass destruction.

The betrayal is close as the big boom countdown in Los Angeles is more and more on its way.

When 007 meets Laurel and Hardy

Get Smart is a funny spy/action movie, perfect for a sleepover, that stands on the comic times of Steve Carell.

The actor usually hams it up without thoughts with his face and body mimics, always being humble and friendly.

By her side, the excellent and beautiful Anne Hathaway is not less as shoulder support to the protagonist’s jokes.

In addition, she performs a series of good fights, perhaps even better than her Catwoman in The Dark Knight Rises.

Inspired by a television series by the brilliant Mel Brooks, the film is a tasty trick in spy 007.

The mediocre Peter Segal does his homework aside and leaves as usual to work his comic star on duty.

It was a wise decision for Adam Sandler in The Longest Yard or Jack Nicholson in the beautiful Anger Management.

Recently, he used Sylvester Stallone and Robert de Niro in Grudge Match, a comic crossover between Rocky and Raging Bull.

In short, another perfect sleepover movie to watch with friends when you want to revive the evening atmosphere.

Just another night in Baltimore, in the offices of a late-night newspaper.

The night watchmen prepare for another shift without the thought of doing anything sweet, welcoming among their ranks a recruit.

But everything is about to change forever when someone accidentally delivers the coffin of a famous clown to their address.

Indeed, the man is not dead at all, but in reality, he has become an infernal vampire thirsty for blood.

The diabolical being then begins the hunt for human beings, turning into as many vampires as all those who bite.

By surprise, most of the employees immediately die and then come back to join the clown army.

Together with the only staff survivor, our brave guardians try to escape in any way from the editorial staff.

But when they realize vampirism rampages uncontrollably in the city, they have no choice but to stay.

During the long evening, these friends will discover that they have heroes skills. Together with the prettiest girl and (unfortunately for them) the most lesbian in the whole office.

Within the walls of that anonymous complex of offices, they will fight an epic struggle for humanity’s fate.

The Night Watchmen is an irresistible comedy-horror for a demented evening capable of giving a smile to your darkest friends.

The group of protagonists is the classic bunch of rogue vagabonds with a good heart and light spirit.

These lazy guardians have always only fought time, killing boredom to get to the end of their turn.

The recipe of horror-comedy is nutritious and tasty. A successful meal with few ingredients but wisely mixed by an honest chef with his humble tools of the trade.

It is impossible not to smile about every character’s idiocy and the absurd situations in which they come to find.

The violence is not sweetened at all. And from the bites of the vampires, gush liters of blood between employees comically intoxicated and prosperous naked-breasted girls.

This product is inferior in budget and big names. If not for the fabulous James Remar, the Dexter father in the homonymous series.

The protagonist in films such as The Warriors and 48 hours, the actor, and having a small part here, also plays the role of producer.

Mitchell Altieri confirms his ability to juggle in the genre with little money but many ideas and talent to achieve them.

From scene to scene, the director makes the most of every situation to embroider bloody horror moments and immediately after laughing on it without thoughts.

To summarize, it is a sleepover movie to put on top of your preferences to laugh in the company relaxing and enjoying the show.

Ideas for Home and Movies – Step 1