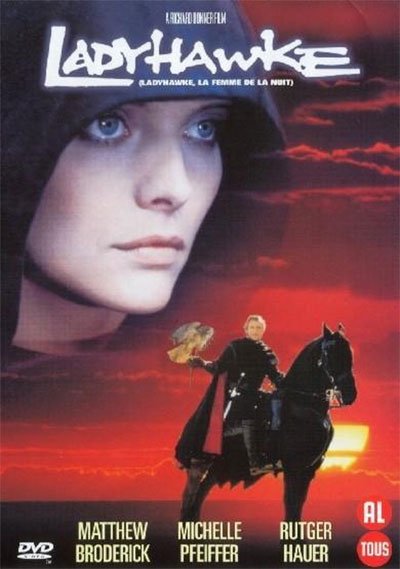 Ladyhawke is a timeless love story between castles, magic, and knights, an unforgettable cult directly from the ’80s.

An ancient curse drives all the story: she is a hawk during the day. At night he is a wolf.

Their condemnation is cruel and straightforward. No matter what, the two lovers are always together but eternally divided.

Their life changed after a corrupt churchman put a curse on them cause he’s insanely jealous of the young girl.

Expelled from their native country, they have wandered alone in their half-lives ever since.

Until one day, the fortress bells sound the alarm for a sudden and incredible escape.

The wolf knight then realizes that it is time to return to the castle and take revenge on the villain who cursed him and his Ladyhawke.

So he begins his return journey, fighting the guards with the help of a bit of rascal and a drunken priest.

But perhaps for the two lovers, there is still hope to break the curse.

If they will seize the opportunity that fate will offer them, night and day for once will be one.

Love and knights, magic and curses

Richard Donner is the great director of this movie, quickly became a cult to my generation.

He’s an author with great cinematic mastery and the creator of some great little masterpieces from the ’80s.

From The Goonies to Lethal Weapon, or even the first Superman with Christopher Reeve, this director has stolen a piece of all our hearts.

This timeless fairy tale has Rutger Hauer and Michelle Pfeiffer as a divine couple in love separated by a cruel fate.

Although still young and not famous, the two actors capture our eyes and kidnap our souls with their compelling interpretations.

He is a proud and unyielding daytime knight, and she is a sweet princess who only lives at night.

We remember the remarkable and equal young Matthew Broderick, a little kind helper, clever, and a bit of a coward.

Finally, John Wood is a supreme vicious Bishop, cruel and tireless in wanting revenge for his denied desire.

Also, allow me a little national pride. I’m happy that it shows many natural beauties and rural history from the ’80s of my country.

Indeed, apart from the scenes in the castle (in France), Ladyhawke was almost entirely made in my beloved Italy.

I love this cult as the two protagonists love each other, happy watching it even today, forty years later.

Capone – The end of the most dangerous gangster ever

Warrior – When you fight for...