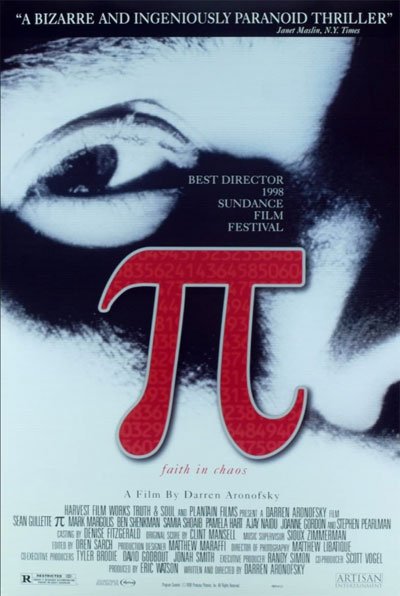 Pi is a movie about a mathematician searching for a universal law studying the many forms of the golden spiral.

He lives in his apartment, isolating himself from everything and working on his numbers all day long,

His only human relationship is his old mentor, another mathematician, to expose his bizarre theories.

One day, due to a computer failure, he finds a series of numbers that could finally be the answer.

Immediately, a multinational try to buy him to exploit its formulas to predict market trends.

At the same time, a sect of Jews approaches him, trying to bring him closer to their religion.

But, secretly, they are also mathematicians searching for a divine message hidden in one of their sacred books, the Torah.

His research, therefore, becomes a trap without exit and his world full of enemies who want to steal his work.

But his obsession and physical pain are greater than the pressure of unscrupulous religious cults and multinationals.

Finally, to solve the inextricable dilemma of the golden spiral, he crosses the border of madness and risks his life.

Beyond the edges of the universe and the human soul

Pi is an extraordinary and unprecedented mathematical movie, exciting and tense as an Alfred Hitchcock thriller.

The protagonist’s numerological obsession becomes a disease that torments his brain, both psychologically and physically.

Man must constantly resort to drugs of all kinds to overcome his pains, which increase as he gets closer to the truth.

In addition, mathematics is part of the plot, not as difficult equations but as an integral part of our world.

Scene after scene, we too end up seeing the golden spiral in everything.

Everything becomes mathematics and geometry: from the smoke of a cigarette to the foam of a coffee, from the shape of the Milky Way to that of the human body.

Just as real are the speculators who surround the poor mathematician like vultures.

By trying to exploit his intelligence to achieve their aims, financial or religious, all of them will push him beyond the abyss of madness.

But in the end, from the bottom of that black and dark well, a better man will emerge than all of them who will finally be at peace with himself.

Stories of exceptional men and women who live in torment

Pi is the debut of Darren Aronofsky, who makes a stylish and absolutely unforgettable movie.

The director lays the foundations for what he will later develop in his subsequent successes as The Wrestler or Black Swan.

Stories of grieving souls, men, and women cannot enter the normal world and are always one step away from the final madness.

Scene after scene, he lets us enter the painful but brilliant psyche of his characters, empathizing with their madness as if it were ours.

And at the end of the journey, nothing is like before, and our world has changed forever.

Aronofsky chooses a magnificent and timeless black and white, classic and elegant for any occasion for his first work.

Sean Gullette is an extraordinary protagonist, lucid and crazy at the same time.

A man who tries to show himself strong but who lives with pain and loneliness.

The actor, if possible, is even better than the protagonist, managing in a few minutes to sculpt an ambiguous and fascinating character.

To summarize, even if Pi was not a successful box office movie, it still allowed the director to show his talent and power.

So if you have never seen it, immediately repair this wrong that you have done to yourself.

Trust me, and it will be worth it.