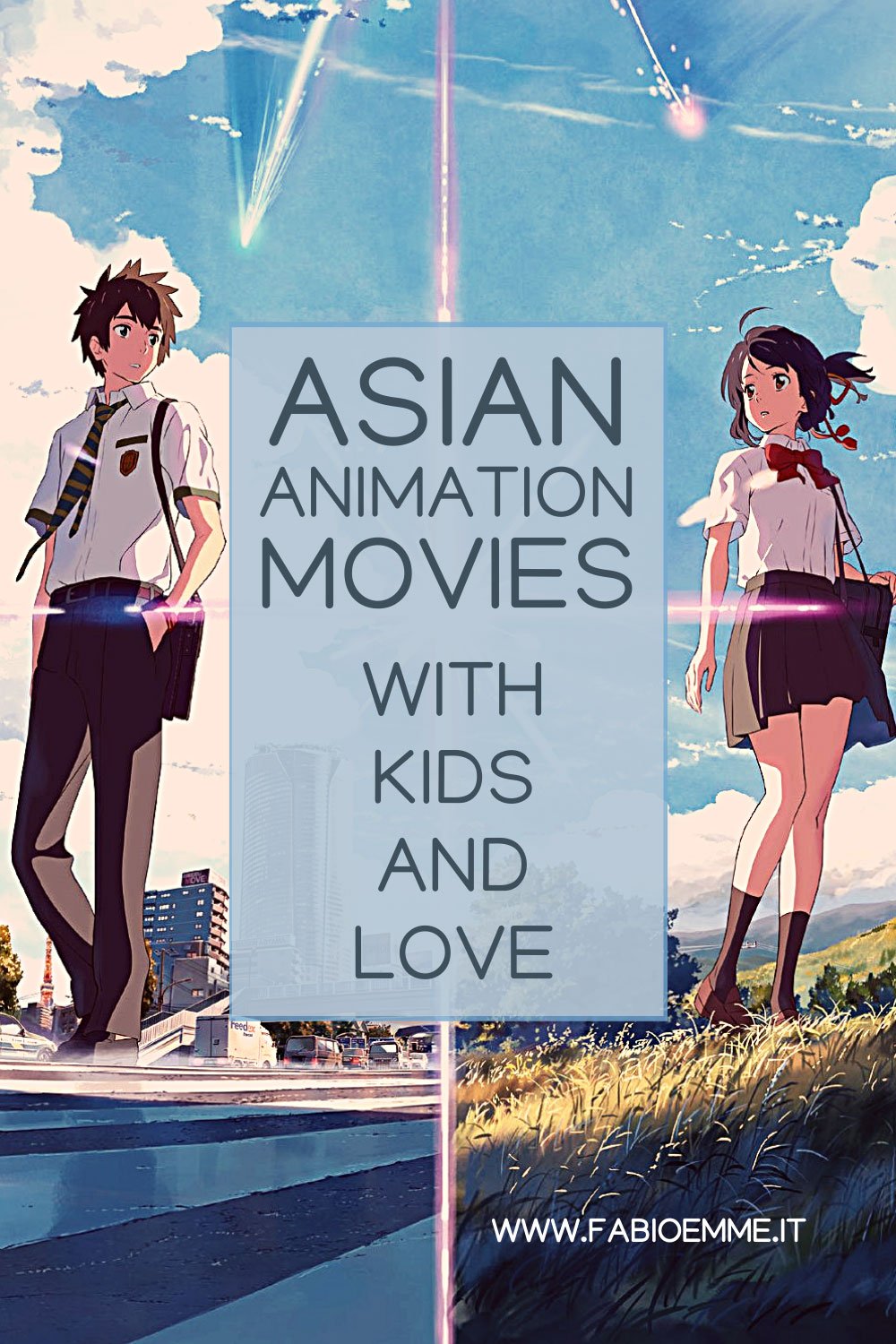 What to see with your kids, if not some of the beautifully Asian animation movies that east produces with love every year?

It is vital to feed our young people with the proper thought. The best way is to fascinate them with fairy tale poetry and then get straight to their hearts.

A little break in a world that travels faster with less and less time for patience and compassion.

Understanding and accepting others is what we best teach them, including cultures as far away as the East world.

Today I want to help you decide what to choose for your children, opening their eyes with fun entertainment.

A country neither better nor worse than ours but forged by different epochs and different cultural paths.

So let’s take a closer look at three fantastic Asian animation stories, delicate and exciting, that will perhaps bring you back to your childhood for a few hours.

A young girl arrives in our oceans from a parallel world in a beautiful red dolphin form.

She must face a rite of passage obliged by the tradition of magical beings of her progeny.

For thousands of years, these people supervise and protect humanity, helping maintain water and seasons control throughout generations.

Shortly before her return, however, she is in grave danger, miraculously escaping death thanks to the help of a young fisherman.

The fish/girl then returns to her kingdom, but the boy tragically dies while saving her.

Unable to live with the terrible guilt, she finds a way to agree with an old sorcerer to bring him back to life.

The enchantment succeeds, and the young boy’s soul returns from the afterlife in the body of a fish.

Initially, she takes care of him, waiting for him to be ready to transmute again into human form.

But soon, she will understand this spell has deeply jeopardized the laws of nature and that the price to pay will be inadmissible.

In love with the young fish, the kid has to choose between abandoning him or letting her magnificent realm be devastated by the consequences.

Big Fish & Begonia is a pearl of Asian animation full of pathos, originality, and cinematic inventiveness.

In an epic crescendo of adventure and magic, the most challenging themes blend perfectly with the story of the two lovers.

The story quickly transcends romance love between different beings and takes the shape of the transition to adulthood theme seriously.

The girl grew up faster after the ritual trip into the human world.

Facing life and death, love and loss, she finally discovers selfishness and sacrifice.

Water is the ubiquitous element in this story in the form of the magical mutations of its protagonists.

If the boy falls in love with her when it is a dolphin, in return, she loves him when he is a fish.

The desire to care for and protect the defenseless pushes both towards love, finally becoming adults ready to sacrifice everything.

This movie has conquered Asia, not unusual for an audience seeking the transposition of this famous Chinese legend.

But also in Europe and the US, it remains an Asian animation fairy tale making adults and children happy.

A boy and a girl wake up one morning like any other, magically finding themselves in each other’s bodies.

Initially amused, they explore curiously the unknown life in which they find themselves in the middle.

When the episode continues to repeat day after day, they attempt in vain to contact each other without finding each other.

Stuck in an unreal situation, they try to explain it to their friends and parents, who mock them.

At that point, with no way out, they start trying to help each other, leaving notes on their diaries and cell phones.

Slowly, the irresistible desire to know each other grows in them.

Together it goes with an even stronger feeling that neither of them can deny anymore.

But their fate is separated from an imminent catastrophe, a comet in the process of devastating the girl’s village.

And if the two lovers cannot realize the dream of meeting, they will at least try to avert the danger.

Of course, no one believes these simple kids.

Therefore, they will best organize an emergency evacuation, trying to save as many lives as possible.

An impossible love between two kids beyond space and time

Your Name is a romantic animation fantasy, fun and exciting in the famous Asian style, that focuses on the inevitable irony of fate.

It is, above all, one of the few animated films that treat children lovingly and intelligently as adults.

Through the joyful and hopeful eyes of the protagonists, indeed, we all go back in fear to our childhood.

These school days were more straightforward, and we were only looking for friendship, love, and happiness day by day.

Their perspective is unique, both masculine and feminine.

In their respective bodies, they are carrying on the life of the other, trying to do their best.

He is a compulsive boy accustomed to a big city like Tokyo, while she is a shy little girl living in a small country.

Their expectations and culture are therefore similar but different, shaped by their growth habitat.

The male wants to become an architect and designer, working as a waiter to get by.

Viceversa, she doesn’t know what to do to leave home and finally see the world beyond her small village on the edge of Asia.

Together they involve their friends in this minor epic, even trying to rewrite the course of history.

Your Name was a huge international success, to the delight of kids who have always loved animated films.

And I’m happy to add my applause to the chorus of critics and audiences worldwide.

This animated film follows two lovers over the years since she arrived in her school as a child.

Because they’re very similar, both a bit sad and lonely, they are immediately attracted to each other.

Happy with each other’s company, they do not care about the teasing of their companions being together all the time.

But their parents have to move from city to city for work needs, moving them more and more away from each other.

Despite the long-distance and time, they remain in contact by writing letters and later messages and emails.

In their minds, it is always vivid the memory of a night spent together after an endless train journey full of delays.

A night with their first kiss under a cherry tree, whose leaves falling at 5 centimeters per second.

Growing and increasingly burdened by studies and their commitments, separation seems inevitable to both.

Can a feeling, even if so strong and pure, resist all that time and the immense distances that separate them?

The incorruptible and tireless love of two kids

5 cm per second is an Asian animation love story made of long thoughts, words never said, and letters never delivered and lost in the wind.

The adventures in the lives of the two protagonists come and go like the long trains that cross the rural communities of Japan.

In this Asia nerve ganglion, contradictions lead the past changes inexorably entering the future.

Similarly, we see these two children grow up, become teenagers, and then move the first steps as adults.

Their thought always returns, inevitably, to their love lost in time and separated from an inevitable and mocking destiny.

The drawings are accompanied with sweet poetry every moment through their journey, moving from city and seasons over the years.

With its three episodes, which treat several moments during their growth streaked with sadness and nostalgia.

Nevertheless, the film never falls into the dramatic tear of unfinished love, always leaving the light of hope at the end of the tunnel.

Makoto Shinkai continues to tell the themes dear to him of adolescence and abandonment, as in the previous Your Name.

Simple tales yet undeniable power and charm can bring us back to our memories that maybe today we do not even confess to ourselves anymore.