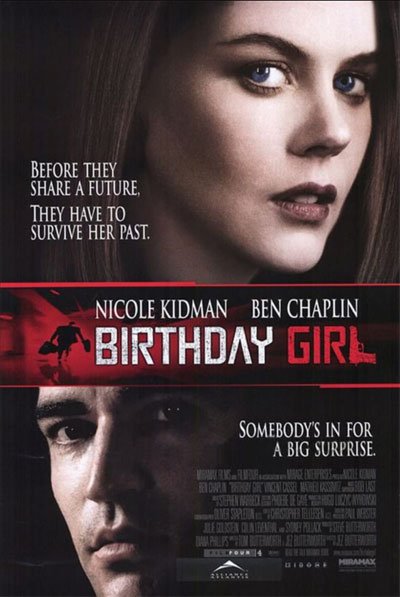 Birthday Girl is the story of a bank employee searching for a partner online, establishing an agreement with an unknown girl from East Europe.

When she finally arrives at his house, he is initially disappointed because she only speaks Russian.

But the girl is brilliant and beautiful and by the lonely and misanthrope boy starts to appreciate her.

Furthermore, by following her bondage sexual tendencies, she manages to establish an intense and satisfying rapport for both.

But one day, from East Europe, two friends of hers arrive intending to join and live in the same house.

The boy struggles to accept the newcomers, two very crude and vulgar men.

In addition, he soon realizes they intend to take advantage of the situation living there for free.

But the reality will be even more complicated and terrible than he expected.

In the end, he will have to fight to defend his home, his woman, his job, and his life.

Birthday Girl is a bizarre and fascinating English crime story with a delightful and funny humor romance from east Europe.

The love story starts initially as fiction, but it soon becomes something else for the two tender protagonists.

Both of them live in their little world closed and wary of opening up emotionally to others.

Initially, they distrust their own emotions. Living their days together, they simply enjoy the moment do not expect it to last in time.

Only when they risk losing everything do they find the honesty to admit their feelings and accept the consequences.

Last but not least, Vincent Cassel is, as usual, an excellent villain on duty for this plot.

The actor succeeds to be evil and at the same time charming fun, always leaving his mark in every movie.

Jez Butterworth directs what, to date, unfortunately, remains his only movie.

A story poised between drama and black comedy, where the wickedness and absurdity of certain situations become irresistibly comical.

In a way, we can say that it is like our lives, where what today seems like bad luck becomes something to laugh about tomorrow.

The story of the ordinary man with the empty and boring daily routine ends up going further than what he was initially looking for.

Indeed, not only does he find love but also finally gets to live an adventure for once in his life.

It is also very sweet how the sexual topic of bondage is addressed, without perversion but almost with the innocence of two children playing with each other.

A sexual fantasy in which the couple jumps without hesitation, satisfying their pleasure without shame in a natural and fun way.

But in the final analysis, it is basically the story between two profoundly different people yet united by destiny to be together.

Birthday Girl was not a huge success in cinemas and today’s audience has almost completely forgotten it.

But despite it, it still managed to cash in much more than its small production budget, achieving a good commercial result.

Today it remains one of the sexiest and most intense tests of Nicole Kidman, which with simplicity manages to seduce all of us every time without effort.