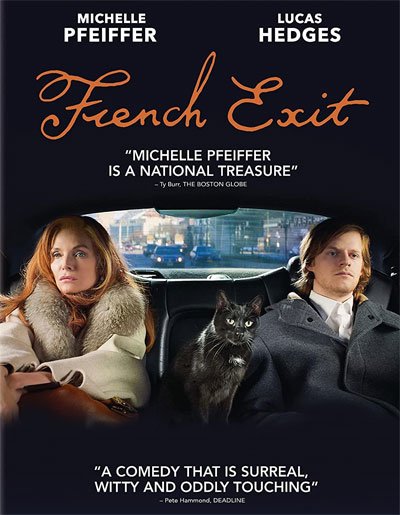 French Exit is a movie about a wealthy woman and his naive son going to Paris after her husband’s death.

Their family has always lived in luxury and comfort, but their lawyer communicates they’re broke.

The mother has to sell everything she has left and move to Europe to her old friend’s house.

During the voyage by ship to the old continent, his son has an occasional relationship with a young psychic.

Once they have settled in the new house, they will have to call the girl for her help.

Indeed, their cat has mysteriously disappeared, and the psychic could trace him with her powers.

Mother and son are determined to find him, as believing the spirit of the deceased father/husband resides in the animal.

Both had a complicated relationship with the man, and they want from him answers about their current condition.

Shortly, many people begin to live inside the house, involved in their own way to find the cute little animal.

But the mother truth is that trip to Paris could be the last before the last experience waiting for death.

Much of his strength lies in the protagonist, a phenomenal elegant and evil Michelle Pfeiffer.

The actress succeeds in being cynical and sweet while alone and tired yet still full of strength and life.

Every dialogue is an opportunity to fight and impose with intelligence and irony her class and superiority.

The only person in the world she has feelings for is her son, the equally likable and lovable Lucas Hedges.

The actor is an excellent shoulder enhancing the protagonist’s qualities with his naive trust in the world and people.

He doesn’t know what to think about his dead father, with whom he has never had a real relationship.

Searching the cat will then become searching for what really lacks in his life, as the beautiful girlfriend, Imogen Poots.

Being wealthy may not be enough for a woman

Azazel Jacobs directs the descending parable of a wealthy woman who finds herself while losing everything she possesses.

The piles of money in her closet go off one by one, just like the cat running away from a stupid fight.

Strangely enough, the woman is not in the least concerned or anxious about her imminent poverty.

On the contrary, by getting rid of her money, she also gets rid of her prejudices, becoming more good and tolerant towards others.

Although she never talks about it openly, we understand that this woman is close to death and chose Paris as the landscape of her last living days.

But the director decides to stay on the comedy road, never opening the scene to desperate drama searching for easy tears.

It is probably the best quality of French Exit: a movie to watch in relax thinking about life, old age, love, and loss.

Personally, I recommend it to people of all ages and social extractions because, rich or poor, you will be close to each of these adorable characters.