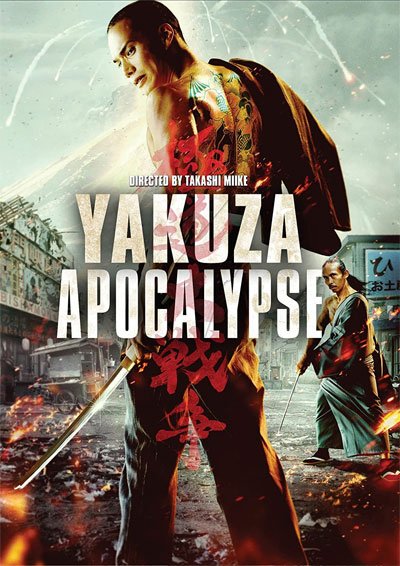 Yakuza Apocalypse takes place in modern Japan, where criminals take advantage as vampires of the helpless and straightforward sucker.

The only ones defending them are a small boss and his gang, remedying the injustices and oppression for ordinary citizens.

The man is violent and unbeatable in combat but decided to devote his strength to protect the innocent.

Over the years, he has made many enemies, and now they are eager for revenge because he has ruined business.

So one day, a band of grotesque warriors ambushes him and finally manages to kill him and then behead him.

His faithful sidekick, full of pain, picks up the head that surprisingly revives and bites him.

Indeed, the boss was so strong because, in reality, he was a vampire, and now he gave him his power.

While the young boy tries to understand what is happening, the bloodlust makes him attack some random people.

The contagion spreads among citizens quickly, and the streets are filled with vampires as a sucker as violent.

The Yakuza will be under attack by them and the gang of assassins, willing to kill even the vampire disciple.

Black comedy and lots of blood

Yakuza Apocalypse is one of the most entertaining, bloodthirsty, and entertaining movies made in Japan in recent years.

A story where madness operates on multiple levels, starting with the crime boss who dedicates his life to justice.

Man is kind and fair to the weak but ruthless to the bullies who would take advantage of them.

At the boss’s death, the general insanity makes a level jump with the arc in the scene of a series of crazy characters and very bad.

Despite their cheerful appearance from classic anime japan, these almost inhuman creatures are just as deadly fighting the yakuza with incredible ferocity and power.

Finally, when the disciple takes the place of the master, the city explodes in a delirium of continuous fighting between supernatural creatures.

Then the assassins will have to resort to their insane secret weapon, an invincible warrior wearing a clumsy frog costume.

A Japanese genius with multiform talent

Takashi Miike adds another valuable piece to his numerous filmography making a horror masterpiece of action and humor grotesque.

He combines violence, blood, and wickedness with criminals, sucker, vampires, and monsters of all kinds.

His talent exalts in passing different genres in the same movie, constantly changing rhythm and tone to the narrative.

His action scenes are fast and accurate in every detail, as we had already seen in the magnificent 13 Assassins.

The moments of violence are scary and bloody as in the best horror movies and wisely lightened with his intelligent irony.

Each character has his soul and identity, starting with Lily Franky as the boss and his disciple Hayato Ichihara.

The relationship between the two evolves fantastically from simple criminals to a tangible legacy of blood when the young man receives power from the dying older man.

Finally, among the various assassins, we mention the skilled martial artist Yayan Ruhian, always the right face to be a villain in The Raid: Redemption or John Wick 3.

Yakuza Apocalypse has never made it to American cinemas, except in a few festivals dedicated to Japanese movies.

It is a real shame for the significant distribution that promotes little and bad the great foreign directors, even when they realize great entertainment for everyone.

A Dangerous Method – Unlocking the...